Normally I try to not seek any media attention regarding The Rising MOD and have even gone as far as removing all past screenshots/videos because I'm a stern believer in only showing finished media, I do however think the TR MOD profile page is overdue for an update.

With The Rising MOD, our goal from the start has always been to blend the best aspects that we've liked in SP and MP games while also trying not to pigeon hole the MOD into any particular category or genre. I believe that when you do so, you subconsciously limit your creativity and instead focus on trying to "fill" the gaps of the genre you're trying to imitate when you should be making sure that the feelings and emotions you get from the material you are working from (be it a storyline or game play concept that exists in your head) translates well into game play.

For The Rising, the feelings and emotions we tried to translate into game play (for the Resistance side, not discussing Necrotroph game play yet) were fear and survival (I'm speaking generally about my definition of fear, i'm also including dread, paranoia, and anxiety). Now you may be wondering: "What the hell are you talking about?! How could you possibly translate emotions and feelings into game play mechanics?" Well, lets take a look at some of game play mechanics that The Rising has that instills both survival and fear into a Resistance player:

-Character bleeding: Once your health drops below 25 HP, your character will begin to bleed. This places a sense of urgency on the player to find a health kit fast or they'll either A: bleed to death or B: a Necrotroph will spot the player's blood trail and hunt them down (provokes both survival and fear).

-Ammunition Sharing: Sharing ammunition between teammates gives players an outlet to cooperate and work as a team (survival).

-Stamina System: The stamina system is a great game play mechanic that places a consequence and importance on almost all the actions the player can perform. Everything from: walking, running, jumping, carrying weapon(s), or using a melee weapon will affect your stamina in our game - potentially putting you in a vulnerable situation if you suddenly get ambushed with little stamina (fear).

-Ammunition does not re-spawn: This helps to encourage ammo sharing which in turn provokes a survival feeling.

-Remove remaining ammo on reload: Again, this also encourages ammo sharing but also puts the player into a predicament: do they reload their weapon if it's at ½ clip capacity and stay on the safe-side incase of a sudden large-scale attack? Or do they not reload and save ammo? This also places a sense of urgency on them because if they don't act quickly, they could get ambushed before they even make a decision (survival and fear).

-In-Game Map: In The Rising, they're no "floating" icons anywhere. The player is given a map that they can expand to A: figure out where they are and B: figure out where they need to go (a list of objectives is written on the map). While this may seem daunting at first, after the first few play sessions you won't really need the map. It's just there to help new players and initially instill the survival feeling.

-No side movement when sprinting: This is a great way for us to add a "con" to sprinting by focusing the players' view on what's in front of them by reducing side visibly and movement. By doing this, we can instill fear by the fact that they feel vulnerable when they sprint -- almost to the point where it encourages them to slow down and stay with their group.

Obviously, these are just a handful of game play mechanics and tweaks we've done to overall instill survival and fear into a Resistance player. Here are a few screenshots demonstrating visually where we are: 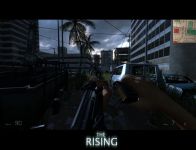 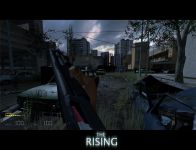 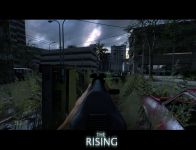 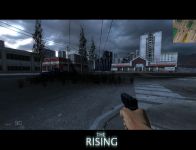 Well you have to look at it from the Necrotroph's point of view. What if you manage to successfully ambush a Resistance player and deal lots of damage... but they end up killing you? With bleeding we can effectively have "draws" where sure you may have been killed by the Resistance player but you at least put them into a bleeding state -- essentially killing them if they don't heal soon.

Have you thought of using silence as a tool for fear? in Valve games, sound/visual cues are used to draw attention to something/someone, but if there are no sound/visual cues, it can cause great fear in a player, Especially if the necro's are very silent. Kinda like in ravenholm, where you explore the city and the silence gets broken by the occasionaly headcrab or zombie.

P.S do you need modelers? i can help, contact me via pm. Im not an organic modeler, but i can do weapons/props, if u contact me, ill show you some of my previous work.

Those are some great ideas. Normally I use a mix of looping ambient music and musical ques within the map. Reading what you said, I actually may consider just dropping the looping music and rely more on silence and sudden Necrotroph noises.

i might have some more ideas if you need, but more importantly, do you need a prop/weapon modeler? contact me via moddb pm system. or do you have an irc channel or something, somewhere we can meet to talk?

The reloading-concept sounds interesting as it poses new tactical challenges for the players but like wilsonC I am not a big fan of "bleeding" as a feature, it really annoyed me while playing the otherwise fantastic "Get a Life" mod, nonetheless I hope you´ll find a solution that is both balanced and fun, looking forward to play this mod! :)

I haven't played Get a Life but so far to me, bleeding in TR hasn't really annoyed me. The map consists of multiple objectives that you complete in a certain order, each objective (If you successfully make it there) has ammo and health kits. So if you are bleeding it's not like you are totally out of luck, it just places a sense of urgency on you to make it to the next objective quickly.

Also if you think about it, bleeding also helps to prevent camping. If you have a few humans trying to camp, wounding them enough to cause bleeding forces them to make it to the next objective to find a health kit -- which In my mind is a good thing.

Thanks for the swift reply, operativex! Good to hear that you ponder on the consequences of each feature so thoroughly, amplifies my hope that this mod will be well-balanced! :)

Sure, my pleasure! :p

I'm so scared that I can only run in a straight line...

Think BF2 style running. It's actually realistic if you think about it, have you ever seen someone sprint-strafe? I haven't...

Play counterstrike. People do it all the time.

I mean in real life.

at last, an interesting horror concept.

Theres been a LOT of pathetic 'zombie' mods springing up lately, all copying the same thing...

Screenshots remind little bit of I Am Legend movie. There is some great concept ideas so far, hopefully you managed do them without compromises.

Interesting read, I hope to see this happen. :)

Interesting ideas you got there, all the features sound well... and together they'll do a great game, I assume.
And about the reloading: how long will it take (approximately) to reload a weapon?