Possessing unmatched firepower and protection for a ship of its class, as well as a full carrier air wing, the Retivvy Class Cruiser is the indomitable will of the Soviet Union made manifest.

Ship and crew have completed 17 days of nearly continuous offensive action, and am happy to report both are performing well. As reported by Intelligence, enemy units within system are centered around Savelev, with only minor Kriegsmarine units deployed to outer markers. 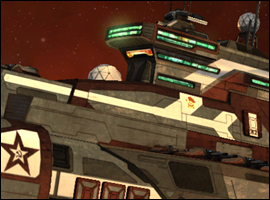 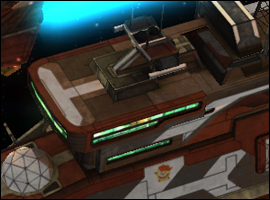 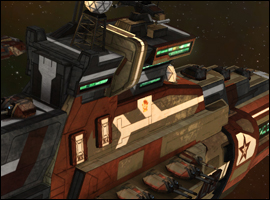 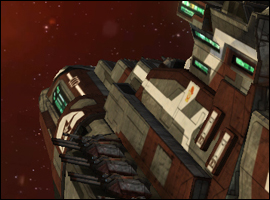 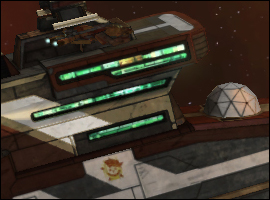 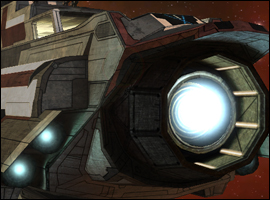 After moving to engage suspected enemy supply convoy, intercepted en route by Kriegsmarine cruiser (suspected, yet not confirmed as the Hessen). Initially caught out of position and struck by roughly thirty enemy rounds, none managed to penetrate causing only superficial damage. Counter fire consisted of a single starboard broadside, detonating target's engine and resulting in a terrific explosion.

With the destruction of these two vessels, enemy forces within the area can be considered negligible.

just one question : does the turrets can rotate ?

They cannot, from what I understand, as it's hardcoded into the engine (I could be wrong however, I'll let Hydrocarbon clarify it).

Correct, and the only real 'fix' is a messy hack that really isn't worth it. Instead, each weapon has a 'cone of fire' and the ship will automatically attempt to align the side of vessel with the highest DPS output (except for the rear, which is no checked in this 'search'). This means the in most cases the ship will try to engage enemies with either of its broadside batteries. While this lack of turret rotation is somewhat displeasing on a visual level, all the ships thus far still look excellent in action.

tok, if I was wrong about anything feel free to correct me.

nah you nailed it. this is probably why sins guns are typically inside the mesh - you can rationalize 90 degree arcs and no turret rotation if it's just a gun port or whatever.

but yeah, it looks good anyway. we'll be showing off the weapon effects in videos which should illustrate how well broadside combat works in motion. we made a lot of changes to physics to allow larger vessels to have more naval-looking turning and such to go along with it all.

I don't believe they can. I'm assuming that since a vanilla Kol Battleship can't then it can't either.

thanks for help making it happen comrade.

wonderful work keep it up