Rebooting is sometimes necessary on your computer, and sometimes the same need occurs for a project. In our case, it was a tough decision last year to do a full reboot and for a while, it seemed like we were going nowhere. But as we were taught, not giving up the hope can be rewarded - and it did for us. But let's start at the beginning...

Working on Star Wars: The New Era always had its ups and downs. Sometimes, we were amazed by the sheer quality that our artists delivered, sometimes we had to surpass extensive breaks due to the lack of coders. Motivation grew and faded with the actual progress on the mod, while the original target release date in 2008 couldn't be kept due to large technical difficulties. What followed was a period of patching and trying out new ways, which eventually led us to a working version of the mod.

The enthusiasm wasn't kept for long though, since we found out that we didn't meet our own expectations, which used to be very high at Invision Games. The gameplay prototype just didn't feel like it was enough to provide a long-term motivation to play the game. As a result, a difficult decision was made by the team: We did a full reboot of the project, which included a new gameplay concept and an entirely new codebase, which was provided by Valve's new SDK template. The only problem: The new concept required even more extensive coding capabilities, which was exactly where we were lacking.
In fact, this situation resulted in a large break from development that took almost a year and TNE fell into a slumber. At this point, several of our team members lost the confidence that the project might get back up on its feet.

Sometimes, you're lucky when you expect it the least. At Invision Games, we thankfully experienced this kind of luck. In August this year, we started experiencing some unexpected interest in our project with several new additions to our team. Øystein 'Maestro' Dale from Norway joined the team as lead programmer with Igor 'sayon' Jirkov from Russia and Cyrus 'bigfoot' Lyons from the UK supporting him. On the artist front, Patrick 'Watchtower' Rourk, Gaybacon (both from the US), Morgoth (Netherlands) and TheDee (Estonia) breathed some fresh air into the project with new ideas and creativity.
And so, TNE picked up pace again quickly, which also led to retired team members gaining interest again and joining back active development. Since October, we've experienced a productivity that we've never achieved before. With over 300 updates in this period, the game is growing as quickly as never before. We have now established weekly developer meetings and test sessions for our first alpha builds. 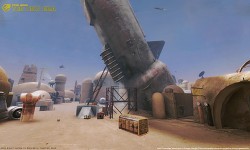 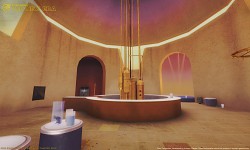 In order to reflect our entire reboot, we also overhauled our entire website. Our new media section contains a selection of screenshots, videos and music pieces composed for our projects. Yes, projects! We currently have another project in development and picked up a new separate developer squad from the German game design university MD.H in Düsseldorf. Unfortunately, we cannot disclose the nature of this project yet, but we promise that it's gonna be a surprise! 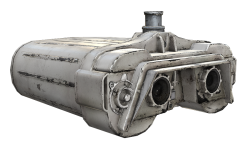 At last, I would like to thank all of you guys who have had faith in us. We're happy to announce that we'll open up closed beta tests in the near future, so stay tuned for more information to come!

:O This made my day <3 keep being awesome

"Much to learn, you still have."

Congratulations, this is indeed great news, the mod has survived. I know I speak for everyone that is watching this mod and others who will certainly join on later when I say that we are eagerly awaiting your first beta!

I'm happy to hear this. I remember first hearing about it a long time ago on the Movie Battles II (JKA mod) forums and got a great feeling about it.

Yay! :D
Keep it up untill the end!

A brand new start means brand new followers too. You just got one more ^_^

Everything is looking perfect so far. Keep loving what you're doing.

Amazing great job so excited to hear this. Keep us up to date!

I just looked at the updates on the main page and saw this, and I'm tracking. Sounds cool! :D

Great news! The new stuff looks great and best of luck in the future.

you can do it!

Awesome guys best of luck to you

AWWWW YESSSSSS!
I've been waiting so looooong and to know now that you're back in business is so relieving.

Good luck with the reboot.

Good to have news.

Fantastic news. Was wondering where this had gone.

long time no news! I'm happy that your are alive =) Good luck!