Analysis of Cogmind's food clock mechanic in the context of roguelike food clocks in general.

Traditionally a majority of roguelikes include some sort of food system. Hunger management does seem like a natural part of role-play adventuring, but it also serves a much more important function: Pushing the player along is an integral part of [most] good roguelike design.

All but sandbox games present the player with a specific goal to aim for, though achieving that goal should be about more than a brute force grind to become unstoppable. Of course we could simply use various means to directly cap player power, like stat ceilings or limiting the amount of items available, though I'd argue against these methods because they essentially take options away from the player. From a player's point of view, the constraint which affords the most flexibility is how much time they have to achieve the goal--within this constraint the player can do whatever they want.

Using an arbitrary turn count (the roguelike equivalent of a real-time timer) is one option, though a rarely used one. Why not give the player some amount of control over the mechanic?

The most common food clock is, unsurprisingly, actual food and hunger. It's easily understood, and the timer becomes closely integrated with elements of the game mechanics themselves (searching, combat, looting, identification), making it feel more natural. 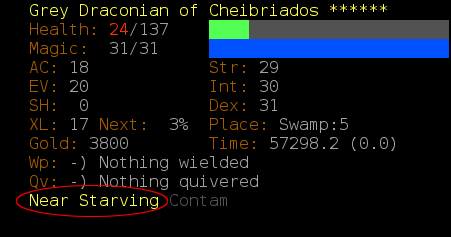 You won't see this in Cogmind.

But food doesn't work for all games. Some take place in an incompatible setting, or prefer to avoid the burden (on either designer or player) of integrating it with the game's other mechanics.

One common alternative is to have some dire threat chasing you. This is more literally something behind the player "pushing" them to advance. FTL uses this mechanic.

Any food clock puts a (sometimes soft) time limit on the player's game and therefore limits what the player is capable of. The endlessly leveling mummy trick (mummies don't need to eat) in old versions of DCSS is one example of what happens when a food clock mechanic breaks down in a generic roguelike--the developers had to introduce a new spawning timer mechanic to deal with that and similar scumming behavior.

Regardless of the method used, they all benefit the experience by pushing the player forward. In a broader sense, being pushed along forces decisions, counteracting the player tendency to postpone decisions as long as possible, or at least until sufficient knowledge or ability is obtained to ensure a certain outcome. This tendency is at odds with the core roguelike experience--solving randomized problems. It's an inherently less interesting way to play a game since it removes most of the challenge. (One exception would be those players who are "just along for the ride" when they play a game; definitely a minority of roguelike players, though perhaps more common with AAA games that focus on style rather than substance.)

More specifically, food clocks cut down on grinding, which is good design. (Unless you're trying to make an addictive MMORPG or similar that milks poor gamers for their money/time.) Those who grind will likely have less fun in the process, and anyone who doesn't grind will consider the game poorly balanced or outright unfair. In other words, a food clock is saving players from themselves. Herein lies a golden rule of game design: If the optimal way to play a game is to do something boring, players will still do it even if it makes their experience less enjoyable. Thus a well-designed game should strive to avoid rewarding this kind of behavior.

Cogmind's goal to provide a grind-free experience goes hand in hand with pushing the player along. A food clock is essential here.

So what about food for robots? Well, we could artificially require some resource as a substitute, but I'd rather not go that route. I don't particularly want another resource management sub-game that ties into everything else, nor is there a need for one.

Cogmind instead wraps the food clock more directly into the existing game mechanics, specifically stealth and combat (and by extension play style).

The more you affect the environment, the greater the enemy response to your presence. Remaining stealthy is one way to postpone a stronger response, and I believe that as a more difficult challenge, successful use of stealth is a very valid way to operate outside the normal food clock. But once you mess up and the fighting begins, the cumulative effect of your presence can eventually snowball into a big mess. This increases the pressure to leave the area. Theoretically you could continue to fight, but against an unlimited army you can only lose to attrition. Did I mention you can't repair your core? (Note: The "presence" effect is less pronounced through the first few depths to make them a little easier; in the 7DRL the first three Materials floors didn't have any pressure to move on at all.) As Cogmind grows more powerful, though, you evolve to cover your core with more parts and attrition via integrity damage becomes less of a threat. It's at this point in the game, about one-third through, that electromagnetic damage appears. EM damage is the game's original (and most convincing) food clock mechanic.

Regardless of where they impact, hits taken from EM attacks can result in system corruption, which in turn causes all sorts of nasty things to happen. Current list of random effects due to system corruption:

As system corruption accumulates from subsequent attacks, the random effects progressively worsen and grow more frequent. Corruption can even kill Cogmind if it reaches 100%, though the side effects are likely to be deadly long before then.

In case you haven't yet noticed the side effects,
while corrupted your map will also occasionally glitch as a reminder.

Corruption resets to zero on reaching each new depth (because that's when you evolve), so suffering the effects of corruption can be a very powerful motivator to forge ahead. Cleaning system corruption any other way is not easy.

Aside from corruption, in the mid- to late-game main maps (as opposed to side-routes) your location will occasionally be pinpointed and a strike team sent to deal with you. While Cogmind is more than capable of dealing with one of these teams, engaging them is tempting you to begin the whole snowball process of you interacting with more and more of the map's inhabitants, attracting attention and increasing your "presence." There are other strategies for handling these teams, but those are for you to discover ;)

Reinforcing this whole food clock system is the fact that you can only move forward in the world--there is no way to revisit previously explored levels. But that's a topic for another post.

Upon one of the random effects (more specifically, "Data loss: Forget what certain parts do--they become unidentified") is the player able to add to the text of it? Being a computer/machine it would make some sense, and add to the game (i think).

By "able to add to the text of it," I presume you are referring to the traditional roguelike ability to add parenthetical/bracketed notes to an item's name? You can't do that in Cogmind, *but* I promise you'll never need to! Forcing you to do that for optimal play would be poor design.

I could've made that particular list item more clear: You can't forget anything about items in your possession, only information about items you've encountered previously but don't currently own.

And by the way, since this post was written I've added some more fun effects, including misfires--think twice about attaching deadly weapons when under the influence of corruption ;)