A competitive multiplayer action game about coercing your opponents into acting against their own self interest.

When I tell people that OBEY is a game about coercing other human players into doing what you want, more often than not they respond with a question, something like:
“That’s nice, but how does THAT work?!”
(AKA why would any opponent do what I want in a game?)

It’s a very good question because far as I know, this feature is unique to OBEY. The only similar examples I can think of is the gameplay in the CS Jailbreak mod, or maybe some scenarios I have seen/read/heard about in DayZ where players sometimes coerce each other for fun. Even though coercive play is a centerpiece of the Jailbreak mod, in my opinion it is such an unbalanced and primitive experience to play the mod that I hesitate to count it as a full-on “game”. And in DayZ, the ability to allow players to coerce each other seems intentional, but occurs mainly as the side effect of two factors: 1) that dying matters, and 2) players are given enough freedom that they can make up their own sub-games. Hence, to my knowledge, OBEY is the first video game to embrace and (attempt to) balance opponent coercion (players’ own, pro-active violation of their own self interest) as it’s central gameplay theme… Well, it is inspired by authoritarian systems of influence, after all.

-Blah Blah, so how does it work in OBEY?-

So here is how it works in OBEY:
To win in OBEY, you must have the most ¢ at the end of the round.
Players gain ¢ (points) automatically over time. Any player controlling the robot (we’ll call that player ‘robo’) gets 10x the ¢ per second than players outside (‘bunnies’). You take control of the robot by going into a door at the base of his platform.
The gameplay fluctuates between two different states. The first, ‘superficial’ state, is how the game is played naturally by anyone who first plays it. It is essentially ‘king-of-the-hill’. The bunnies try to reach robo, and robo tries to spot them and kill them so he can keep control of it. It isn’t terribly hard for bunnies to reach the robot (it depends on the map, but they probably have about 40% chance of success). If there are many bunnies, in all probability the robo’s control won’t last long. When a bunny reaches the robot he takes control, and robo and all other bunnies are respawned, to try again. 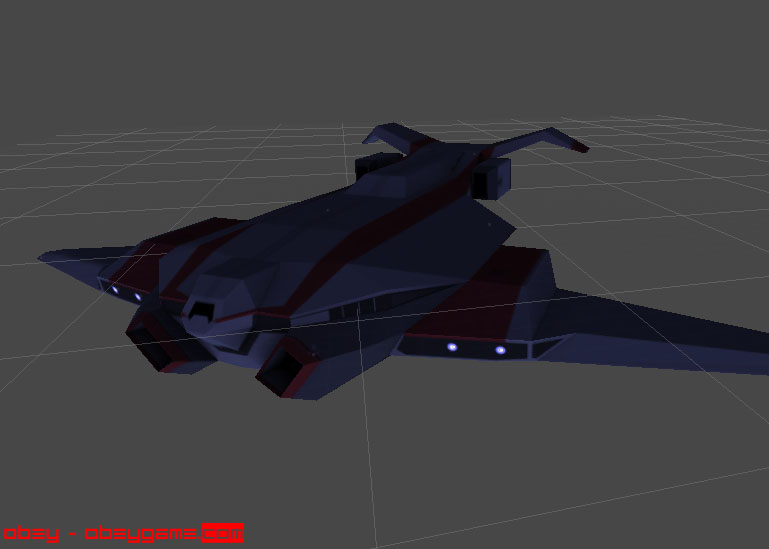 The game can be played like this, but there are different items robo can buy with his ¢. If robo is to buy anything, he must first buy a ‘drop ship’. Once purchased, killed players do not respawn in the map, but instead respawn inside the drop ship. The drop ship comes intermittently into the map and drops off the respawned bunnies. The function of this is to allow robo to penalize killed players with a spawn time. When they die, they spawn in the ‘purgatory’ that is the drop ship, and score half of their already paltry earnings while inside. The other problem for players if they die (and a drop ship exists) is that they will be dropped off right in front of robo where robo will know exactly where they are when they come into play. So dying is no benefit at all except for lost money and time. You might ask why then wouldn’t robo just kill bunnies again as soon as they get dropped off (constant spawn kill). The reason is because there does exist a way for bunnies to destroy the drop ship if they are inside of it, and if this happens the game will again revert to the ‘superficial’ mode (and this is disadvantageous to robo). Hence, a good robo player will want bunnies controlled, not dead. Therefore bunnies always have a viable choice to obey vs disobey when robo asks them to do things that are against their best interest, and robo has a viable choice to kill or not kill.
For example, let’s say you are robo. Among the things you can buy are a laser wall : 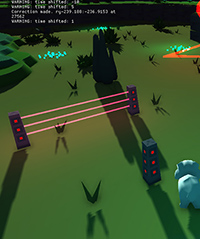 To use them you must coerce a bunny to place them for you. Placed properly, the walls will make it much more difficult to subvert you. However, if you get subverted, the drop ship and anything else you may have bought is inherited by that player. Hence a bunny may comply with the mind that they are simply building it for themselves!
Of course, they might not succeed at subverting you… in which case I guess they were acting against their own interest, after all.

That is great to hear!
I will be posting public playtests at some point soon, if you would like to play you can sign up for the kickstarter email list at obeygame.com or 'like' us on fb to get notified. :D