This week I've been busy working on the AI. Not too busy to make a cool military base though!

A brief update this week. I’ve gone back to working on the versus mode AI now the core mechanics are finalized, and it’s coming along really well. I’ve mentioned before that making an AI play this game effectively has been a massive challenge, but I definitely think the most complicated work is done now.

There are so many variables for it to consider when playing: Not just the +/- area effects, but how important every stat associated with the card is, how badly the ai wants to cycle through it’s deck, how much to value the elimination of it’s opponents points vs advancing it’s own, how much space is left in the column, etc etc. That’s only scratching the surface and not including the deck building aspect of the game, which is my task this week. All of the variables the AI considers are easily changed, which means I can create different AI personalities easily- something I’ll be utilizing for the game’s different characters.

I also have an awesome artist working on visually developing the rest of the characters for the game- I can’t wait to show you lot some of the personalities you’ll be playing with and against!

Building development is slower but steady, it shall pick up again once the AI is in place as that’s been such a huge part of the workload this week. But I’ve still found the time to make a cool military base! 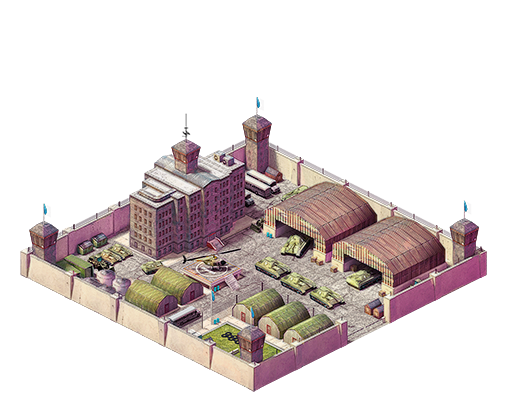 I'm a bit confused as to the tanks in the airport hangars, but still. Looks great! :)

They're either tank hangars or flying tanks ;)