Lots of time passed with too many updates to fit in one news post so it has been broken into 6 weekly parts. Here is therefore part 6/6. This last update took a bit longer due to technical problems (still ongoing) at ModDB.

The ISG HQ is the first map location the player visits starting out the game. It is a large building hosting the HQ of the ISG (International Security Guardians). Streching 92 meters in length, 48 meters in depth and standing 17 meters tall this building is quite the sight in the city. The building consists of 4 floors separated into a left wing complex and a right wing complex. All floors and all rooms are fully accessible. As a starting point I used a little diary entry written by Georgo (the main character):

The large glass doors sled open nearly silently when I approached them. Everything in this place is riddeled from one end to the other with high-tech stuff. Not really my kind of world but Sam for sure is going to be all over this. Which reminds me I haven't seen him around since this morning. Twiddling a cigarette in my hands I stepped out into the glaring sun.

"Smoking is prohibitted inside the building". The voice of the security office still echoed in my head. Telling a smoker that he is not allowed to abide to his most valued hobby is like a punch in the face. A couple of flags greeted me on my way down to the lawn in front of the building. The ISG logo painted on a blue-gray background they wiggled gently in the morning breeze. I did not take any cigarettes with me into this new world so I am stuck now with whatever replacement they offer here. It looks like a cigarette, and to some extend tastes like one but it can't compete with the flavor I grew accustomed to. With the smoke raising I decided to take a quick stroll away from the building. In the lobby I caught a glimpse of some informations jotted down on a plate near the entrance. "With 92 meters in length, 48 meters in depth and 17 meters in height the IGS HQ building is one of the largest buildings in the city". They definitely didn't lie about the size. It took me some distance to catch a better sight.

The HQ building is located on a little hill-side towards the border of the city. Right behind the river closes in and provides a nice ambience. Whoever constructed that building here did a good choice of location. Most part of the facade consists of large windows glistering in the burning sun. The clouds reflect a great deal in the windows. Szack told me once that the windows are half way mirroring to prevent eves-dropping from the outside. The effect definitely pays off in both design and functionality. From the outside the HQ looks like a giant mirorring turtle ready to shrugg off whatever you throw at it. Or maybe not really a turtle, unless turtles are of blueish color, made of concrete, steel and glass. And turtles also don't carry satellite dished on their back. Glancing up against the bright sun I could see the silhouettes of most probably three satellite dishes on the roof top. I can not say how large they are from down here but compared to the height of the levels below their size is definitely not to be sneezed at.

Looking up at the building, chewing on this "new world" cigarette of mine of remarkably mediocre taste, I noticed somebody or "something" located in front of one of the satellite dishes. The sun did it's best to prevent me from recognizing what it was but I had my hunches. Szack dropped a line an hour ago which came to my mind now. I should definitely pay the roof top a visit. I looked down on my cigarette. To my astonishment I already finished it. So the cigarettes in this "new world" do not only taste mediocre, they are also gone in a matter of moments. I decided to put my cigarette out of its misery, grinding it on the ground as nobody is watching. Pocketing my hands I headed back to the front entrance of the building. I won't be able to get up the roof unseen during the day. Since we had though been allowed to stay here until our flat is ready I should be able to take a look that night. It never hurts to poke your nose into what is none of your business. After all that's my job.


The idea here is to create places which are not the typical sci-fi mold one sees all around the place with tons of tech corridors with more metal than one can bear. For this reason various materials are used in the building which are not metal like wood, marmor floor plates, sort of carpet as well as glassy materials. This is more or less the bare-bone building and requires a lot of additional work especially adding lots of furniture and people working at this place. Various models have already been created like the tables, tv screen, the wall clock or the desk pad (a sort of electronic blotter pad). 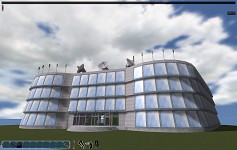 A nice little effect is the lighting at night. Once the day time enters night time the internal building lights are enabled. They are though smart and only operate in areas people are in. In the video below this can be observed. The lights have a dimmer code included so they gently brighten and darken when you enter or leave the sensor area. The lighting currently is all dynamic but will be enhanced using static lighting to add some more punch to it. To handle this properly the Trigger System has been improved using a per-World Trigger Table. This way many and complex triggers don't cost much performance. The day time is going to have a large impact on the game. People have an own agenda they live by. If you want to talk to people this is best done during the day at their office place or at the evening at home. Breaking and entering is best done during the night. Meeting shady people is also more successful at night. So planing your actions is going to be important if you want to get down to the bottom. 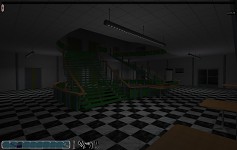 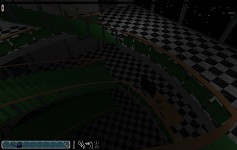 To end this news pack here a video of the ISG HQ work in progress. The video starts out with me visiting a few of the rooms in the building. Then I go to the extreme ends in each wing as well as all the way to the top floor and the ground floor. All rooms can be visited unless the doors are locked because the owner is not around. I then run around the building to given a better impression of the size. Last but not least the night time lighting in the building is shown. As with the last time the video is way too dark at night. See the screenshots above on how it actually looks like. There is still a lot left to do including putting back in place some optimizations which are currently disabled (as they applied to the now gone Terrain System).


The news pack is over but not so the development. The next news post is going to talk a bit about the GUI Launcher which has been created recently.

Awesome, that HQ reminds me of the Carrington Institute in Perfect Dark, I hope it will have the same feeling as well. :)

I like the structure of the HQ. It looks very defensive!

The video was nice too.