As promised, a total of three additional screenshots have been uploaded before the weekend began. But don't worry, there's a good chance there will be another screenshot or two during the weekend as well!

I've been working hard on the terrain, as usual, and overall I think I've made enough progress to show off. Though probably still not enough, despite some of the significant changes I've made within the past two or three days of terraining. Nevertheless, here's two screenshots of the Valley of Trials. Keep in mind the zone is very much incomplete! 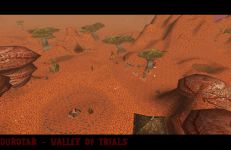 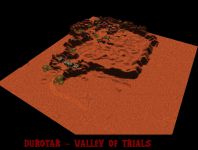 The 'overview of the map' screenshot is mainly to show off how much is done/started and how much is left to go.

The changes to the terrain this time is that I added several new mountains, modified already existing ones, created some more hills (accurately of course, like everything else), moved trees, resized and repositioned a bunch of other stuff, added water, yadda yadda yadda... lots of new stuff, but I think most of it is subtle. Will try to get another screenshot uploaded by the end of this weekend. Perhaps more than just one... who knows.

Yixx is making a lot of progress on the Character Creation screen as always and he's polishing up a lot of it. It's still not quite near completion yet, but it looks pretty damn good so far. Not going to reveal anything yet until it's done though, so you'll all just have to wait!

Aside from all that, Shamanyouranus has finished the model and texture of the Mulgore braizer model (a small totem-looking torch thing that you see alongside roads in Mulgore and The Barrens) but the texture will be improved by Hawkwing. Once it's done and in my hands, I'll most likely do some more terrain work on the Red Cloud Mesa area of Mulgore - starting zone for the Tauren.

Sounds good.
Also sounds like you're quite a small team working on this (3 including yourself).

Not that I'm capable, but rather out of pure interest, I'd like to ask if you're actively searching for teammembers, since this project sounds a little big for a 3 man team.

We mainly just need modelers and texture artists. Though, a good animator would be awesome to have too!