Another article of the ongoing development of the Star Wars total conversion of Freelancer.

Over the past two weeks the developers have been hard at work in many departments of mod development. The most notable work has been made in two areas in particular, systems and scripted missions.

To give our followers a glimpse of the detail we are incorporating into the mod, I'm posting an example of the system design process. This development excerpt is of Munnilinst.

Deety wrote: System Overview
Muunilinst belongs to the Empire. It has no shipyards hence it isn't as important as Fondor or Bilbringi. However, it's a frontline system and that's why it's a interesting system from a tactical point of view. If you look at the galactic map, you'll find out there are three frontlines between the Empire and the New Republic. The main one is Coruscant-Bilbringi, but we're going to saturate the area with NPC ships making it impossible for anyone to cross it without a huge fleet. Two other ways of entering Imperial space remain : Fondor and Muunilinst. Because it is located in the northern part of the galaxy, which is more quiet, it doesn't require as much defenses as Fondor (remember the Imperial blockade in Fondor), but it must be defended. Threats come from the Dathomir buoy. You have to remember this while adding scenery ships. 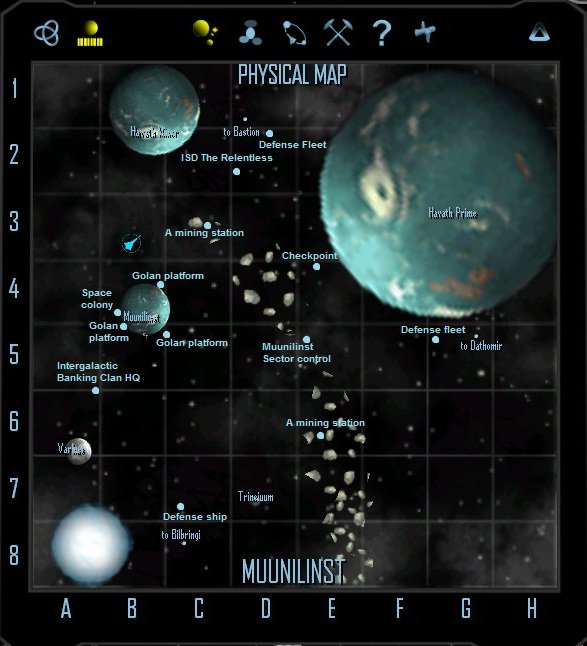 As you can see, the whole asteroid ring is the first and main defense against ennemy threats coming from Dathomir. You have two ways to go further in imperial space : there is a hole around the Muunilinst Sector control, and you can flank the asteroid field if you go to the north.First, i've slightly reduced the hole at the Sector control by adding two small asteroid fields (the hole was 60K long and i reduced it to 30K). Then, i've used defense fleets:

Defensive fleets
The main defensive fleet is around the Sector Control. No need to add dozens of ships : i've used 7 vessels, ranging from the Lancer Frigate to the Victory Star Destroyer. With a VSD and an Escort Carrier, it's a very missile heavy battlegroup. I've also added an Interdictor cruiser in order to make this area a chocke point. 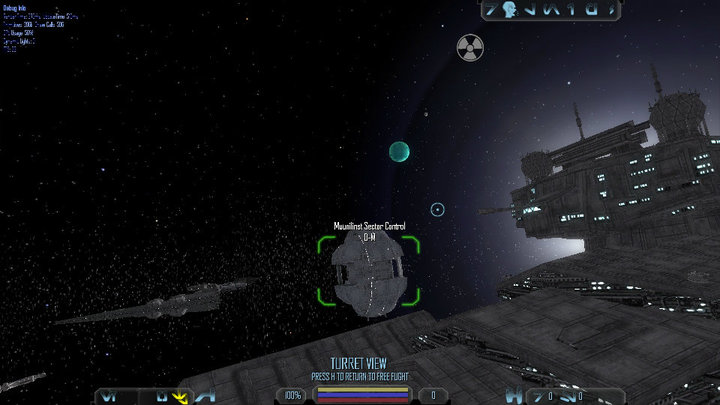 The other main fleet is where i've added a Checkpoint on the map. I've added a destructible station there, too (you can't see it on the picture below). Imperial Sector control is an imp_station so i've chosen a imp_outpost for the station. The fleet is also composed of 7 ships including a VSD and an Immobilizer. 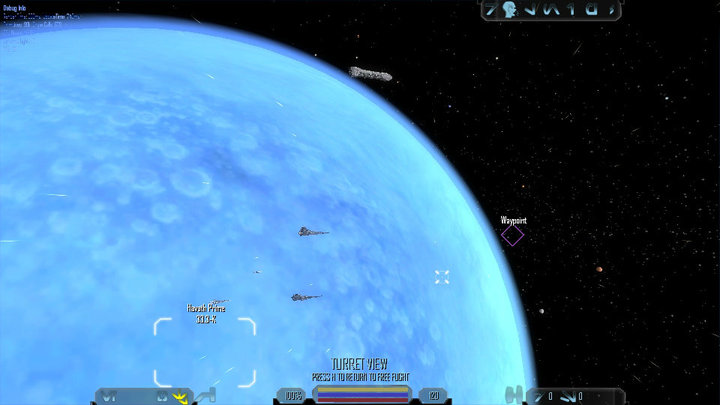 The remaining defense fleets aren't as important. Basically, they're just purely scenery fleets and aren't very important for gameplay. There is a Carrack cruiser at the Bilbringi buoy, an ISD and some smaller ships at the Bastion buoy (because Bastion is the capital), and some cruisers (1 Strike, 1 Carrack & 1 Lancer) at the Dathomir buoy. Remember we don't want to add huge fleets that would cripple players directly on the buoys (expect in Bilbringi & Coruscant, where we don't want players to survive). That's why the fleet at the Dathomir buoy is quite small, while the checkpoints are farther away. One or two frigates / corvettes are enough for most of the buoys in Imperial & Republican sectors. In the outer rim, most buoys will remain undefended.

Civilian structures
In Muunilinst there are 2 civilian stations : planet Muunilinst itself, and the Intergalactic Banking Clan HQ. I've added 6 weapons platforms around the latest. I've also added a docked Star Galleon freighter and a docked Modular Conveyor with a container next to it. Both freighters have no loadout : they have no shields & weapons, as they're docked. 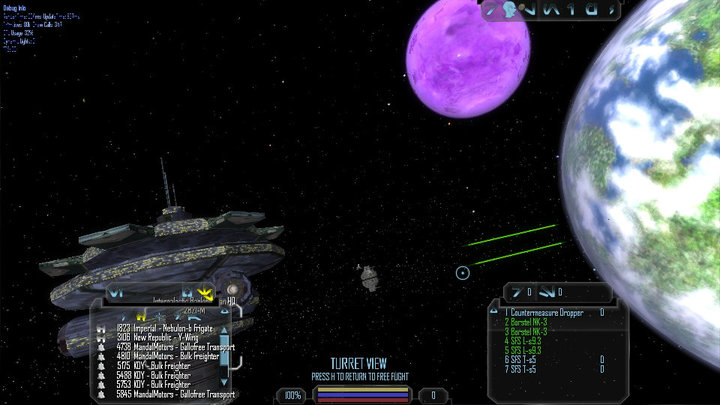 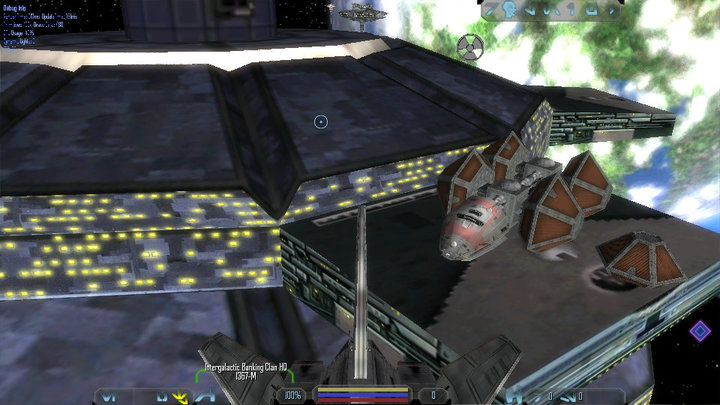 Planet Muunilinst was more interesting. According to Wookiepedia there were Golan III battlestations around it so i've added three of them (check the map). One if covering the docking buoy, while the two others are just here to be eye-candy. I've also added a Colony2 space station around the planet. I think it's a quite good idea to add colony stations around planets, they fit nicely (don't add them around planets in Doornik or Yavin for instance. Keep them for planets with a large population, such as Coruscant, Corellia, Bastion, Nar Shaddaa...). 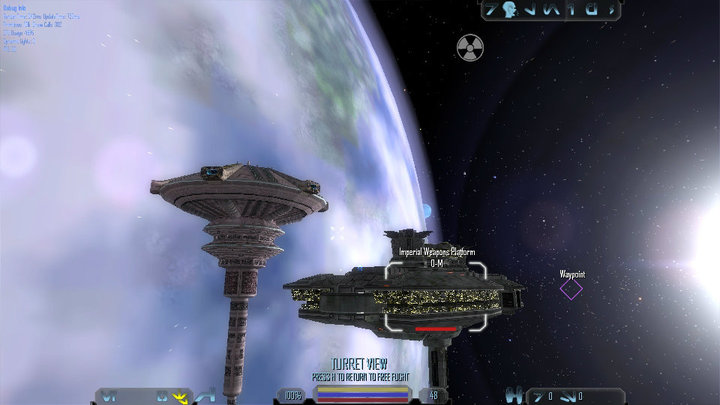 Look at the stations in Tow\solar\bases. We have incredible designs there and i'm sure you'll find great ways to use them. For instance, reinforce any large shipyard with a X-7_fighter_factory or a destroyer_yard . Add kaliida_shoalds-style stations around Thyferra. Space outpost could be used in Pirate / Hutt space. XQ-1 platforms can be used everywhere...

Local events
This is the last part of the scenery job : i've added several bases hidden in asteroid fields or behind planets. I've also added a small area with NPCs around them. We want players to patrol the system, look for them and attack or defend the stations. For instance, in Muunilinst i've added 3 Mining bases ("mining_outpost". Sometimes i use the "research_outpost" too, it fits quite well) and a rebel ship (nebulon-b) hidden in an asteroid field. I've also added 2 pirate bases (a static ship & a "pirate_wreck_outpost") behind Varhus and a moon of Havath Prime. 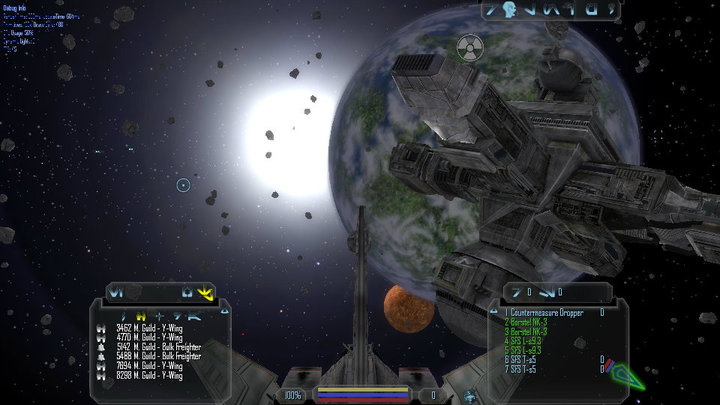 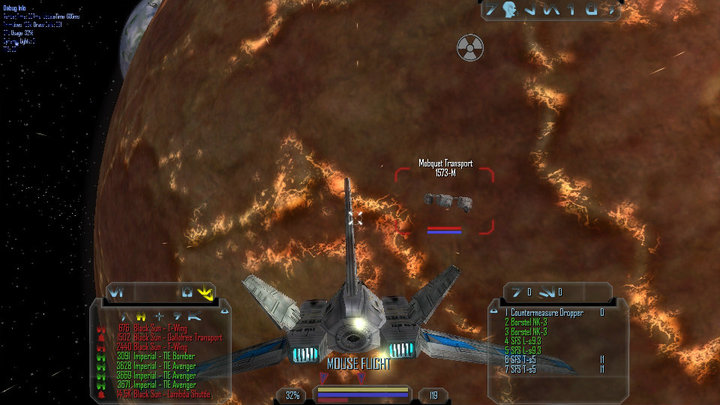 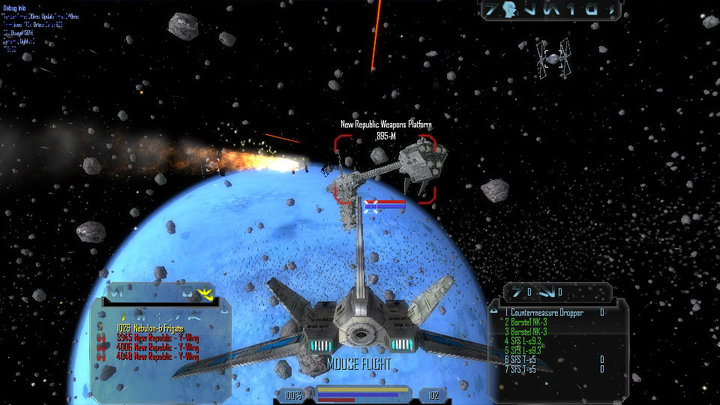 The second thing I wanted to show our fans is about our custom missions. Thanks to W0dk4's talents, we're now able to script missions from scratch and have them work in multiplayer. What does this mean for you? Well, we're hoping to recreate missions of X-Wing vs. TIE Fighter and X-Wing Alliance to allow fans to relive their favorite moments of those games as well as add another level of depth of to this mod. There also will be rewards for those players that are fortunate enough to complete such missions. Below is a quick excerpt of our first scripted mission:

Deety wrote: General description : the mission is played from the New Republic point of view. New Republic forces are composed of two squadrons : one Y-wing squadron (3 waves of 4 ships) and one X-wing squadron (3 waves of 4 ships). The target is a Victory star destroyer which is defended by his own starfighters (2 squadrons : 24 ships. There will be 2 waves of 12 ships). Also, expect some starfighter reinforcements later in the mission (1 TIE Avenger squadron) 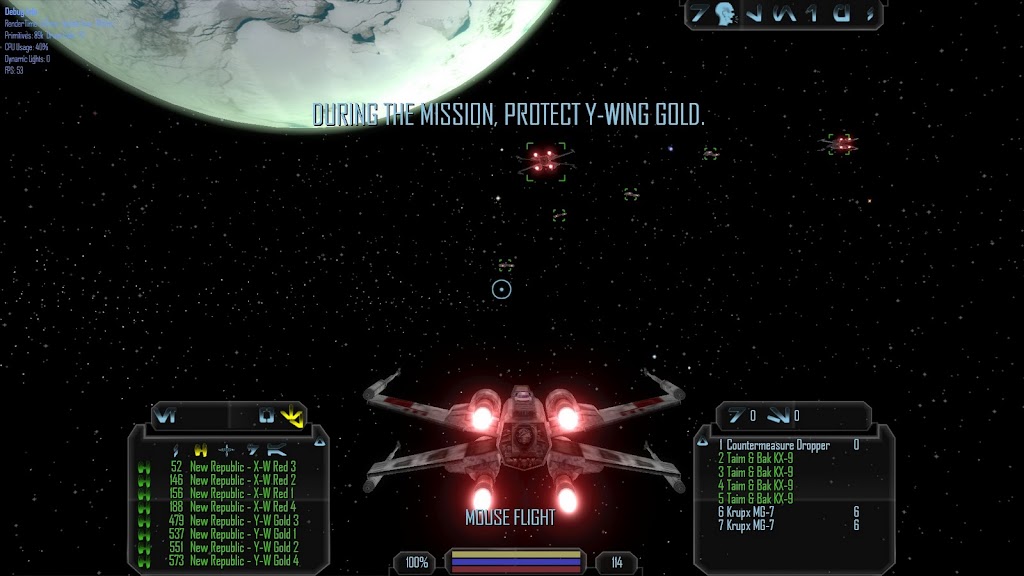 And lastly, I'd like to invite our fans to another Live Q&A as our last one was so successful. We will be holding this Q&A session on Sunday August 15th @ 14h00 EDT. To keep our questions organized, we have organized a Google Moderator account for our followers to post their questions. Feel free to post your questions there after this Q&A as we'll use them for our next session. Google.com

If you have any questions and want to see the mod live in game please come visit: Livestream.com @ 14h00 EDT on August 15th.

For help with the timezones, go here: Everytimezone.com. We're using New York as the standard time.

Sounds and looks very nice!
Just a short question: Can enemy players interfere in those custom missions or are they coop only? Either way, it's pretty cool :-P

No. It will be CO-OP only. You just run into too much trouble that way.

At least most of them will be co-op only. If you want a mission to be challenging, there is always a strong side (hostile faction) and a weak side (player's faction). If you add a player on the hostile side, it's just too easy for them to win.

But we may also add symetrical missions that can be played by two groups of hostile players at the same time. For instance, in the game X-wing vs TIE Fighter, there was a mission featuring a Rebel Dreadnaught against an Imperial Strike Cruiser. I can create this in Fw:Tow if you want.

Looks cool, but I think the UI could use a little visual update.
Nothing big, just making it shinier.

Hmm. Our UI is updated. The problem with updating the UI of Freelancer is that it's a massive undertaking with over 150 textures to adjust. What were you thinking needed to be tweaked?

What about Tie Fighter Collectors Disk for PC?

Will any of the missions from there be in this? (Maybe even the Freighter Scanning missions where you find contraband in the cargo hold, and you have to protect infiltrator frigates to board the Rebel ship, and protect from other threats.

That would be cool.

Awesome, The live stream was great. Answered all the questions and showed us some neat things. Loving the Star Destroyer guys! Every inch of it!

Thanks! Glad you enjoyed it.

this is awesome..... i can't fight the right words to describe how cool this really is.