Let’s kick some asses, literally. Now you can kick stuff in our upcoming release, and there's much more.

Hey, we used to release a new version during the summer in the past years, and we won't miss this one either. There were things to improve after 3.5, as we noticed how the gameplay suffered in some aspects because dual wield guns. And this wouldn't be a proper release without some cool and exciting new features, so here we go.

Now you can see your own body, self awareness they call it. If you can see it, you can use it as well. So let's do something like... kicking. A strong kick can push obstacles out of the way, can stop a pesky axeman, or can throw an unaware enemy out of a ledge. It's meant to be a defensive move mainly, also requires timing or you may get completely exposed.

It also means our melee combat is becoming more deep and fun. So it's a good time to introduce a melee only arena: fof_brawl. This was a visionary idea by a community member called Smiechu. Praises to him. It also comes with a new feature, now custom maps can define which equip items are active and how much they cost. 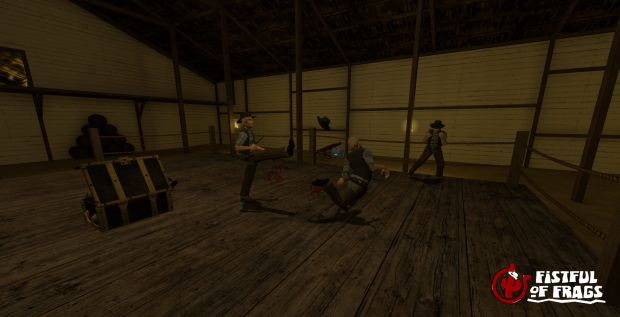 This is important as well, strafe jump is returning. It was present during some versions but it lacked the necessary polish. Now it has been reworked into a better, more balanced implementation. It's granted once you equip boots, which also boost kicking (damage and push force).

Dual wield handguns have been probably our biggest and more costly feature ever. They weren't easy to balance either, so we are trying to fix this in 3.6. The cone of fire increases a lot less along each fired shot and there's stronger recoil to prevent spamming. There's also a natural penalty applied when using duals, you walk slightly slower than using only one handgun.

Whiskey is receiving some interesting additions too. You can carry the whiskey jug along a handgun, two can be equipped (even used at same time) for increased healing power. Your teammates will see a glow outline around whiskey carriers so they are located easily. And finally, giving whiskey to teammates also gives them a temporal drunkenness vision effect. 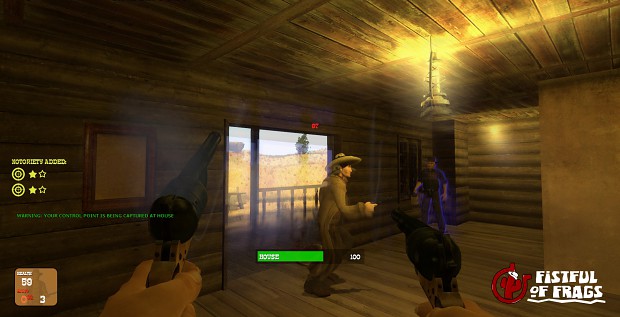 Finally, many maps have received some kind of update. To name a few, Railhouse (released in 3.5) has been reconverted into a NPC escort mission, another community member called Verrueckter_Iwan suggested this. Vigilantes must reach a place with a NPC which is very much like a mine cart, cannot be killed and just moves when a friendly is around him. Enemies can kick the NPC to slow down vigilantes progress. You gonna like it, I promise ^^. Other maps have seen important updates, like Monument Valley (reworked second stage) or Tramonto_lite (symmetric layout) .

Well that is all, this update is meant to be released along next week. Stay tuned!

Slowmotion kicks just don't have the same dramatic effect, when your enemies immediately start walking in the air ..

Nothing says "Badass" than dual wielding 2 whiskey jugs in a middle of a gun fight.

Let's kick *** cowbow style mate !
This is getting better and better.

Giving Whiskey to teammates has a negative effect? I'm already predicting people getting mad over being healed.

I always said it would be fun to have melee only bar fights. And this was way back in 2.5.

I don't really play anymore anyways. Something changed that caused it to run worse on my machine (the riverboat is totally unplayable). Didn't care for the new mix and match dual wield either.

Cool, I wonder how the kicking will play itself out ingame.