To all FPS fans out there: Storm United is about to hit Steam Early Access!

I think its fair to say this week is going to be a special week for the PixelBeam team.

After a lot of efforts and personal sacrifices, reaching the state where your baby goes online and let everyone play with it is something I can't wait to experience.

It is not fully polished yet, hence the early access, but in all honesty it is not a broken alpha either, see for yourself with 100% true gameplay footage:

As of today, we have a stable FPS client/server framework, fun gameplay, 6 game modes, 8+ maps, 24 weapons and currently 2 different classes. A third class will be completed within a month (the Angel class) and the fourth will show up about a month after (The Hacker).

Sometimes people ask me how I would describe the particularities of our FPS setting aside the custom game modes, graphics and the sensation driven gameplay, so I thought I would explain the philosophy behind our development process here: As mentioned above, we think the game's foundations are done, we have a powerful weapon and camera system and combined with a the convenient network engine I want to say "The sky is the limit". In other words, now is the moment where our path is going to splits further away from other FPS titles.

So what's the plan? What path are we going to take?First of all there are 3 main guidelines we'll always stick to:

Keeping in mind those rigid requirements, we are empowering all players to suggest modifications, improvements or features through our in-game, custom community development tool we call the "United Developers HUB" (UDH for friends). 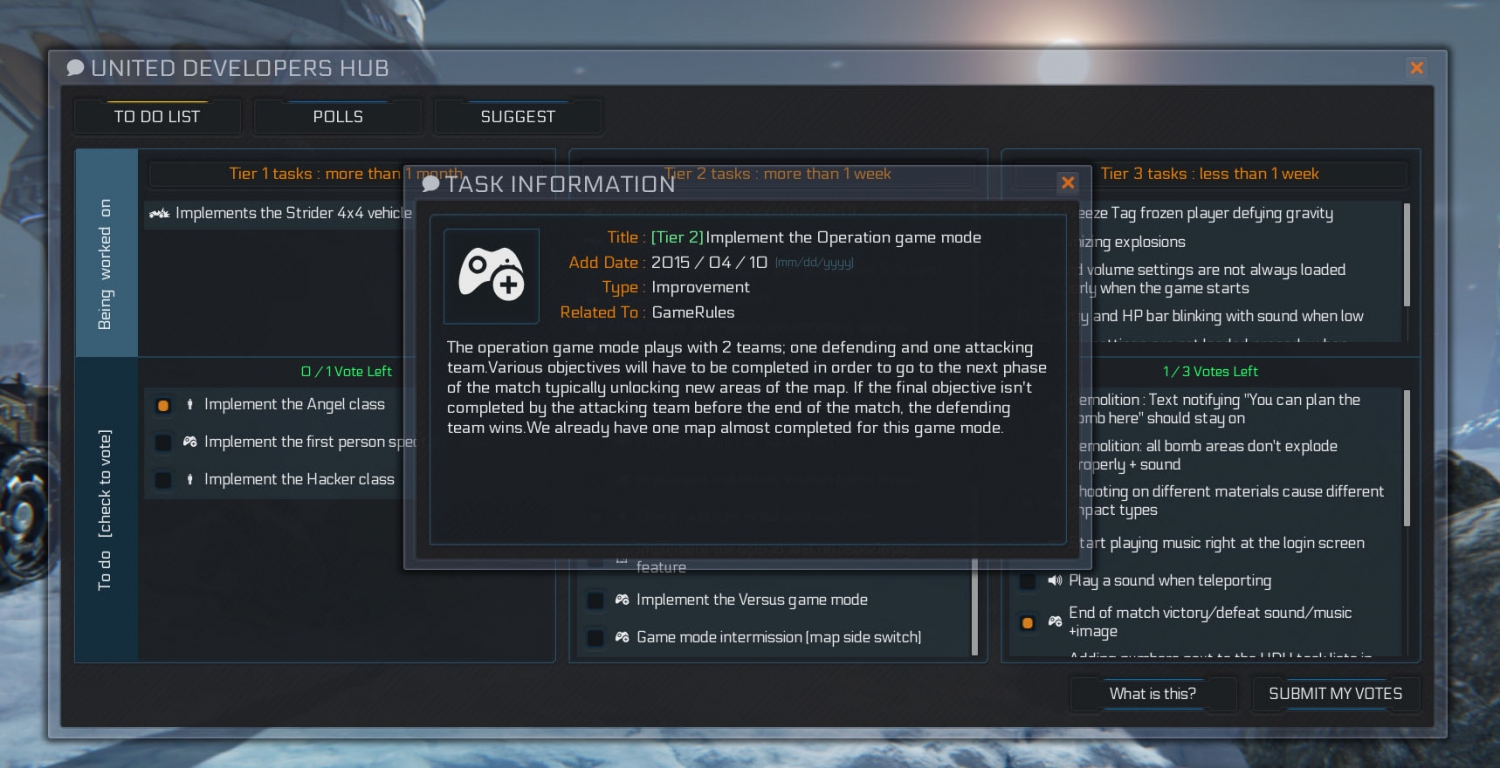 This is why in many ways, where the game really goes is quite unknown even to us. We will follow the main guidelines mentioned above but generally speaking it is the players who will decide what path we take and what we work on first.
We have described how UDH works in details HERE

As you can see, this is a very new way of working with a community and we're very excited to introduce this, it brings us one step closer to the truth when stating "a game by gamers for gamers".

The Steam early access release of Storm United will happen this weekend and will be available for Mac, Linux and Windows users.

So waht modes would the first release version have?And can we play with AI bots for practice?

There are no bots for the release. Games modes are: FreezeTag, Capture The Flag , Demolition, Deathmatch and Team Deathmatch :) 3 others will be added within 2 months: Extermination, Operation, and Versus. We have 2 other games modes in the pipe that will follow.
Our framework is really convenient and powerful so we'll be able to make new ones faster and faster :D

The game is awesome, but i really think that it must have a solo player against AI mode, mostly usefull in case you dont find other players online at a certain moment

I support this idea,'cuz some time you may also need to test new weapon or skills,and AI would be a good way to test.

Don't worry about that empty server problem, this might happen at the end of a multiplayer life but in our case in 6 to 12 months from now, the final release goes f2p so expect full servers at any time of the day. As for the training, we thought we would do a special map for that, with some bots and some mini games :) This said, bots are not out of question and they will come for sure when we'll do the coop campaigns (the same AI can be used for both purposes).

Nice to know the coop mode also in plan,I think I more like coop than PVP cause I don't wanna to be killed by skilled player,I'm a rookie,lol.

I remember seeing this game in it's early development phase. Since then it's grown quite a bit. Glad to see you guys are putting effort into the game.