Outlier has an exciting future coming up. It's not only being voted on in Steam Greenlight, it's also now under a new, even more open, license! These two things are not, in my opinion, opposed to each other. Read on for more!

Note: If you've never heard of Outlier, and you want to see more features, more action, and cooler screenshots, check out the previous news post.

Outlier has an exciting future coming up. It's not only being voted on in Steam Greenlight, it's also now under a new, even more open, license! These two things are not, in my opinion, opposed to each other. Read on for more! 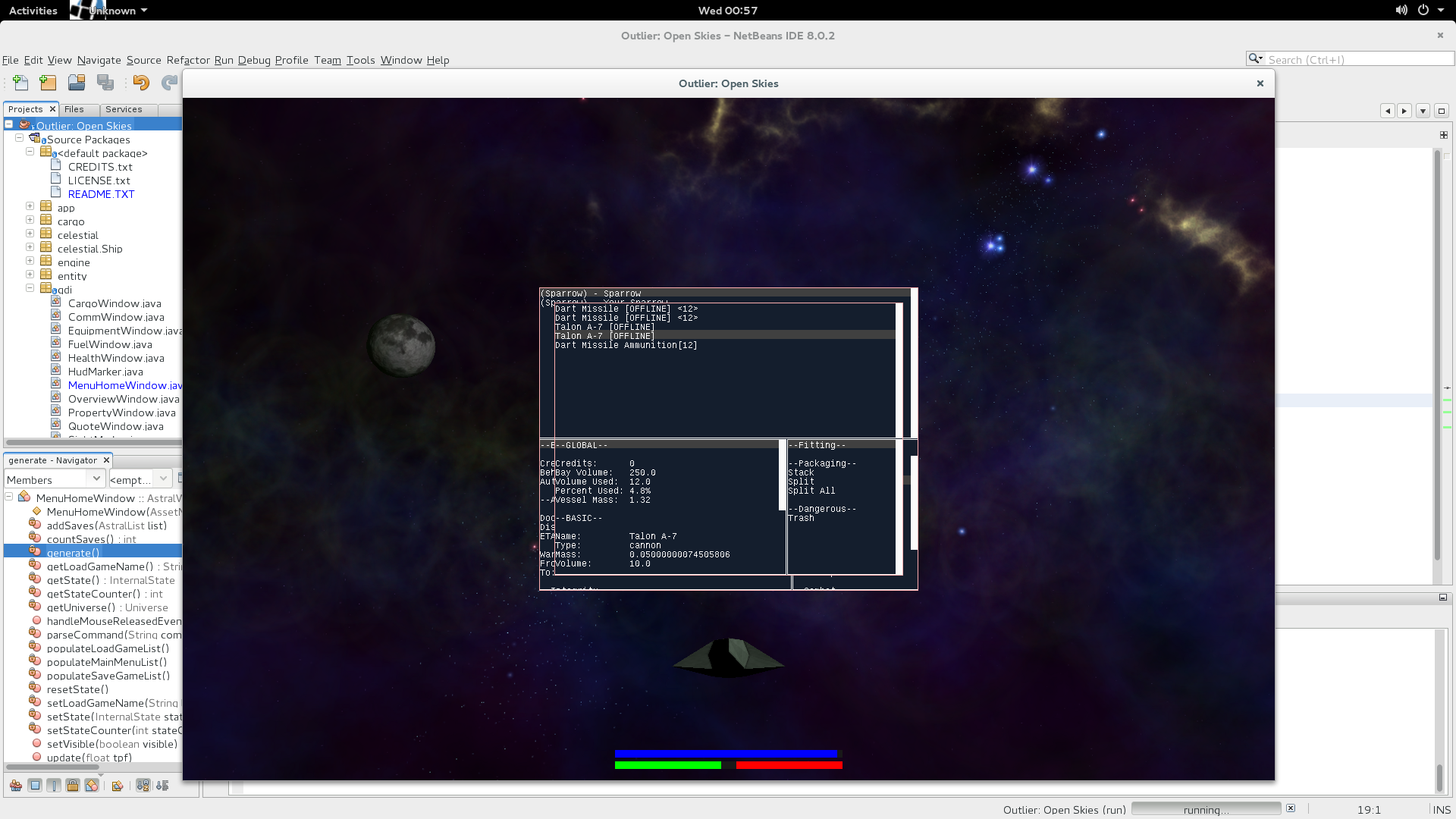 Outlier has always been under a GNU GPL v3 license. This license was chosen because it was a copyleft license which required derivative works to be under the GPL as well. I have a very strong commitment to open source.

I have recently debated changing to the MIT license. This license is extemely permissive, letting you do almost whatever you want. This license is often applied to small plugins, code snippets, etc. I have finally made my choice to apply it to an entire game.

As of now, Outlier: Open Skies is under the MIT license, and my formally private repository on Github is now public. This is a decision I do not make lightly, but I am convinced it's the right one. Outlier may save some other developer tons of time implementing the kinds of hard to do features I have done.

Does this mean development has stopped? Heck no! We've only seen the start of it. But it is my hope that others can use the work done so far, and contribute back, in a way that GPL just didn't allow.

For the curious, the license is below 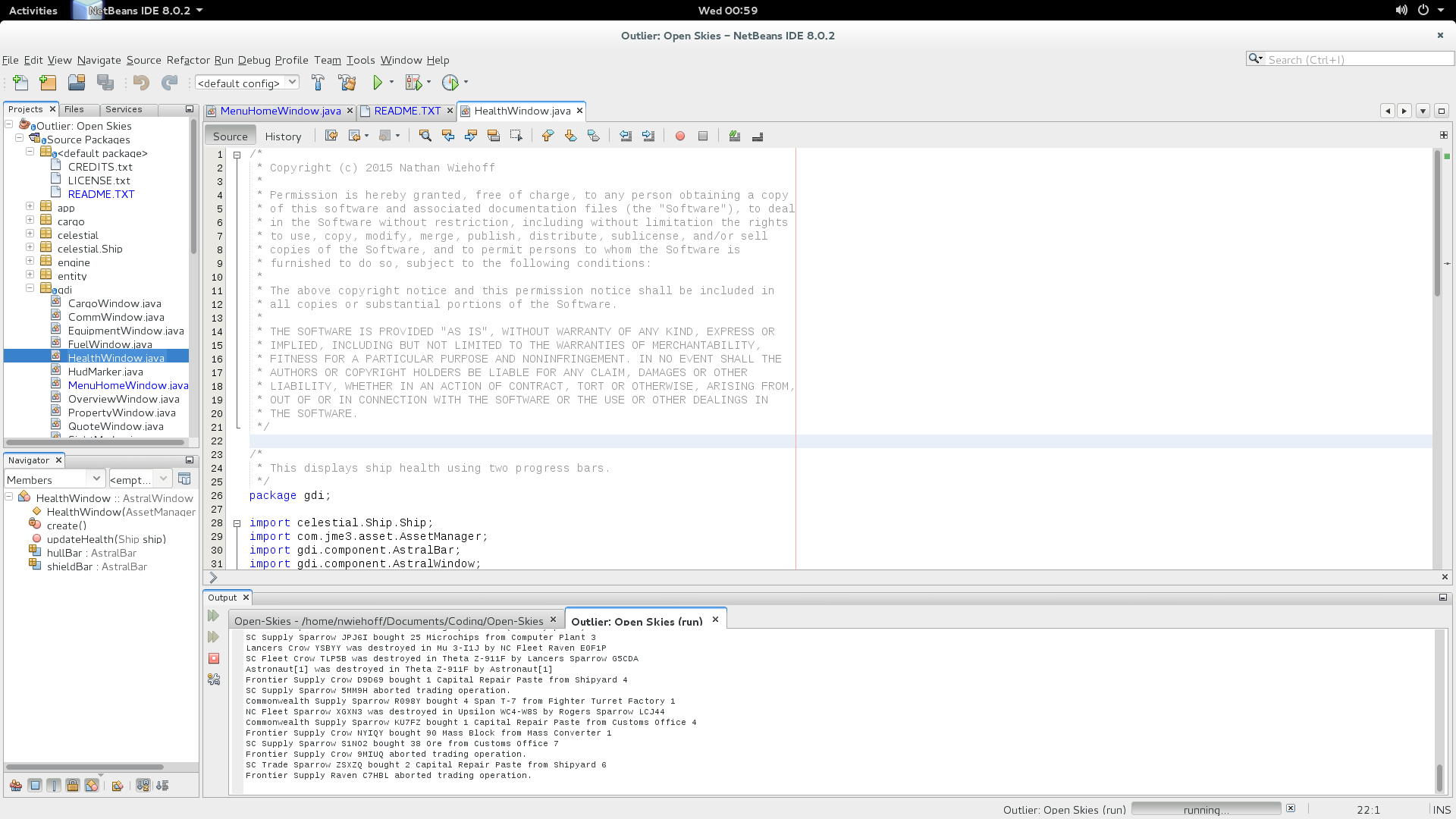 The git repository is now publicly viewable and can be found here.

I really want Outlier to make it onto Steam. I will always keep it open source, as this recent license change should drive home, because I believe that making money and providing free (as in freedom) software are not mutually exclusive goals. 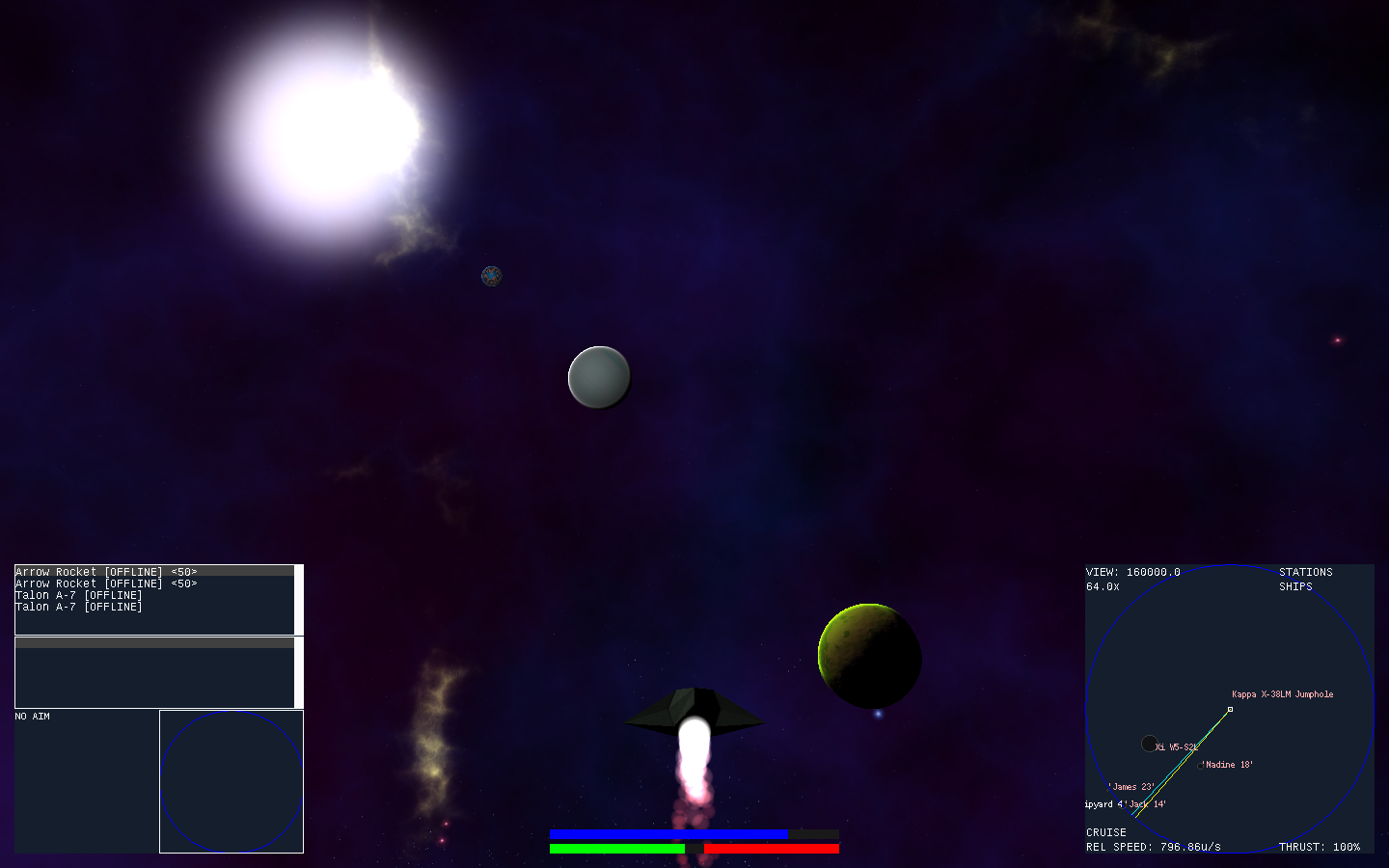 I want to do an early access model similar to what Kerbal Space Program had done. You'd buy in early, get all future updates, and actively participate in the development of new features.

You might be thinking, "Well it's open source I'll just download it from someone else". You can do that, but you aren't really helping out at that point. Sales will accelerate continued development.

By keeping it open source, I hope to make the game extremely flexible for modding (because you can just rewrite chunks of it) and maintainable by others in the event I ever decided I was done working on the project. Too many great old games are dying because their publishers won't release the source code even though they no longer have a significant commercial interest.

So support me on Greenlight and buy my game when it's available on Steam!

Joysticks are finicky creatures. They rarely output nothing when in the neutral position. This causes a small amount of drift as the joystick continues to claim it is ever so slightly off center. Deadzones set a low pass filter where anything below the threshold is ignored, treated as neutral.

Outlier now includes the ability to define dead zones for each axis. See the payload file for details!

Putting this under MIT makes me excited to participate in the future of Outlier (and it's eventual derivatives, since it's MIT licensed). I'm really curious what people can come up with, and hope that some of my work can be reused by others. I know if I'd had this opportunity years ago, I'd have been elated.

For the near future, improvements will be mainly bug fixes and usability tweaks. But after that, and some feedback from the community, I want to begin implementing new features. I especially want to add carriers, which will be capital ships bristling with armament that can carry dozens of fighters and command them!