Astrobase Command has come a long way since 2013. We're considering a crowdfunding campaign to help us accelerate the game's completion. The community's opinion will be important in shaping our future path.

If you followed our blog circa 2013, you’ll remember we used it for many other things besides weekly development updates. We tackled issues about our industry, game design, and running a small game studio. We scaled back on these after a while because they detracted from our progress on Astrobase Command. However, we lost a chance to connect with you on a personal level in the process. We’d like to get back to that.

With that in mind, this week’s post is going to be a little different. Consider this our State of the Studio: 2017 Edition. For those who are new to our corner of the Internet, however, let me catch you up. 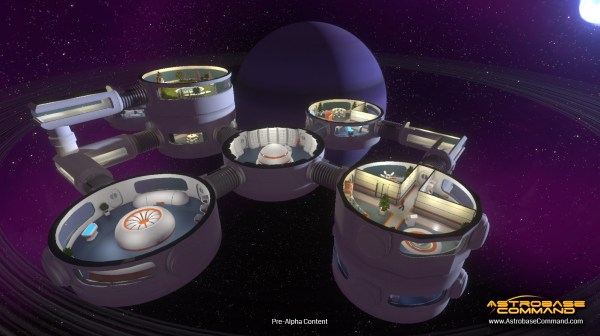 Once Upon a Time

In classic indie fashion, when Dave and I started working together on Astrobase Command in 2013, we had no idea what we were getting ourselves into. He spoke of space stations getting invaded by mystery aliens, crew members coming back from expeditions with spider-bears bursting out of their chests. He spoke of pulling players into their very own episodes of Star Trek. I was in right away.

We had never worked together and were tackling this largely in our spare time. We aimed to put together a Kickstarter campaign with an accompanying gameplay prototype in 3 months, 6 at the most. It would provide a great trial period for the team and if we successfully funded the game, we’d have the upfront capital to confidently blast through development full-time. If it failed to fund, we’d just go our separate ways, richer in experience, until the next opportunity came along.

Oh, what an exciting, naive time! It ended up taking us 11 months to launch our Kickstarter campaign. From losing our artist to having to build our trailer ourselves (hours of Dave screaming at Windows Movie Maker mysteriously wrecking his Windows install), it pushed our campaign launch window into the Holiday period. This will always stay high in our Billboard List of Bad Ideas. But with a reduced team working way outside their comfort zone, we were burnt out and desperate to see our work pay off.

While that campaign was unsuccesful, a few pretty great things happened: we met Max Shields, now the team’s producer/vector artist/designer/enforcer after he backed us on Kickstarter for a whopping 8000$ (still can’t get over that! Love you Max!) and we got greenlit on Steam in a week and a half. Now, those familiar with Greenlight today may not find that particularly impressive. But at the time, it was common for quality games to sit in Greenlight for months without any guarantee of getting through.

I Can’t Ship a Game Without Money? Here, Hold my Beer

With an outpouring of love from the most dedicated Kickstarter backers and this vote of confidence on Greenlight, we found ourselves presented with an unexpected third scenario: figure out a way to bring this game to life without a wad of money upfront. As you may have surmised from reading this post a little more than 3 years later, that was the road we took.

But as the trash fire that was my attempt at modeling assets for the Kickstarter gameplay footage clearly demonstrated, we needed an artist badly. We needed someone who wasn’t afraid of taking a leap of faith, someone who had the experience and skill to define and deliver a unique artistic vision and make this game shine. Luckily, in early 2014, we found Daniel. Since then, he has shattered even our most optimistic expectations for the visuals of the game. I don’t think we could’ve gotten this far without him.

Even though we threw every spare moment at working on the game, it eventually became obvious that this was a much larger project than we initially believed. To fully realize our vision would require the kind of innovation that made our player selves weepy, but also made our project manager selves (admittedly the shyest voice in our heads) want to jump off a cliff. We’d need to be in a position to dedicate ourselves to it full-time.

We gradually made the switch and survived on savings and the belief of our partners. It was then that the game we were playing became obvious: a resource management game where the resources are Money and Time. Making games is expensive and our money didn’t take us very far before we needed more of it. As a result, from that moment and up to today, we have been splitting our time between development on ABC and doing consulting work for other game studios to pay our bills.

This approach has made us self-sufficient enough to go down the rabbit holes of innovation and technically sophisticated art styles. But it has also stretched out our schedule immensely and made us reconsider an alternate approach that many of you recommended to us in the past: a second crowdfunding campaign.

We learned a great deal from the previous campaign and have completed most of a solid alpha version of the game. This means a few important things: we can show a lot more of the game to prospective backers (and it’s a hell of a lot prettier than last time), the funds from the campaign would allow us to wrap up the alpha build much more quickly and potentially give backers early access, and we need a lot less money now we’re most of the way there.

Obviously, we also learned how much effort goes into a solid campaign. That’s why we need to hear from you:

Would your support a second kick at the can? Is there anything you’d like to do to help? Are we overlooking any other options? Share your thoughts on the forums, Facebook, Twitter and share your hearts out if you know anyone that would enjoy running an Astrobase one of these days!