The UI has seen some more changes, with the inclusion of Frigates (and potentially fighters further down the line) it became necessary to make wing management as autonomous as possible. The little buggers are fiddly to click on and while they are in combat the player will need a way to pull them back to the carrier and dock them for replen/repairs with minimal fuss.

So the Indie awards are upon us, it's our first time on the competition and it's quite exciting but what's more exciting is the progress on the game. With the core now resembling a complex state machine many of the tricky bugs associated with inconsistent targeting and movement states are a thing of the past. Launching and docking is now capable from bays located anywhere on the ship (a bit trickier than you might think that one) and fixed weapons are now written in for Frigates. I'm looking forward to adding huge spinal mounted special guns, gonna be cool.

On the subject of weapons the bulk of the effects palette has been delivered so we'll be injecting a variety of new guns over the coming months, we're particularly chuffed with the oscillations of the lightning gun. One thing that I did have a little panic about was sound. Unity comes with a damn fine sound system rolled into the package but we've written our own pooling and delivery system allowing us to prevent overloading by limiting the amount of sounds played and preventing lag spikes while playing them, also allows us to easily loop the sounds of the beam weapons which, simply put, sound amazing.

Adding sounds to this thing is going to open a few eye's I can tell you that, but we're not ready with that yet really - there's one thing worse than having no sounds and that's only having half the sounds! 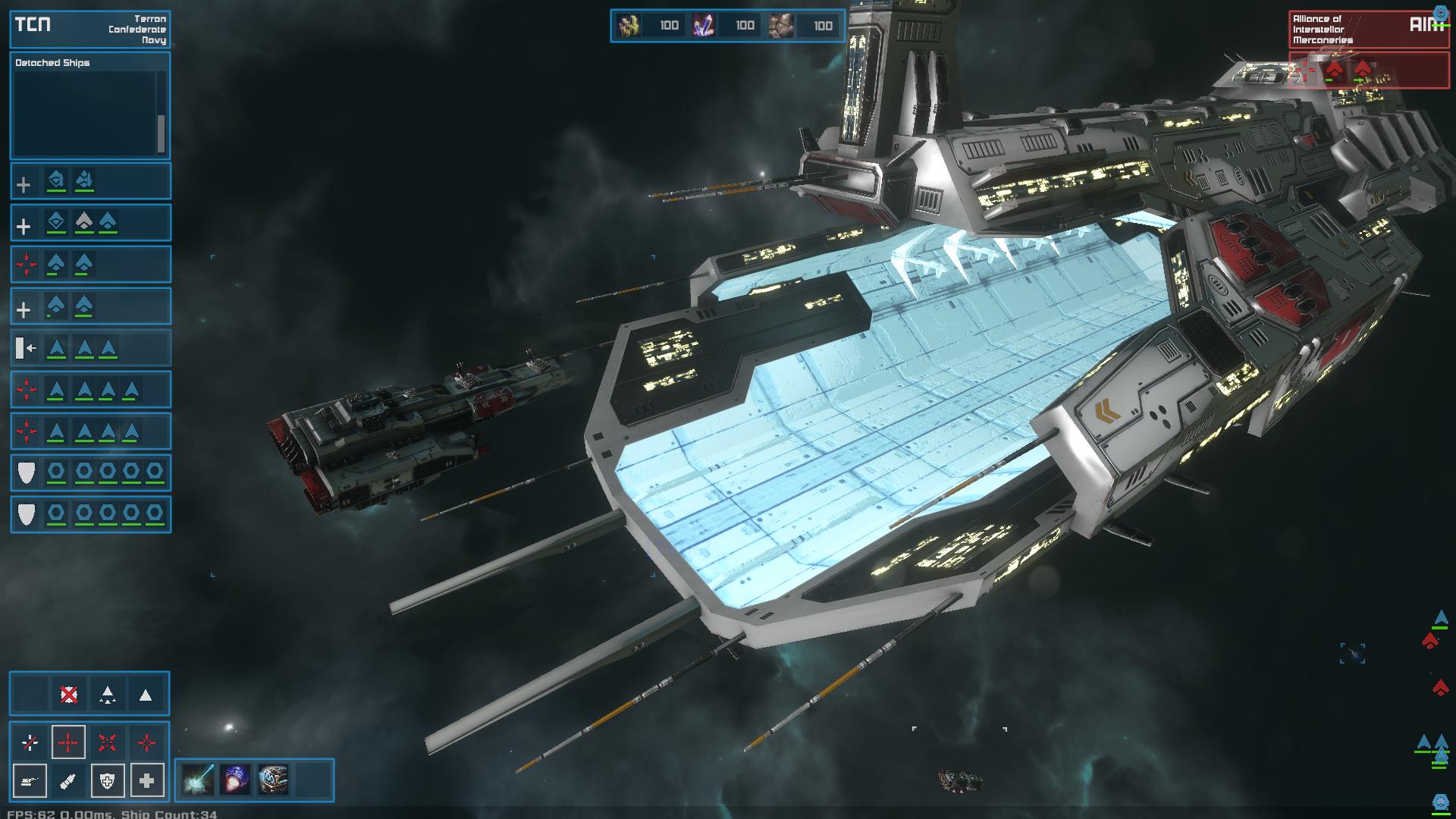 The UI has seen some more changes, with the inclusion of Frigates (and potentially fighters further down the line) it became necessary to make wing management as autonomous as possible. The little buggers are fiddly to click on and while they are in combat the player will need a way to pull them back to the carrier and dock them for replen/repairs with minimal fuss. If you look at the screenshot above you can see status icons next to the wings, by clicking these icons when the ship is in a specific state invokes a specific action. So clicking the status icon when the ship is moving means the ship will break course to pursue a foe, clicking it when a ship is docked will launch it. The aim here is to make it intuitive and reduce the number of actions per minute therefore making the game more enjoyable. 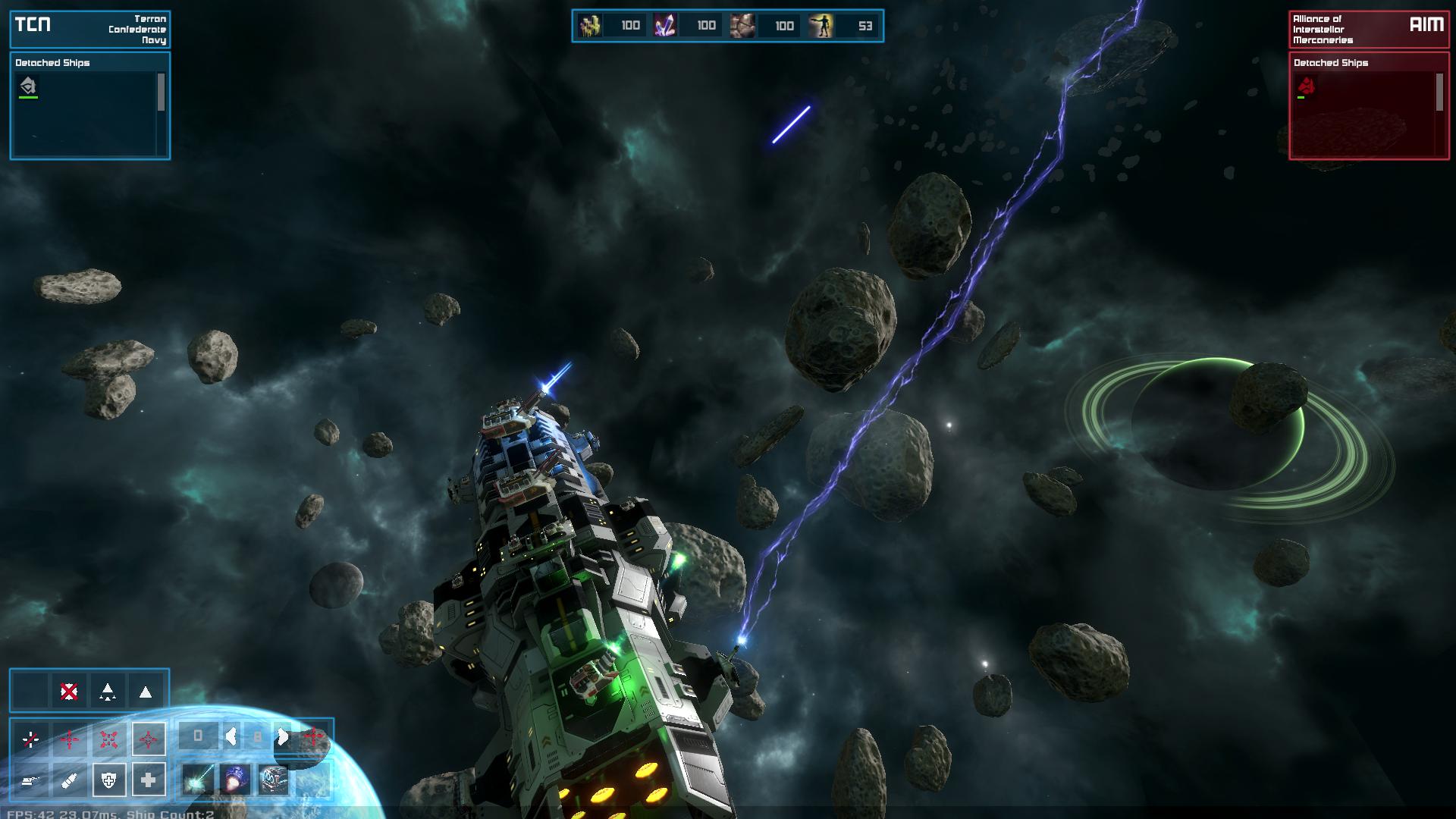 You've probably also noticed the inclusion of some new icons on the screenshots. Well I have to say I had somewhat of a reality check, me and Alex play the prototype and talk about the experience regularly and I surmise that it makes no sense for me to come bounding through the doors with some uber-complex ‘Total War-in-space' type thing. The only people I'll be trying to satisfy with that are the people most likely to pick it apart. So instead I'm going to go with the tried and tested ‘abilities' method, different weapons systems, skills and upgrades will give the ship special abilities which can be activated at the required time. Again this reduces the actions per minute leading to a better experience and I have to say it'll be a LOT easier to code.

Besides, I feel that people will be more forgiving if I increase the complexity down the line, but no-one will forgive me for removing complexity when the rubbish reviews come in - forgetting not that the damage to the games good name will probably already done. So in-game; ‘Energy' will become a conduit to these abilities rather than the planned systems management approach. The game will be juicy enough without the planned energy management features and trust me there will be enough to do as it is!

Coming soon are two new videos, the first is another progress video showing just how far we've come in the last 4-5 months and the second will be showing off Frigates and their various abilities (fixed weapons, mining) our German friend has been churning out ships like a madman so there's plenty to show off there also, along with the changes to the UI, weapons effects, the huge Outpost model maybe... Well I'm rambling anyway - so just watch this not-so Shallow Space because there is more greatness inbound!

Vote for us - help us get noticed and sign up to the newsletter to get notified of the new videos, posts, major developments first and even a chance to take part in the alpha Shallow-space.com

As always, we are honoured by your continued attention.

Ship energy and abilities make more sense like this in the traditional sense of the word sense :P hehehe

Abilities activated by a single click that rely upon the amount of power at hand are classic and proven to work. May I recommend something perhaps in between what you have thought before?

Besides the one time click abilities (like shoot faster for x amount of seconds) you can implement toggle-able stances, which would be "permanent" abilities that would change the balance of a unit, ie. 20% more shields but 30% less speed. Down the road the research tree could modify said abilities and even if you like there could be mutually exclusive ones so you either research a better mechanism of diverting power from engines to energy weapons or shields but not both.

Dunno, there could be many options that should be relatively simple to program, but hard to balance.

Yeah that's pretty much what I meant, but that post was coming on 700 words and most people don't wanna read chapter and verse.

Shouldn't be too hard to balance, they are temporary abilities after all...

E-mail me dude, your continued support and attention has just qualified you for the closed alpha - james.m4rtin at gmail dot com

Seems like excellent progress as always. Love the idea of less fiddly commands for small units and automatic grouping into wings.

Three thoughts:
-‘Total War-in-space' basically the best thing I've heard all week, that I would like to see. ;)

-Energy mechanic: I really like the idea, but since it seems like you're aiming for a more strategy focused (rather than Starcraft-type clickfest) game, what about implementing an energy resource mechanic more similar to the now ancient "Total Annihilation"? Energy is a global resource used for a variety of things including unit abilities which can be switched on and off manually. Special abilities remain active until switched off or you run out of energy. Maybe tie in some sort of added penalty for running out of energy while an ability is still active? ("boost shield" ability for example, could result in weakend shields if still on when energy depleted) Just an idea, but I figure it could contribute to a more strategy-focused feel to the game.

-Modability: If this is something you're keeping in mind, using the above mechanic for energy would probably also allow folks to implement that more complicated ship-by-ship type of energy management scheme should they desire it.

Thank-you for your kind words:

- Glad you like the idea; I've looked into it, pain in the arse to code, but I am going to tie together instances of battle with a grand campaign eventually.

- Sounds like you are describing what i'm intending on doing any ways. I don't like the running out of energy idea, the player could have up 50 ships on-screen it would just be twatish to penalise that sort of thing - it needs to be fun.

- Given the size of the team and the weight of the other requirements, mod-ability is not a priority right now.

As an aside: If grand strategy is your thing google 'Contact Vector' last time I checked he didn't have much of a presence online but he's really skewing the genre with some sort of turn-based-chess style play.

Well, it does all sound very exciting, keep up the good work! ;)

I have heard of Contact Vector, looks interesting I think. Definitely another one to keep an eye on.