LV21 starts anew. Due to recent technical problems, LV21 has been switched fully to the Source Engine. 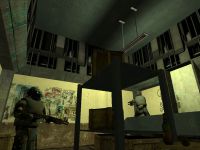 This mod LV21, was previously being built from the ground up on the FPSCreator X10 Engine. After realizing that the Source engine had a higher rendering power, as well as a more simple scripting structure that suits the game and the ideas that I could have only hoped to achieve in FPSC. Anyone who helped with the making of the FPSC X10 version of LV21 is welcome to join up with the team.