These are the starship troopers ship in the mod exaplined fully.... 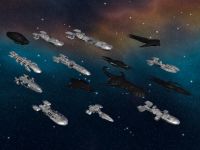 Research Ship - Midway Destroyer Refit (front row right)
I decided on this as the research vessel because its the only human ship that Im not using. So it by default becomes the research vessel.
To explain it and make it ok with all the hard core SST guys out there heres an explination you can swallow... After the Midway was discontinued some were bought and refitted into long range research ships. All weapons were removed in favour of better armor. This stronger armor cuts its speed drematically. Inside is a large number of research labs designed for use in studying everything from planet composition to bug movement....


Tier 1 - Neptune Corvette (front row middle)
The Neptune class is the Federations smallest ship. It is very maneuverable and is often used with Special Forces units in hopping from one hotspot to the next.

Tier 2 - Reaper Destroyer (front row left)
The Reaper Destroyer was one of two designs developed as a new escort ship. The other being the Midway Class. Like the Midway, the Reaper has many improvements to armor, weapons, and engines that allows a fast response to any situation.

The Methuselah class was designed as a cruiser meant to take on the battleship role if necessary. Its main weapons are its 20 missile batteries that, when combined in one salvo can easily maim or cripple its target.

Famed Ship Designer Hiroshi Morioka had a hand in the Alaska Heavy Cruisers development. The unique forked design is theorized to cause hesitation in an Arachnid's offensive nature. Fast and deadly, this heavy cruiser is feared by the bugs.

A battlecruiser that can fight as well as a battleship, yet still cost less and is faster. The Geneva has an impressive array of weapons. From rail guns, to missile batteries and lives up to its nickname as "The Peacemaker".

One of two capital ship classes that can carry large compliments of fighters/bombers into battle. The Saratoga and Athena are designed to deliver the bulk of the combat fighter force to any hot zones.

One of two capital ship classes that can carry large compliments of fighters/bombers into battle. The Saratoga and Athena are designed to deliver the bulk of the combat fighter force to any hot zones.

The new Star Class Battleship is based on the older design of the original but with all the improvements of the latest technology in armor, weapons, and engines. This solid warship is the main heavy found in most fleets.

Tier 12 - Deathshead Battleship (back row far left)
The Deathshead is a Species of Bug used as a Captial Ship. It its very powerful capable of destroying most high level ships on it own.


Well theres all the Large ships details. Now I dont have details on the bugs, so im throwing the floor open to anyone who wants to make something up, like i did for the tier 12 ship. All bug ships need details so go for them....
Anyone who adds to there details gets internal access....

Other than that ill add another update this time next week

and some somthing else

(and also the first time doing that)