Starcraft SOR 4.3 Update So, starting with 4.3, I focused on fixing bugs and instabilities, and I tried to add as much additional elements as possible. 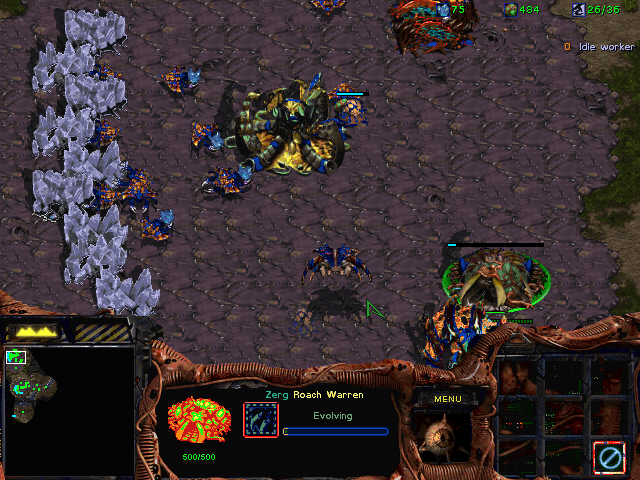 What is SOR MOD?

The background of 'SOR' MOD is between 'Brodwar' and 'Wing ofLiberty'.
So 'Protoss' is the theme color of 'Shakuras'.
Terran has more advanced technology due to UED technology.
Zerg is evolving under the influence of Kerrigan.

Originally, SOR had a story planned. Since version 2.5, the framework has already been completed. Completion of mode was delayed much longer than expected.

'Terran' was about the 'ultimate weapon', Zerg about the awakening of 'ZOAC', and Protoss about the story of 'Rasajaj'. It was the story of 'Three race' in the ruins of 'Xelnaga' found in the old abandoned planet of 'Terran Union.
In 4.0, 'Rasajaj' was deleted, which was a very big mistake. In my 'story', 'Rasajaj' plays an important role. Now 'Story' is possible to rebuild 'Rasajaj'.

Fixed a problem with Starcraft when producing units in Warp Gate.

Fixed a problem with carsh about 'Viper' Portrait'

From last year until now, I was in military service. So I could not patch it smoothly.
So many bugs occurred. It was a situation that I could not find it because of lack of time
or I could not fix.

So my 'MOD' had a lot of instability.

SOR mod has so many units, buildings, and effects. There are a lot of images added beyond the
limit of the number of graphics available within 'StarCraft'. So there was always an instability.

So, starting with 4.3, I focused on fixing bugs and instabilities, and I tried to add as much addi
tional elements as possible.

1. Fixed a bug where 'Zerg Roach' suddenly became uncontrollable while moving.
2. 'Zerg Roach' now has a separate upgrade without sharing upgrades with 'Zergling'. The default movement speed is reduced. Damage has been reduced.
3. 'Queen' moved faster and 'Larva Boost' increased the range of use of the skill.
4. The effect of 'Larva Boost' has been changed.
5. 'Poisonic Swarm' can no longer damage air units. Also, it does not damage team unit.
6. Fixed a bug that 'Decodator' generated 'Broodling' does not attack.
7. 'Hydralisk' movement speed upgrade has been re-created.
8. The portrait of the special unit 'Infested Kerrigan' has changed, and the sound has changed.
9. Fixed bug when 'ZOAC' attacked, 'Starcraft' abruptly terminated
10. 'infested SCV' can not build 'Infested Command Center'.
11. The range of 'Consume' has increased.
12. I increased the burrow delay of 'Lurker' a little. But it is faster than Default.
13. 'Creep Colony' changed to 'Acid Colony', 'Sunken Colony' changed to 'Greater Acid Colony'.
14. The price of 'Spore Colony' is now FREE.
15. Fixed a bug where Ai immediately built Sunken Colony.
16. The price of 'Baneling' is cheap, and the range of splash is wide.
17. The portrait of 'ZAdvisor' has been changed.
18. Fixed infinite box bugs and image bugs that occur when 'Spawner' infects 'Command Center'.
19. 'Roach' can now be Burrowed, which will increase the speed of recovery of Burrows.

<3> Protoss
1. 'Scout' graphic, attack method has been changed.
2. 'Oracle' 'Teleportation Strike' damage has changed the way.
'Large' = 100 'Middle' = 50 'Small' = 25
3. 'Oracle' icon and technology icon changed.
4. Damage of 'Psi Storm' is reduced.
5. Damage of 'Void Archon' and 'Archon' is increased.
6. 'Void Archon' has a new skill called 'Psi Collapse'.
7. The portrait of 'Void Archon' has been changed.
8. New unit 'Tempest' has been added,
9. The speed upgrade of 'Scout' has been removed.
10. The default movement speed of 'Scout' has been increased
11. Added 'Tempest - Phase Reflection' upgrade from 'Fleet Beacon'.
12. 'Leg enhancement' upgrade from 'Citadel of Shakuras' has been added.
12. 'Sentry' damage will be increased.
13. 'Scout' 'Arbiter' The sound of 'Dark_templar' has been changed.
14. 'Dark Templar' random attack damage has been reduced. (100 -> 55)
15. The movement speed of 'Reaver' has increased,
16. 'Scarab Damage Upgrade' has been changed to 2 levels.
17. 'Void Prison' no longer works for 'Decimater' and 'Devour'.
18. Fixed a bug where the portrait of 'Alarak' suddenly changed.
19. Fixed a bug where the portrait of 'Reaver' suddenly changed.

3. Fixed a bug where certain shadows would continue to accumulate on the gas as the gas becomes depleted.
4. Fixed a bug that showed 'Rally Point' of other side as a line.
5. The color of the unit name has changed.
6. Damage Factor (Damage Factor) is displayed in the tooltip.
7. You can check the size of units in the armor tooltip.
8. Added some units of 'Grpwire'.
9. 'Concussive' Damage has changed the damage given to large units