We recently have added thruster effects, new models, and integrated more gameplay into Star Ruler. Work is progressing smoothly and we look forward to submitting to the IGF and IGC as the month draws to a close. Also in this news piece: a look at Star Ruler behind-the-scenes and an early preview of the Terrakin's Ship Set.

Disclaimer: The tech. and integration of design in this section of the article should not be taken as a definitive nod that this will be in the final product. Think it's a good idea/bad idea? Let us know!

Not that there is anything wrong with having lots of special effects and bloom in your game but in most cases they are nothing more than really pretty lights and lighting effects. They don't have any impact on gameplay and don't tend to give the player much useful information. Whenever we integrate new technology into Star Ruler, we tend to ask the question: "What else can we use this for?" We'd like to turn at least some of our pretty lights into pretty handy lights and one such set of pretty lights just so happens to be our (recently added) thruster effects.

Thrusters will function in Star Ruler by gathering data from the ship to determine what length they should be. In effect, this allows thrusters to "boom" when they're first started up and change in size depending on how fast the ship is accelerating or decelerating. That's the pretty part. Now we want to make them functional. How do we accomplish this?

To preface: there's a lot of information in Star Ruler that we expect the player to control in real-time so we try to compact as much data as we can into easy to understand and readily-available information; even when that information is stuff such as running lights and particle effects.

So we may make thrusters one of several visual cues for damage on ships in Star Ruler. If they are fluctuating or snapping on/off you'll know that either your ship has suffered critical damage or it has lost its power source or fuel source. Other things such as the running lights and engines flickering or turning on and off will be used to further allow players to quickly ascertain the status of spacecraft.

Now we've turned a thruster effect into a status effect which tells the player at-a-glance how well off a ship's power/fuel supply is or if its thrusters have been damaged; they can seek the detailed damage report based off the cues the ship is giving them rather than being forced to have the text-and-graphic heavy report up all the time.

We're also considering giving ships a suite of damage models to visibly alter the surface of a spacecraft, perhaps accompanied with special effects. (e.g. a large section of the hull is missing, exposing broken wires and fuel lines; the wires are sparking or arcing and the fuel lines are venting into space.)

The Terrakin were a part of the Terran effort to colonize the galaxy but due to numerous problems with the rest of the fleet the Terrakin were the only survivors able to establish and maintain a colony long enough to become self-sufficient and grow. Unfortunately, to accomplish this, they had to dismantle the ships they arrived on for resources -- leaving only the original Terran engines intact.

Due to these and other factors (such as no longer having access to any original blueprints of Terran design) the Terrakin's ship set have two very distinguishing features. First: there is a sharp contrast of technological design between the (rounded, wholepiece) engines driving the ships and the (square/rectangular, 'thrown together') hulls of the ships themselves. Second: the hulls are roughly put together and tend to become bulky, clumsy, or inefficient the higher in scale the Terrakin engineers construct their ships; often quickly devolving into organic masses and "unfortunate" design decisions.

Here are some of the ships we're working on for the Terrakin: 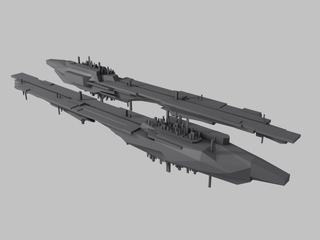 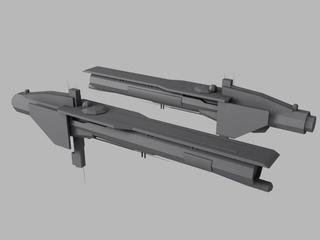 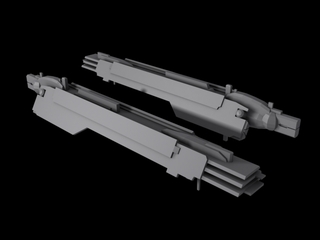 All that is left is for the models to receive their final textures, for those textures to be tied to the models, and for the thruster effects and firing points to be set on those models for these ships to finally be in-game.

Look forward to new updates! This news section will start to become more frequently updated as time wears on and we're in not such a blind rush as we are now to get our submission ready for the Independent Games Festival and Indie Game Challenge.

Questions, Comments, or Suggestions? The box below is just what you're looking for!

All images are "Works In Progress" and are not representative of the final product. All ship models, images, and in-game screenshots used in this news article are the property of Blind Mind Studios and the team members and contracted individuals who created them (listed at our website); they may not be redistributed without permission. To seek permission, contact us through the Blind Mind Studios website; if you are a member of the press, please indicate as such when contacting us!

As you might've noticed at the top of the summary, we are accepting applications via our website for the closed beta (not public). Note that this is a long-term beta position, not a short term. It is likely that if you become a part of the beta team at this juncture that you will retain your beta status right up until launch-day.

If you'd like to apply, navigate to the following address:

I recently acquire Nexus: The jupiter Incident, and I have re-learned to love that strategies games once again and still a lot to be done in that genre. That new game might be a awesome addition to that universe of Sci Fi games.

Thanks! We'll try and keep it updated but the deadline we're under is making it a little tough.

impressive looking game you've got there. Looks a bit like Sword of the Stars or even Sins of a Solar Empire.