It's been two months since launch and we've hit relatively smooth sailing. New features are being added as bugs are struck down and major gameplay additions are popping up in every patch. Exciting additions are on the horizon: race creation, minimaps, and a bunch more we've yet to announce.

Star Ruler is our answer to the common 4X and RTS. Some of it's features include:


Sometimes, less is more. This became evident after we have been receiving lots and lots of reports from players that their game was either repeatedly crashing during gameplay, or not even load at all.

After weeks of searching for the cause for this severe issue and with the help of the SR Devs we had been able to narrow this down to being a memory issue. However, player reports clearly indicated that they did not, in fact, run out of system memory. The main cause for this was running out of video RAM.

So in order to significantly reduce the load on RAM and VRAM we decided to cut down on texture resolution where we could. Additionally, we removed the two recolor shipsets (terrakin green and neumon blue) from the main release. This was especially necessary with the addition of a new, completely original shipset. As a result, the average memory usage should be several hundred MB less without noticeable decrease in visual quality.

All of the content we removed from the main release - loading screens, shipsets, high-resolution textures - are available as separate, optional download in our Galactic Armory Optional Resource Pack (GA-ORP).

The arrival of a new fleet


One of the main features of this release is the addition of a new original shipset. The models were created by Polarstorm, creator of the Race Evolution mod for Star Ruler. Textures and UV-Mapping were done by XTRMNTR2K. 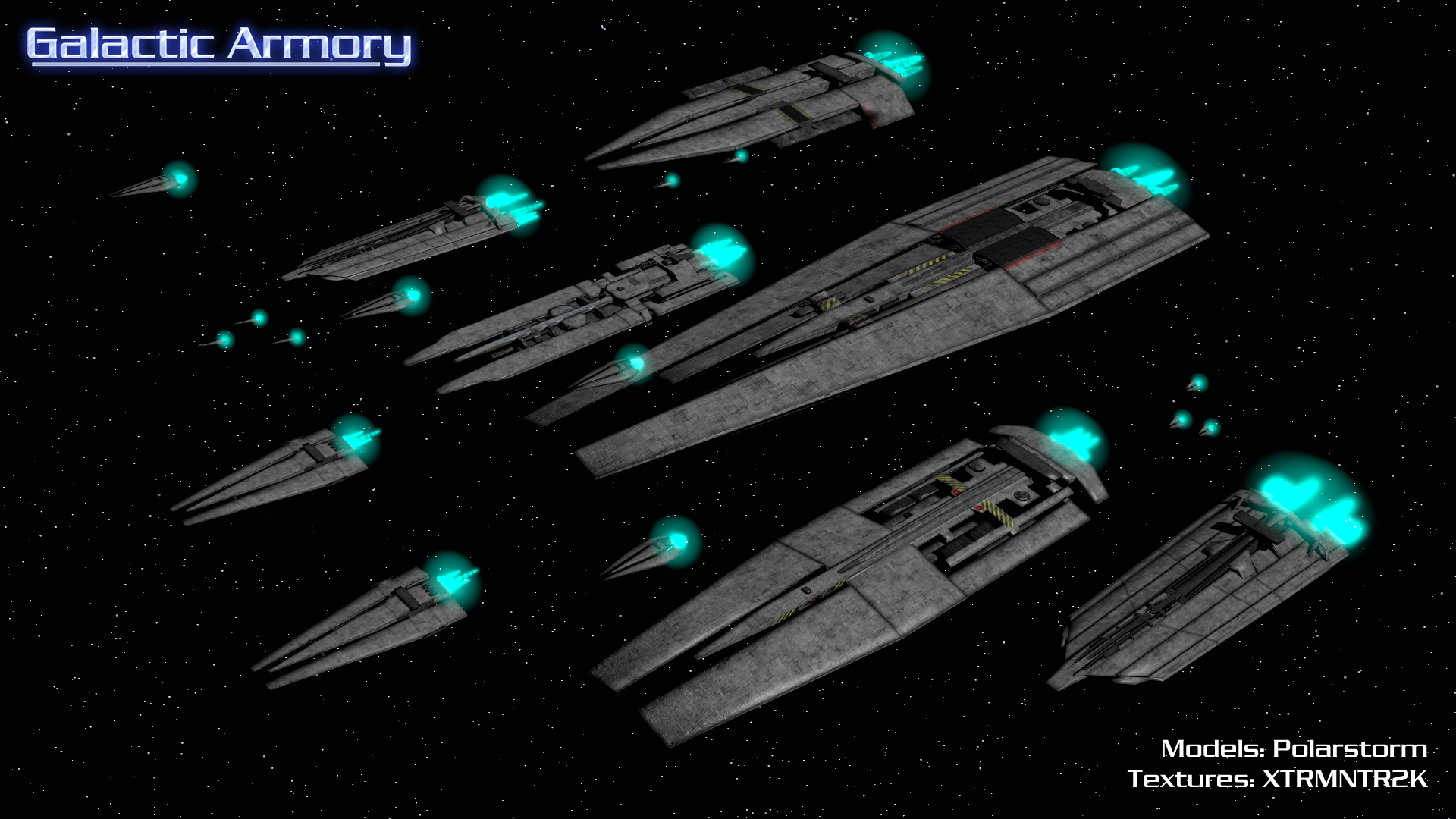 It is important to note that this shipset had originally been created with a texture resolution of 2048x2048 in mind (regular SR textures are 1024x1024). However, the aforementioned memory issues forced us to use 1024x1024 in our main release instead; sadly these don't look as good and crisp as the original textures. If you have a particularly powerful system and lots of VRAM, you can download the Optional Resource Pack and install the high-resolution textures manually. Be warned, however, that these can and will increase memory usage by a huge amount.

tl;dr you can enjoy the high-resolution goodness if you want, but don't come whining about frequent game crashes because you are running out of VRAM.

More bling for your buck


Well, technically you shouldn't be paying any money to get this mod, but we'll get you more bling anyways! We are proud to present a complete redesign of almost all custom (and some vanilla) subsystem art featured in the mod. Here's a preview:

These were created by our talented and hardworking team member cause792, with approximately 1% additional work done by XTRMNTR2K.

Aside from these obvious changes we also enhanced various other graphical aspects of the mod, such as the engine flares. Each shipset in Galactic Armory now features custom animated engine flares, based on graphics provided by Tyrador: 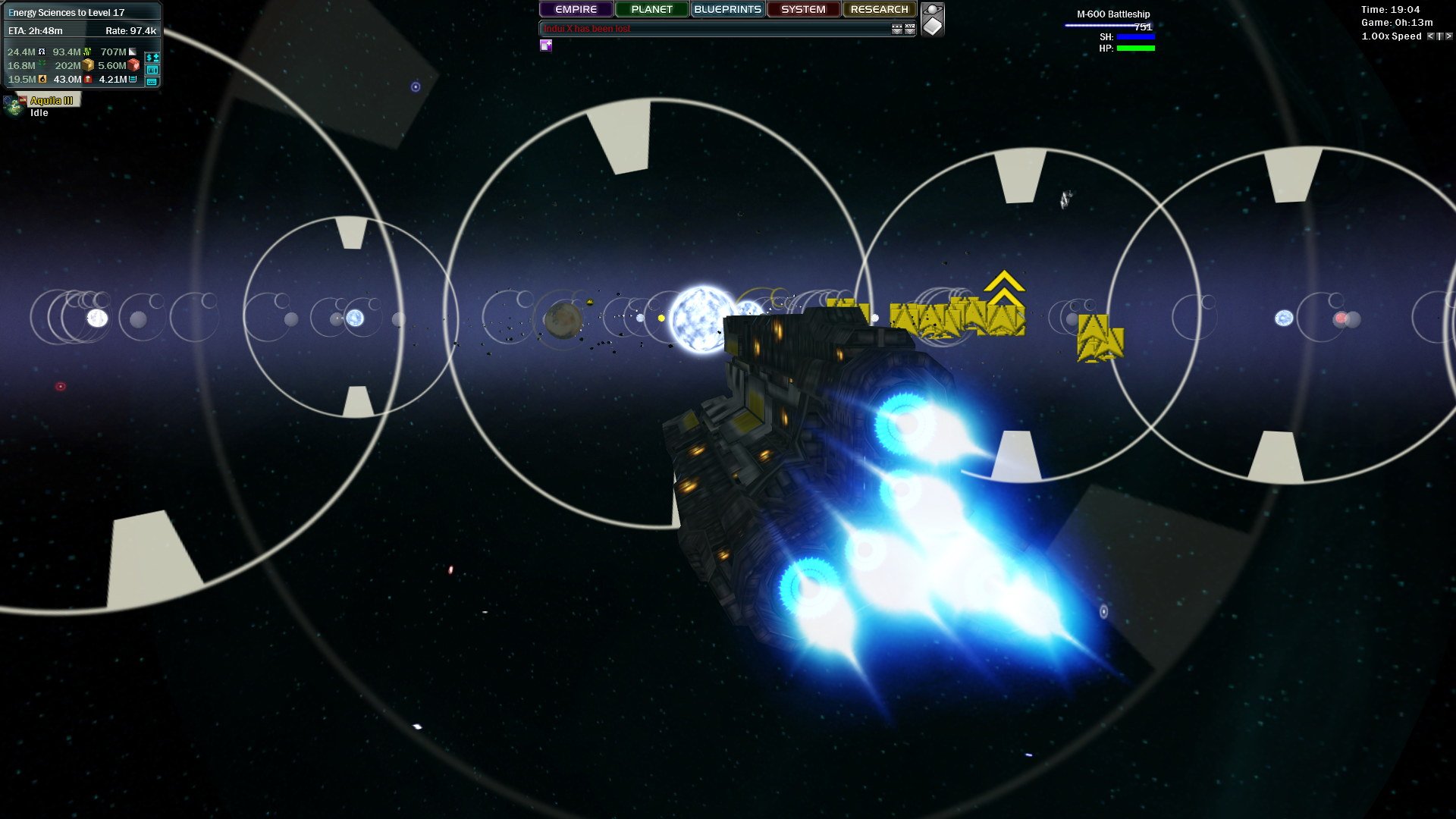 
Aside from bugfixes, new content, graphical enhancements and minor balance adjustments Galactic Armory 1.9.2 also includes a (hopefully) major change to gameplay. It occured to us that Remnant Jump Bridges weren't really often used by players, mostly because of the fact that they only spawned in otherwise empty systems. This meant their impact on gameplay was negligible.

Not anymore! In order to spice things up somewhat, the spawning method used to place Jump Bridges in the galaxy at game start was altered. Jump Bridges no longer spawn in their own systems, but instead have a chance of appearing in every type of system in the galaxy. This should encourage their use and spawn some interesting tactics...

For more information on Jump Bridges, check out the updated ingame Stellarpedia!


This mod wouldn't have come this far without the help, support and, of course, hard work of a lot of people. Since it would be inevitable that I'd forget to mention at least a few people, I'll keep it general (because YOU know who YOU are!):

Final Words, or: The Future of Galactic Armory


After releasing 1.9 and 1.9.1b, we originally intended to focus our efforts towards the development of Galactic Armory 2.0 (gasp!). The need to create yet another release inbetween came up due to the aforementioned memory issues, game content that hadn't been finished by the time 1.9.1b was released as well as some bugs that needed to be fixed.

What does this mean? Well, as long as there are no urgent bugs that we need to adress with a hotfix, this will be the last release of the mod... for a long time.

No, we aren't stopping development of Galactic Armory. Quite on the contrary! Compared to what we have done and achieved so far, our goals for GA 2.0 are quite a bit more ambitious. And ambitious projects need development time. Remember folks, we are doing this in our spare time, without getting paid... Not that we mind. But our main resource isn't money, it's time; and we intent to make the best use of it. So stay tuned for more Galactic Armory news in the coming months!

It has arrived! After eight months, filled with despair and hope (but mostly hard work, really) we are proud to present Galactic Armory 1.9 to the public...

Galactic Armory 1.8.1 has been released! This release contains important bugfixes and ensures full compatibility with the latest version of Star Ruler...

Version 1.8 of Galactic Armory for Star Ruler 1.0.9.0 is finally available! Check out the news post for more information on all new features.

A new version of Galactic Armory has been released! 1.9.4 fixes the issues with governors, remnants and other areas from 1.9.3 and adds the ability for...

This small patch contains fixes for two issues that were still remaining in the latest full release (1.9.2) of the mod. Changelog: [Fixed] checkTrade...

Still best game ever, if i get the money some day i will restart the golbal hosting server some day, best game ever been playing since 2015 will never stop... :)

It is a wonderful game, shame the company was treated badly before.

It's... A good game, I suppose... Not the best... There are a lot of issues and problems. It feels too roughly thrown together. For instance, you literally have no idea when another empire declares war on you unless you check the Diplomacy screen every 5 seconds. And your research goes way too slow, even on Normal difficulty the enemy empires seem to advance with a handicap mode on. I'd give it 6.5/10

Looks good but in some images it looks like there is a lot info showned trought text, and icons are always easily seen, so less text more icons.

The tutorial is sooo long, but good. Maybe it would be better to divide it a bit, I was overwhelmed.

StarDrive seems alot better than this.

I dont think this video really does the game justice. It's a good game.

Will the race-customization be even more in-depth? like, the ability to add your very own race image and icon? :) Just wondering, since i LOVE customization :D and btw, even though i suck at it, this game is AWESOME!

you can add them in via mods, check around the forums for details, cause that's all i have.

Sorry, this is not an actual 10/10, but a 9/10, deduct that from the following review :P Excellent game, though the battles tend to be extremely long (but that is just how these games are, and that's why there is my friend the "speed up" button). I adore customizing, so the ability to blueprint your own ships was what made me buy this game. What i found extremely disappointing though is that the placement of items didn't seem to matter that much. all ships are the same dull model with maybe an extra…