A sneak peak into the details of creating Aero Empire's village center.

Previously, the Aero Empire progress updates have been general, giving you an idea as to what has been happening in the game development process overall. In this article, I, RedOwl (concept artist), will zoom in on the nitty-gritty details of the creation of one unit of the game, the Village Center building, which is currently in the modeling stage.

The Village Center is the smallest of four “city center” units that AE will feature. The others are Town, City, and Capitol. City center units are one of the prominent building units in the game, as they are where mission boards are posted (where the player is able to find out what military missions they can attempt next). Missions are carried out inside the epic 3d scenes you can see in AE screenshots, and are the main focus of the game. However, when you are off-duty, you are able to wander around towns and villages to look at the mission board, converse with NPC’s, and visit the local marketplace to buy or upgrade equipment.

The village center, as it’s name suggests, will be found in the smallest of towns in AE, tiny settlements clinging to mountain outcroppings that you might just miss flying around the world in your huge airship or agile gyro. Villages are romantic and might let you meet interesting NPC’s you wouldn’t have otherwise, but they are technologically limited, and have fewer resources than all other settlements.

Here’s a little insight into how I created the Village Center concept art. 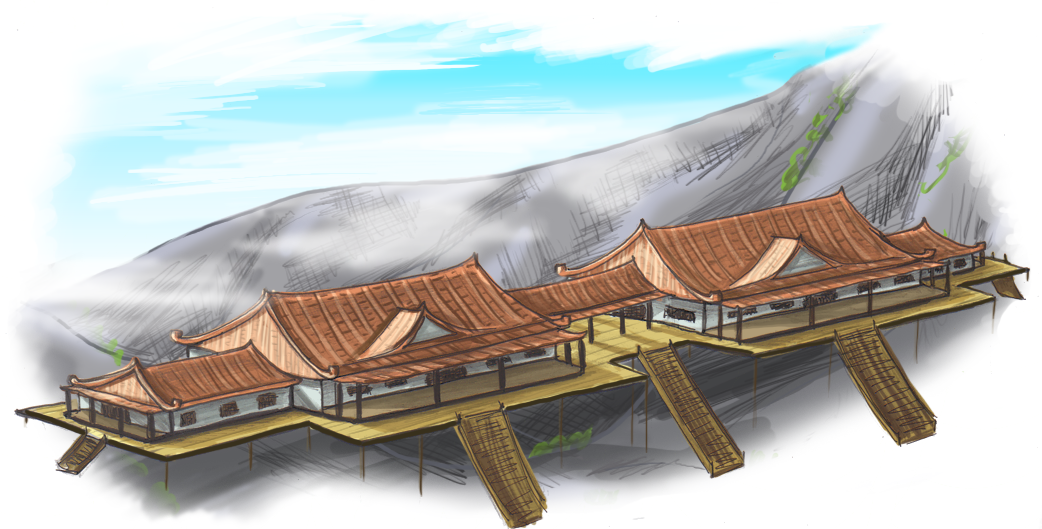 I start off brainstorming some ideas on scrap paper. This is the rough thumbnail I settled on. The sketchy perspective view is just to see what the building might look like. If I like the outcome of this step, I continue on:

Here I have roughly sketched out the basics on better paper (manga drawing paper). I’ve refined the shapes quite a bit from the original thumbnail sketch. I keep the shapes “transparent” at this stage so I can see if everything lines up well or not.

Next I flesh out the details. This is where the AE-specific style really starts to kick in – the scrolls and spikes are a distinct part of the AE world’s aesthetic. A post-and-lintel construction style with slightly curved roofs is used throughout the AE world, although later this traditional construction may be experimented with.

Some pencil shading is added, to get the general idea of where light is coming from. Some windows and doors are also placed, and ramps are added. Most AE buildings are constructed on platforms clinging to the slopes of the mountains, so ramps are usually necessary to move from platform to platform and to reach the mountain slope for farming, etc.

Here I’ve inked in the lines with pen. This gives the image a much cleaner, more organized look. I’ve also refined the pencil shading, making the light direction clearer and the shading smoother. Most of the pen lines were done with a very small tipped pen (.2 mm), but a few lines, such as the edge of the platform, were done with a thicker, brush tipped pen. This is often my final stage.

But sometimes I color a piece to give it more character (and to have a reference for texturing). Here I've scanned the drawing and begun coloring it in photoshop. I erase the white background using background eraser, and start coloring under the lines. I’ve laid down some basic colors, and started giving some attention to lighting/shade.

At this point I’ve filled in more color details, and worked on the shading.

Lastly, I place the building in an atmosphere, and do some minor tweaks.

Next, the concept art is submitted for approval by the team, and then put up for claim by a modeler. The village center was recently claimed by maddmax, who has begun on the basics of the model, as you can see from this in-game screenshot:

In game, the mission board will probably be located in the breezeway of this building. When the player enters this area, they will be taken to a cool 2D backdrop scene which displays all available missions, their level of difficulty, and other stats. You may also be able to see what missions other players have claimed (in the multiplayer expansion).

I hope you’ve enjoyed this sneak peak into the creation process of the Village Center! Be in touch.

Now this! This is how a true concept artist works, and how it should be presented! Great little update there, I love the detail, and this couldn't have been laid-out any better

Incredible job guys, you sure deserve every watcher you have.

This really is pretty neat. I love the art style, and how you've described each step.

I've never used a micron or even a brush tipped pen, but looking at this art style and the sort of effect it has on the design makes me consider finding some.

I'm looking forward to Aero Empire and would love to see more of this art sometime. :D

Thanks very much, Ninjadave! I would definitely recommend the pens, they really make things clearer (and they're much more scanner-friendly than pencil).

I'm glad you're looking forward to the game. So am I! And there are certainly more art updates planned for the future, possibly in the direction of character-art next time. ;)