Post news RSS SPONSORED: Up Your Game with the G810 Mechanical Keyboard

Engineered to deliver world-class precision and performance in today’s games, the Logitech G810 Orion Spectrum is a mechanical keyboard featuring ultra responsive Romer-G switches and stunning, customizable RBG lighting. Trusted by the top eSports players, the G810 shaves milliseconds off your response time, which can make the difference between victory and defeat.

Mechanical keyboards are the smart option for gamers these days. They're responsive, robust and utterly reliable, but you might be put off by the price. It's all too easy to drop hundreds of dollars on a mechanical and end up with one that features off-puttingly loud keys with too much travel for gaming, but there's a simple way to avoid that pitfall.

What you want is Logitech's G810 Orion Spectrum. It's a mechanical keyboard designed from the ground up with gamers in mind, and at a wallet-friendly price. Most importantly it's packed with features that'll give you the competitive edge over anyone playing with an inexpensive plastic OEM keyboard.

Key to its gaming credentials are the mechanical switches themselves. Most mechanicals feature Cherry MX switches. They've become the industry standard and they're ideal for everyday use, but weren’t specifically-designed for gaming, which is why the G810 features Logitech's own Romer-G switches developed to deliver the best gaming performance. 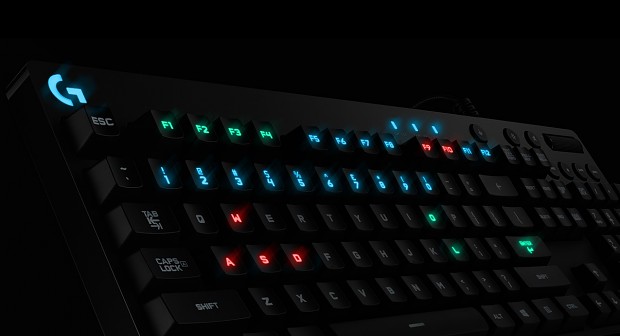 Romer-G-switches actuate at a distance of just 1.5mm, which is around 25 percent shorter than the leading competitor and almost twice as fast as the standard rubber dome switches you'll find with inexpensive bundled keyboards. And when it comes to fast-moving games such as League of Legends or Dota 2, those milliseconds saved can mean the difference between defeat and victory.

There's another benefit to the Romer-G's shorter travel. Combined with a low actuation force of just 45g, you get highly responsive keys that require less effort to press. And while pressing a key might not feel like much effort, it all adds up over the course of a long gaming session. Lower-force keys help minimize gaming fatigue and along with the G810's three-step angle adjustment you can ensure that you play longer and much more comfortably.

Not only does it feature best-in-class performance, the G810's also built to last. Its Romer-G switches are validated up to 70 million keystrokes, so you can be confident that nothing's going to give out in the middle of a vital Overwatch match. It's going to keep on going strong for years.

The G810 looks absolutely amazing, too, thanks to its smart RGB lighting powered by Logitech Gaming Software. You can light up every key in any color you want and even trigger animated effects, but it comes into its own with presets for over 300 games that enable you to only light the keys you'll need for a particular game, so you're never left fumbling in the dark for the reload button.

You can also use Logitech Gaming Software (LGS) to create custom macros on the function keys and unleash game-changing command sequences with a single key press. LGS also disables certain keys that just get in the way when you're gaming. The Windows key, for instance, is switched off by default in the G810's Game Mode.

It’s no wonder the Logitech G810 is the official gear of the ESL, and now's the ideal time to buy. You know you deserve one, and right now you can grab the G810 Orion Spectrum. It's the ideal opportunity to give your gaming skills a boost without blowing your budget.

Hey community, we are just testing out the occasional sponsored post, which we will always mark clearly. Sponsors are important for us to continue to grow so we appreciate their and your continued support.

By all means, the more help/support/sponsored deals you can get, the more beneficial it is to all of us. I can't even imagine how hard it is to sustain such a huge network.

Greatly appreciate your understanding. It takes 12 servers and 5gb/sec to run this site!

to be honest with you, with all that tech you need to run this, i have no clue why you haven't done this sooner.

I very much appreciate that you mark them as "sponsored", and as long as it is gaming related, it's totally fine.

I've got a "old" mechanical KB and I love it. I know some PC gamers who have the newer ones, but I still like the old IBM style KB's. Go figure. :)

To me, mechanical is the only way to go.

Absolutely, though newer ones are better mainly because most of them are MUCH easier to clean.

I've read that you can put the older mechanical ones in the dishwasher. I haven't tried it yet. Never heard anything about newer mechanical ones. I haven't cleaned this one since I bought it 7 years ago. I love going to LAN's and hearing people behind me say "Man, what an old piece of junk." :)

I have a IBM Model M and can't complain about cleaning. But I've heard it's not doing so well with fluids. I've never had such an incident, though.

For me the reason not to buy a modern keyboard is the fear of cheap plastics. Keys become shiny within a year or two and most keypad prints wear off even faster. And we're talking about keyboards $100+. I don't have that problem with the Model M... and it's 36 years old now :D

A piece of art, nuff said

all these fancy mechanical "gaming" keyboards...
I'd like to see one in a split design so I could use it for code too.
Might have to build my own.
For gaming only I got a madcatz strike 7 - short review: pretty lights, decent keyboard. A mechanical version would be nice, but they'd prob. tack on another $100 and it would not be worth it.

at least add some gaming things, like graphic card, gaming mouse, keyboard etc. i appreciated something that relevant with the gaming, and how much the price is best be described, and do not forget with comparing things, with so much gaming hardware and brand in the market, we..i am mean "me".. become getting lost what the best hardware is.not always the expensive is the best one. but mostly and sad ..yes.. they do..lol!!