Spiral Game Studios is currently reporting from the lovely regions of London. We have just finished up at EuroGamer 2010. This consisted with a large variety of networking, contacts, partners and playing all sorts of games. On top of this.. we are also revealing a nice sized announcement for all of you fans of 'ORION: Prelude' - Click to see!

We just finished up at EuroGamer 2010 and had an absolute blast. There were tons of awesome people, tons of awesome accents and tons of awesome games - and do I love me some games. I had the opportunity to try out quite a few of them but if you had to ask what my Game of the Show was it would definitely be the multiplayer component of Assassin's Creed: Brotherhood - that was addicting like you wouldn't believe and it felt extremely natural - so BUY IT!

However - let's move back to our focus and our game - we are here to share with you a whole bunch of information and secrets regarding the development of 'ORION: Prelude'. 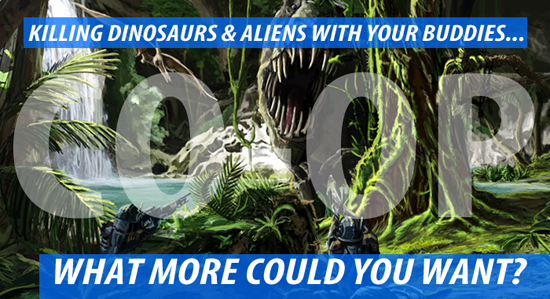 We are happy to announce an extremely exciting game mode for 'ORION: Prelude' - Cooperative mode. While we can't talk TOO many details about this new mode yet - you can rest assured that you will get to play a variety of missions with your buddies and take on hordes of Dinosaurs and waves of Aliens.

As you know, 'ORION: Prelude' is a multiplayer-only title. However, with the addition of this new Co-Op game mode it allows us to tap into the mentality of a structured singleplayer component. We will be designing exclusive maps (missions) for this mode and they will be structured in a way where a story and multiple objectives are outlined.

You will get to see a much more beautiful environment as well as more dinosaur and character interaction. We do want to stress, however, that this is still considered pre-alpha technology and will only get better.

You can expect an "Extended Cut" of this Trailer in the next couple of weeks. Many of the scenes weren't able to make the deadline for EuroGamer - so expect to see more footage of the Dinosaurs and Characters.

We will be gearing up to make the official Teaser Trailer over the next couple of months (alongside the game build) and hope to premier it at GDC 2011 or E3 2011. We will be able to release more details about this as we draw closer.

Our awesome and superhuman music composer, Marcus Zuhr, has created an exclusive music track just for EuroGamer. This track is the Carriers Theme Song (the humans in the game) and is completely bad ass and amazing.

We hope you enjoy all of this and we look forward to hearing your thoughts. Make sure to visit us on our various networks and register on our forums for extended access to otherwise secret things:

That is all we can talk about for now - so until next time!

It's getting awesome. Look forwarding.

I really haven't had a lot of interest in this mod in the past. But this has really sparked my interest. Good work on the environment, looking great. Very Keen for Coop indeed.

Oh my Jeebus, I seriously can't wait for this game.

Glad you all like it!, we have more goodies to show you all in the coming weeks, we are really cranking stuff out-- be prepared for an extended version of the EuroGamer Trailer, more screenshots/concept art, and new character designs/vehicle designs--

yeah, well change the mod icon away from source, now that you are going unreal.....