The Dark Times - in space!

Since a good chunk of Battlefront II is represented by the space modes, it was certainly a priority to add in representation for space battles in "The Dark Times." Still loosely set in the time between Episodes III and IV, "The Dark Times" space uses a few spacecraft that will be familiar if slightly less-advanced than the normal Galactic Civil War spacecraft.

As you can see in the following video:

"Dark Times" space includes new twists on old spacecraft as well as a few new craft in and of themselves. New craft you'll see will include the BTL-B Y-Wing (early Y-Wing model), the Z-95 Headhunter, the TIE Vanguard, the RM-09 Alliance shuttle, and the Imperial "Sentinel-class" shuttle.

Of course the above is only indicative of the standard "Space Assault" mode. An additional space mode is included in "The Dark Times" - Team Dogfight. Team Dogfight is team deathmatch - in space. Team Dogfight removes the shuttle classes and adds new "hero" spacecraft for each team. Just like on land maps, you can unlock a hero once you perform well enough, but once you unlock that hero, he (and only he) will have access to his personal spacecraft - a specialized, high-powered vehicle capable of taking on much more than a standard fighter. 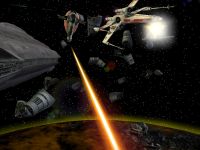 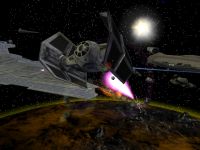 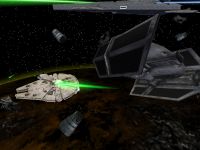 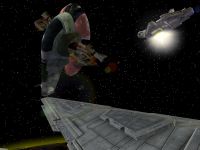 There are four different space heroes (distinct from the normal land-based heroes) - Boba Fett and Darth Vader for the Empire, and Biggs Darklighter and Han Solo for the Alliance. There are also four different new space maps only for "The Dark Times" - Space Corellia, Space Dantooine, Space Nar Shaddaa, and Space Raxus Prime (pictured above).

All the space heroes, like their land counterparts, are able to be controlled by the AI - which means you'll get to dogfight with these heroes not just online, but in singleplayer as well.

Really like the idea of Space Heros! Nice work!