What a month it has been. For those of you who have been keeping up with TFH for a while, you know that I've had a long string of computer problems for a good year now - or rather, I should say, computer problem, as it's been one component overheating and basically ruining the party for everybody else. After having replaced almost every component in the system, one at a time, the problem seems to still be persisting - meaning it's either the hard drive or the processor. Since the hard drive is still under warranty, I'll be replacing that, next. On top of that, severe plumbing problems. But, while I've been beating the springtime heat and trying to get rid of the smell of old, wet carpet, I managed to work on the game! Fancy that.

For starters, I've been re-writing the partner AI code. I really wanted to include Knuckles in the Dry Savannah demo, but in actuality, his movement code was pretty sloppy and it just wasn't up to standard. The new code for partner stuff is hopefully much more efficient and polished. It's not done yet, of course, but I can always roll back to the old stuff if I'm for some reason not happy with the way the new code is turning out. No real new features in this area, just... clean-up, really.

I also did a bunch of other little tweaks to things that are so small that aren't worth mentioning, so I'll just skip right to the big one: Amy's redesigned shop menu. Menu systems are usually the bane of my existence - especially highly modifables ones. Amy's old shop menu needed to be dynamic, and have a wide range of items to purchase. It was cluttered and took up the entire screen: 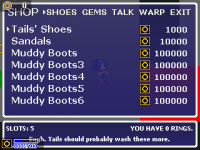 It was a bear to work with and I never really did finish writing it because I figured I needed to get Sonic's equip menu done first. When I made the decision to simplify the game a bit and throw out the whole overcomplicated equip system, I basically tore out all the code for both Amy's shop and Sonic's equip menu and started over from scratch on those elements. I am happy to announce that Amy's new shop menu is complete and looking mighty fine if I do say so myself:


Small, elegant, and fitting with the rest of the menus the game presents. It shows just as much information as the old shop menu did in less than half the space. Prices on items may seem steep, but that's intentional - to start with, I don't want to devalue finding items in levels themselves; it encourages players to venture out in to levels to try and find items hidden in secret locations rather than spend rings to buy them. Plus, if you're good at the game, having a lot of rings is not really a problem - some would consider the Dry Savannah demo a "small" level, and it had around 700 rings in it if you went around and collected them all.

If you're unclear on the concept of the ring bank, basically, it's like Sonic Adventure DX on the Gamecube; when you finish a level, your leftover rings are added to a "bank" of rings that can never be lost. When buying items from the store, it factors in both the number of rings you currently have with you and the number of rings you have in your ring bank and subtracts from the bank first (Thinking about it as I type this post out, it might be wise to give Amy a "deposit" function, actually, that transfers some of your current rings to your ring bank from her shop menu.)

That'll just about do it for TFH's April Update. Considering the whole "Hard drive Warranty Repair" situation, I'll probably be out of comission for a week (if not longer), so next month's update might be a little strained - depending on how lazy I feel, of course. ;) What with producing a massive volume of content for the site I work for (in the form of video reviews, etc.), I think I have an excuse!

Next month marks one solid year of monthly updates on Moddb! Can you believe it's really been a year? Assuming Seagate's Repair Center doesn't screw something up, I'll see you guys in 30.

Awesome. It is too bad about sega and their downfall. Nice use of the sonic CD soundtrack. :)

Looks really good! and @w1ngzer0 just asking what is your avatar from i think i seen it somewhere?