The frick have I been?! Finally an update at-last, joy?

Well, I feel pretty bad. I mean I've practically abandon this project during the release stage due to that evil thing (Real life). I've left most of the tedious work to Peter (Arkage) and Greg (Xalener). They've put in an extra 50% effort to compensate for my absence, every year, we put in extra effort during the ModDB (and also now IndieDB) Mod of the year awards. However due to the massive step up in our education (Doing my A levels now, Peter's doing a full time Game course and Gregs doing something american.) we just haven't had the opportunity to work as much as we'd like. For that: I'm sorry.

Now we have that out the way, lets cheer things up.

It may have not hit ModDB yet, but Solitude has actually been released, and since two patches too! Why hasn't it been released on ModDB yet? Simple. We wanted to make it a better experience for the wider audience; in this case, ModDB. Our little community has been playing it for about a month now, and it's been given a better response then I could've hoped for. A few more patches, and you guys here should have neat little download!
Here's what the current alpha looks like! 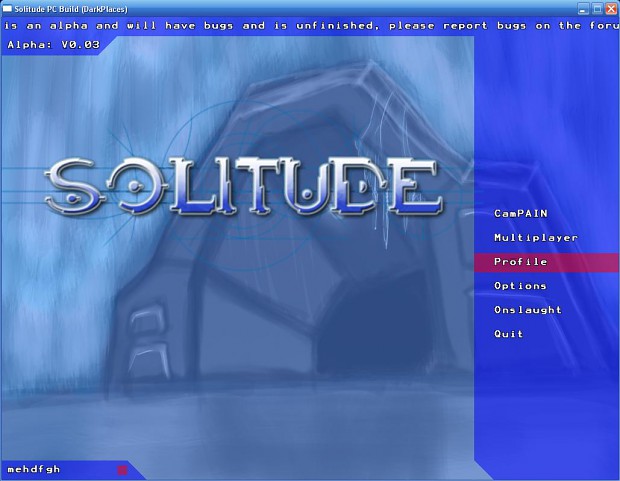 We've had the domain for a while, we've had the website ready for a while. It's just been a time issue, however hopefully www.figames.net will be up and running in no time!

I guess I should finish this up with a plea for votes, but late bit ehh. Mod of the Year and Indie Game of the year.

Where did the past year go? Feels like yesterday me and Peter we're staring at that bloody scoreboard and attempting to spam the hell out of this lovely site.

We might have had delays as bad as valve, teamwork as great as this, but I've had a hell of a year working on Solitude, and I can safely say Peter and Greg have too. It'd be a massive achievement to be in the top 100 list for the third year running. Very unlikely, but still worth a shot right?!

Stay tuned for a Moddb release sometime very soon!
If you like what you see, we encourage you to Track the Game to be be updated on future media, the more watchers, the more pressure I've got to make consistent updates!

Thanks guys, See ya!

Can't wait to play its looking awesome! May as well sign up now for your forum before i forget for the tenth time. Can't wait until the download comes onto MODDB :)

You just reminded me to vote for this. :D

I've been following this mod for a while and I just wanna know, if Home brewing ur PSP is worth it? I've thought about brewing my PSP in the past but never have cuz the idea of third party **** on my psp sounds suspicious and unsafe.

If someone could perhaps enlighten me on the Pros and Cons of Home brewing (besides voiding warranty) tid be appreciated.

btw keep up the news.

I think we should give another mod an opportunity.

That PAIN in camPAIN sticks out like a sore thumb.

Well seeing as the "pain" part is in caps I thought it would bring emphisis to it and people would realise it was a joke (as in its spelt wrong on purpose, in case you didnt realise that).

It seems that shot miles over you head then.

I can't wait, I'm signing up on your forums. I've been watching this for a LONG time. Looks great ;)

well i see you developers are using computers to run this game.... isn't it suppose to be on psp too? at lease a video? i'm losing a bit of interest in this project becose i couldn't see the game working on psp yet -.-

Lets hope they focus more on the psp in the future dude ;)

Now it's been two years... Yeah, this game's dead.

its not dead, its already out, it will be HERE ON MODDB atleast sometime....

i wish solitude reborn was as good as this...