Over the years after Oblivions release a lot of old concept art and information has been leaked which showed that certain weapons, armors, cities, creatures, factions and locations could have been much more unique.
The Skyblivion team has some very talented landscapers and concept artists who were willing to put in some extra work to realize some of Oblivions original visions in the hope of providing our fans with a more unique, interesting and beautiful rendition of Cyrodiil while also trying to minimize our work load as this is pretty big as it is.

So what exactly can you expect to see changed in Skyblivion? I was going to once again write an extensive report but pictures speak louder than words so lets save everyone some time shall we? 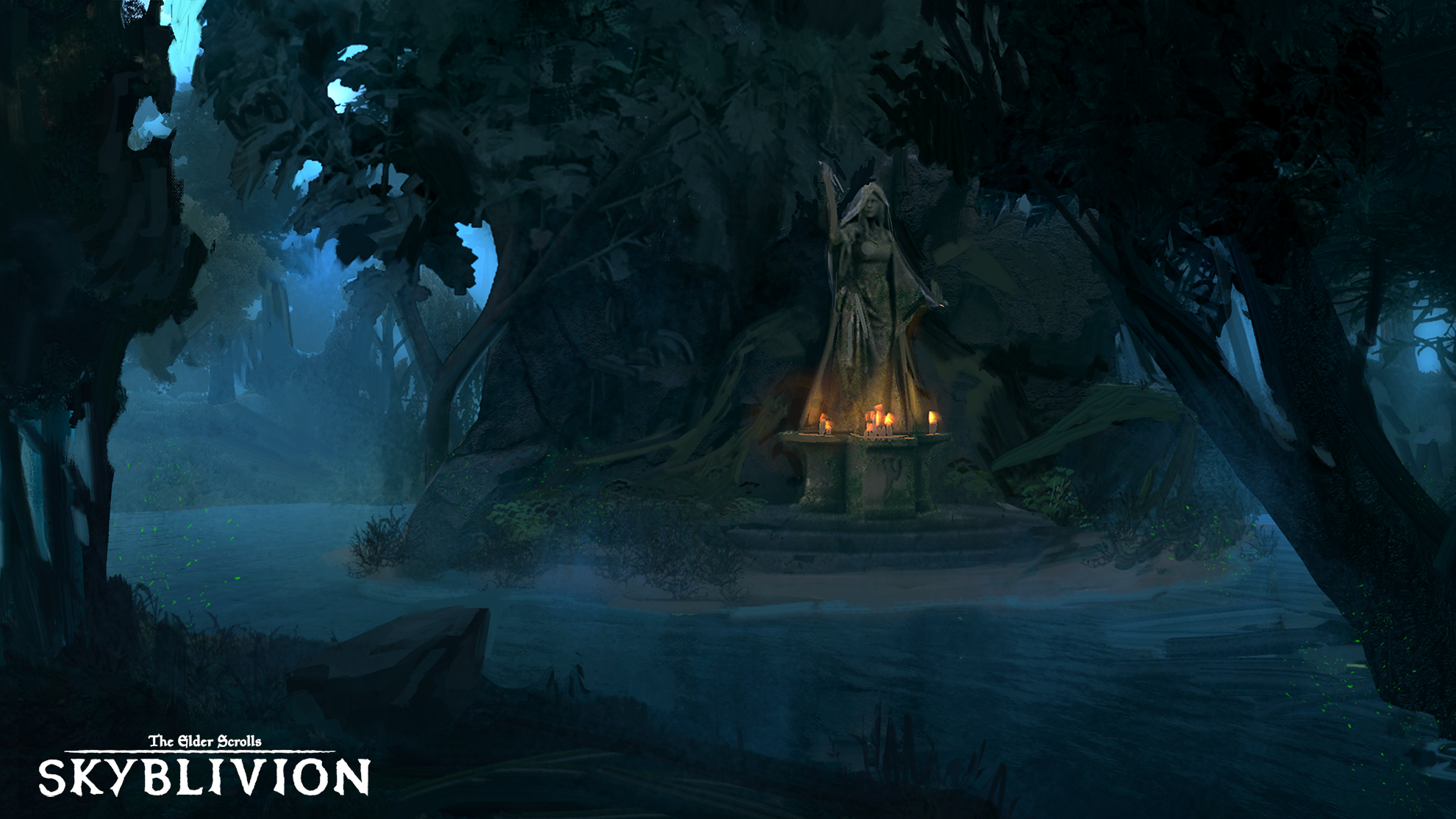 Yeah so you can probably tell why we really try to make these shrines more unique. 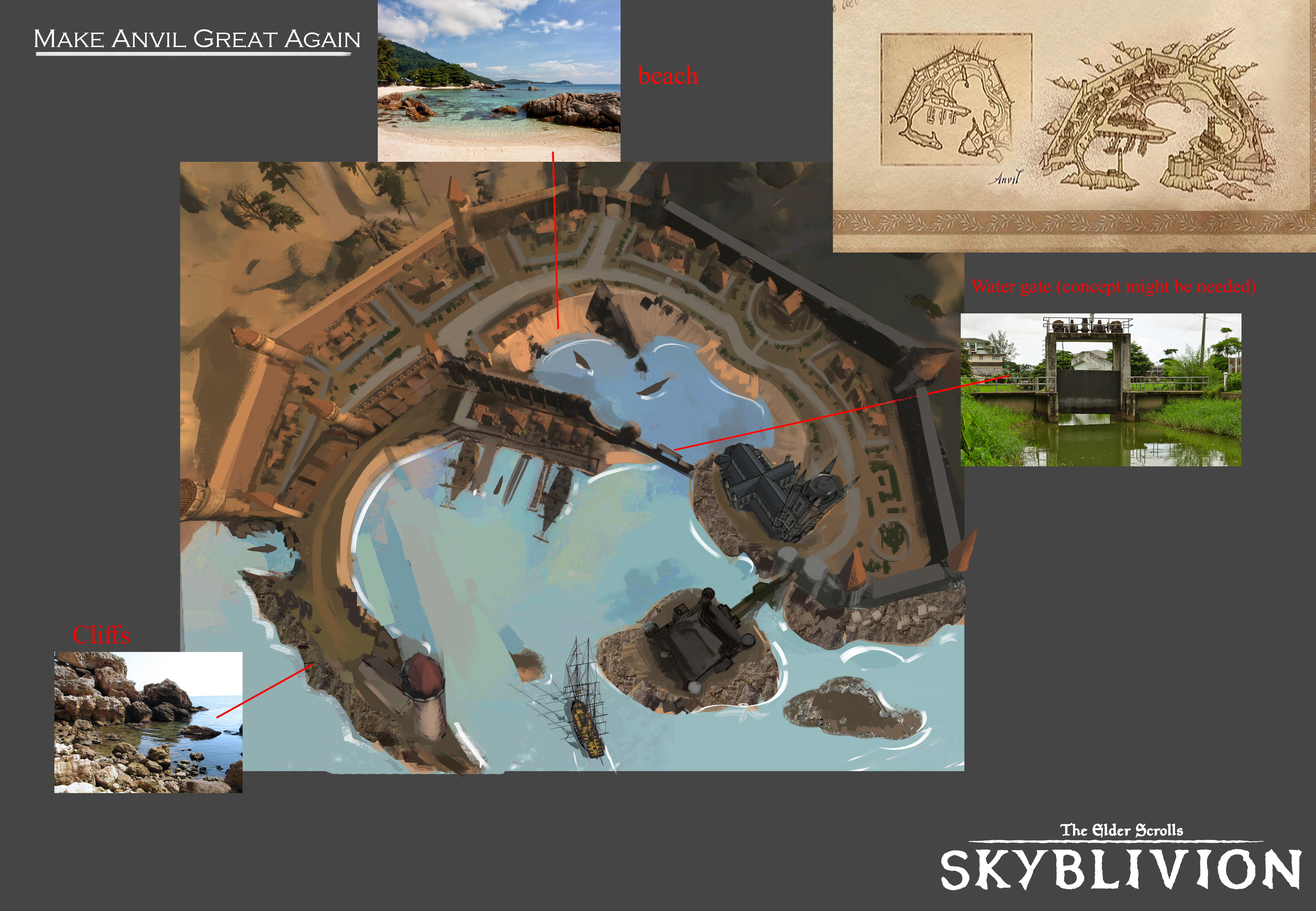 For starters anvil was supposed to be a very cool and obvious harbor themed city with walls located on sandstone cliffs and the big port which would harbor all the trade ships. On the top right is the original concept for Oblivion and in the middle is our vision. 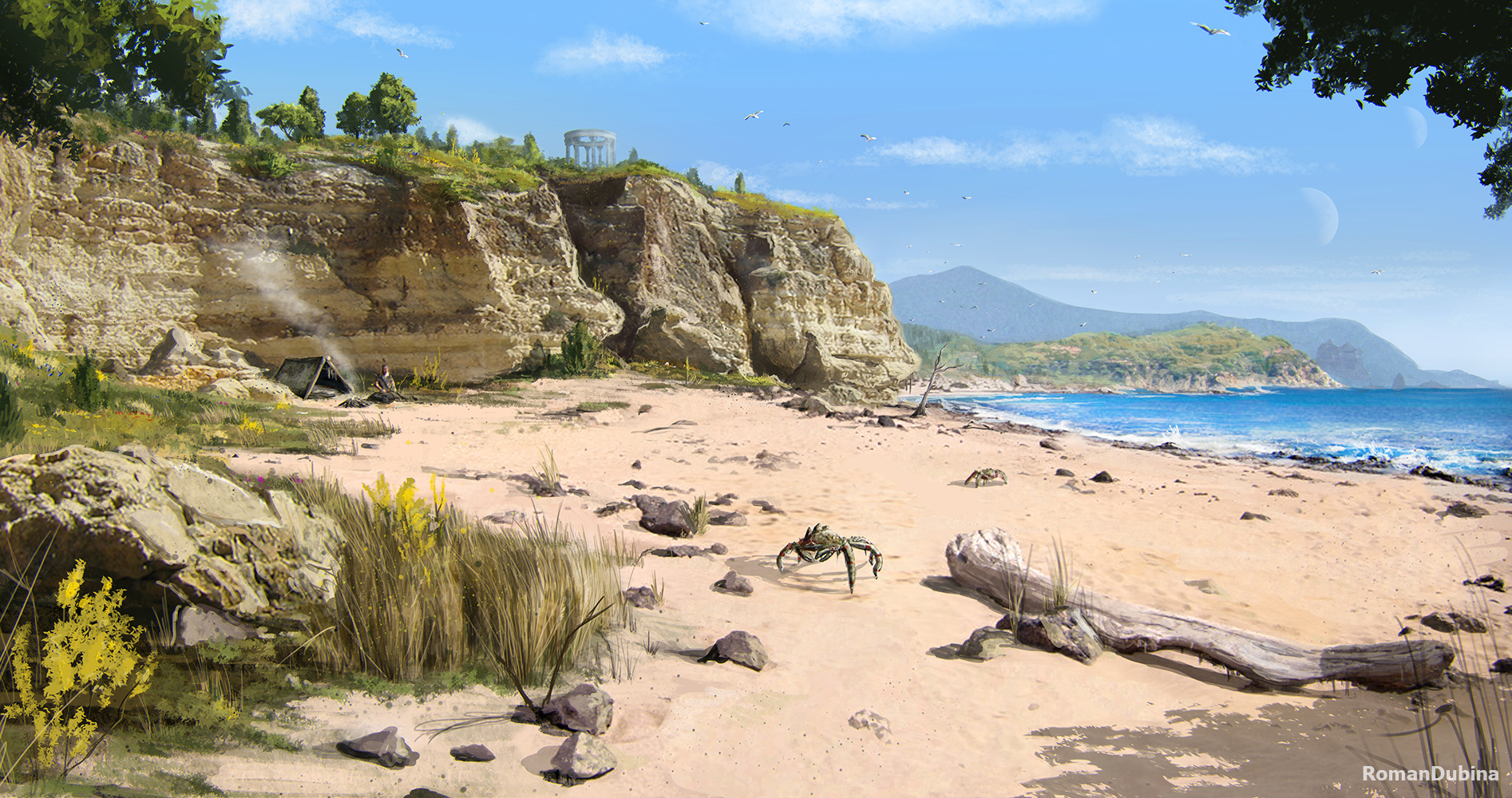 The beaches of the Gold Coast are another great example of an area that we are trying to make more unique. Near the border with Hammerfell we will have sandstone cliffs protecting the land from the sea. Behind this instead of Oblivions endless hills the landscape will be much more calm and flat as one would expect near the sea. 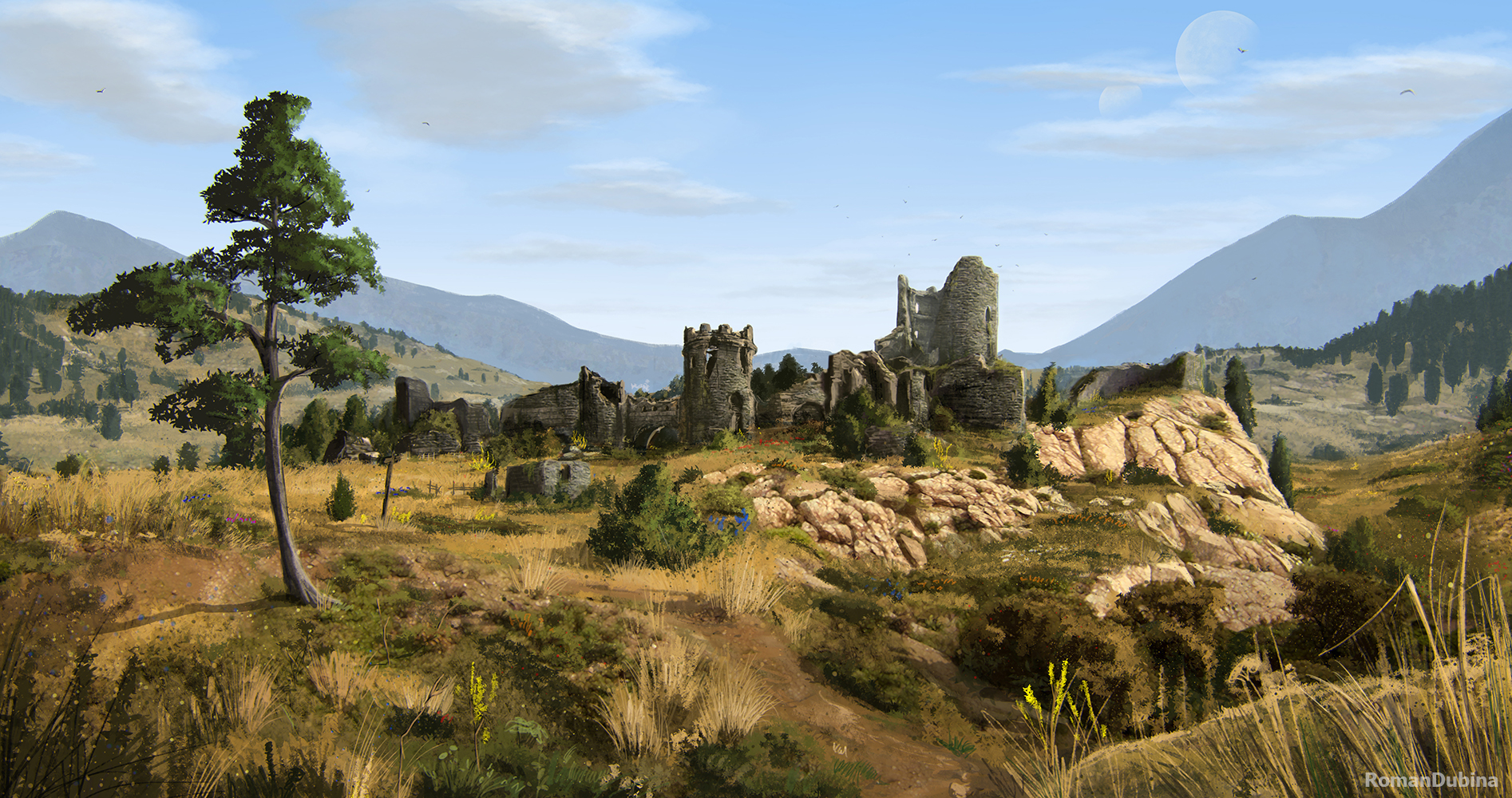 The city of Sutch was cut from Oblivion and re-written lore says that there once stood a great city but nothing remains but some ruins. Yet in Oblivion all you could find is a single tower.

The Swamp Of Blackwood 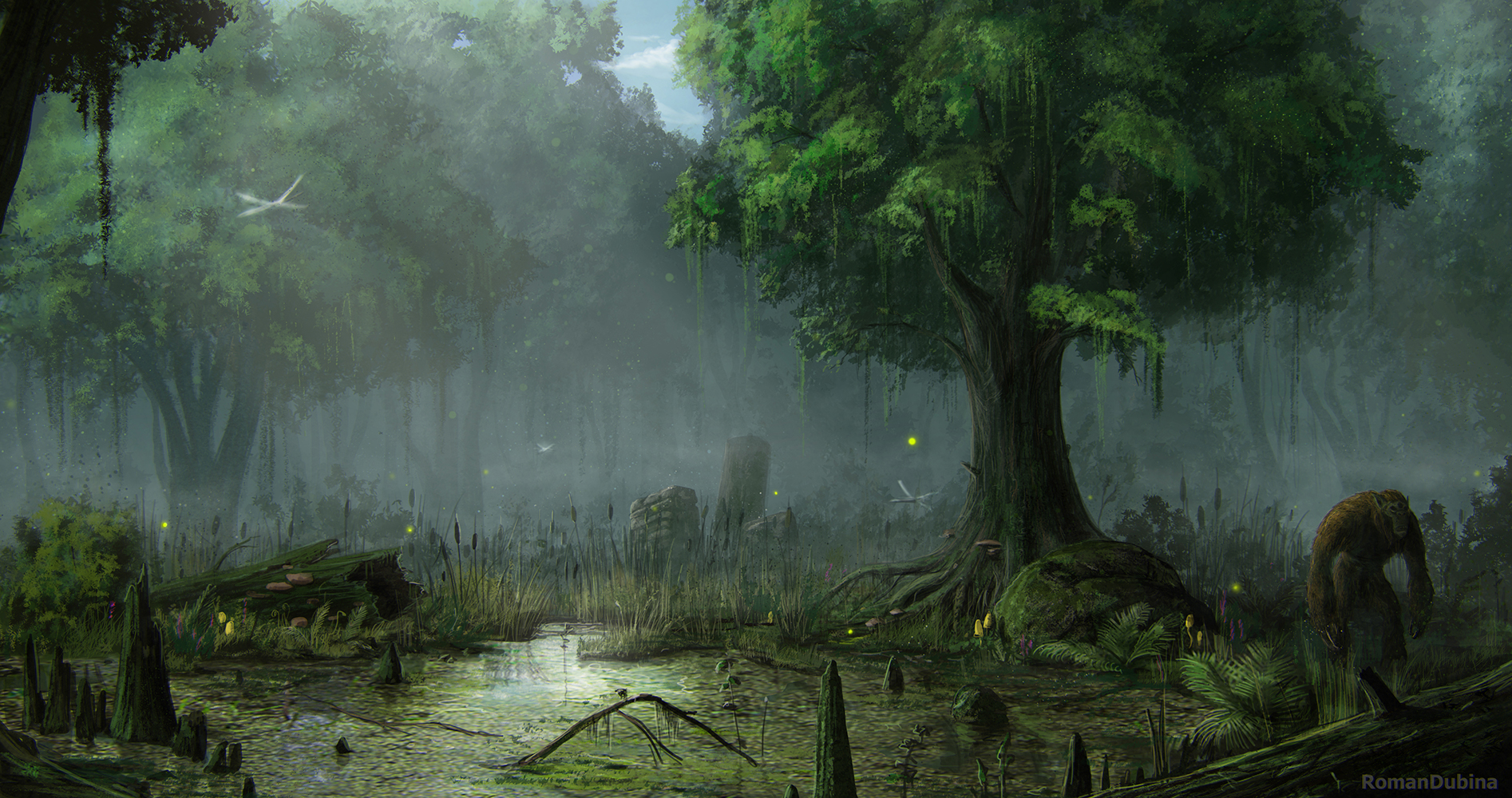 Blackwood is supposed to be a flat swamp/marsh area in Cyrodiil yet in Oblivion it seemed to have been an endless collection of steep hills. Our Blackwood will have a lot more character.

The Farms Of Cyrodiil 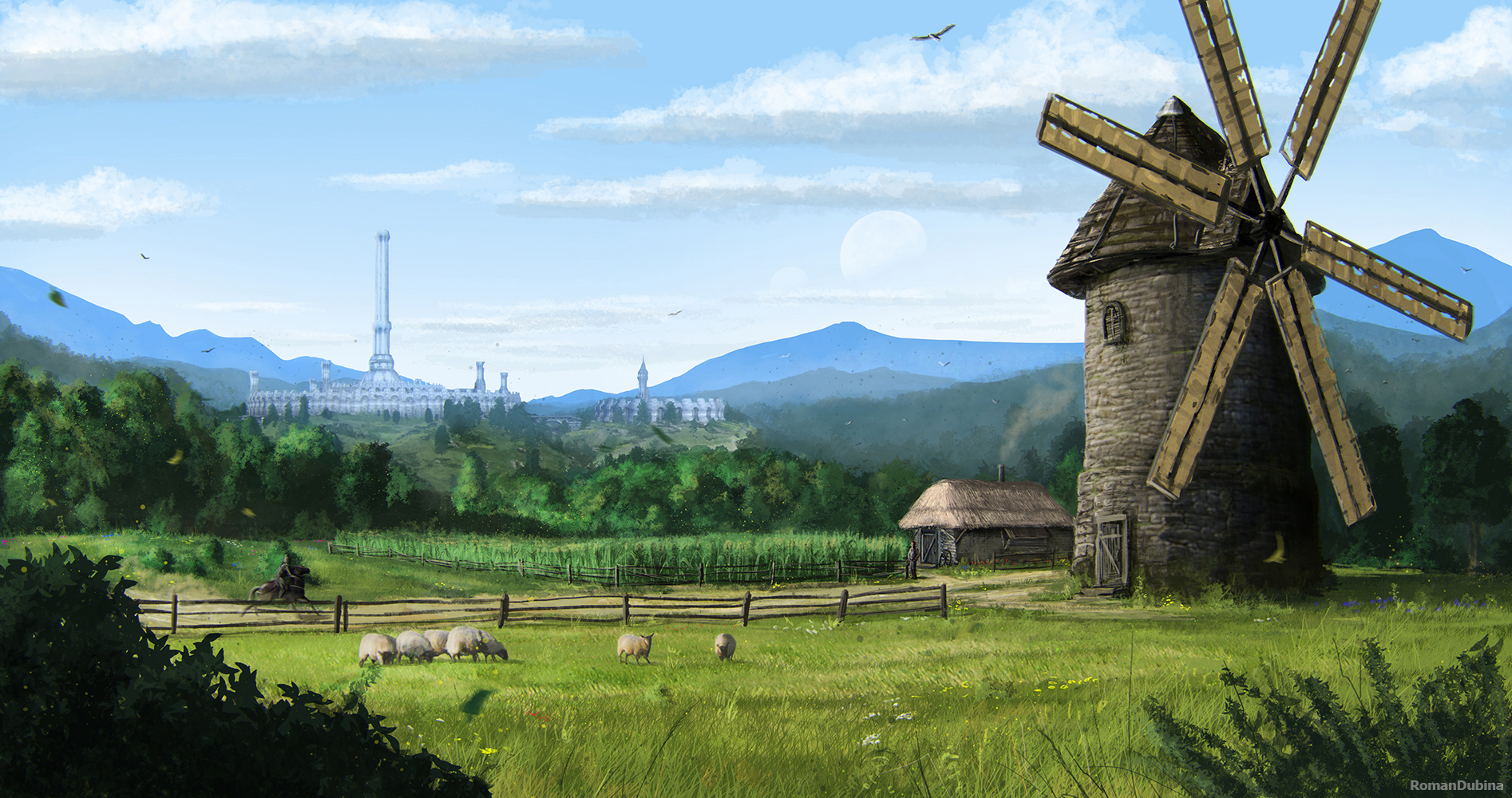 Oblivion originally had a lot of empty space near places like the Imperial City which are perfect locations for massive farms to feed the people inside the city. Yet there was nothing.
Not anymore! 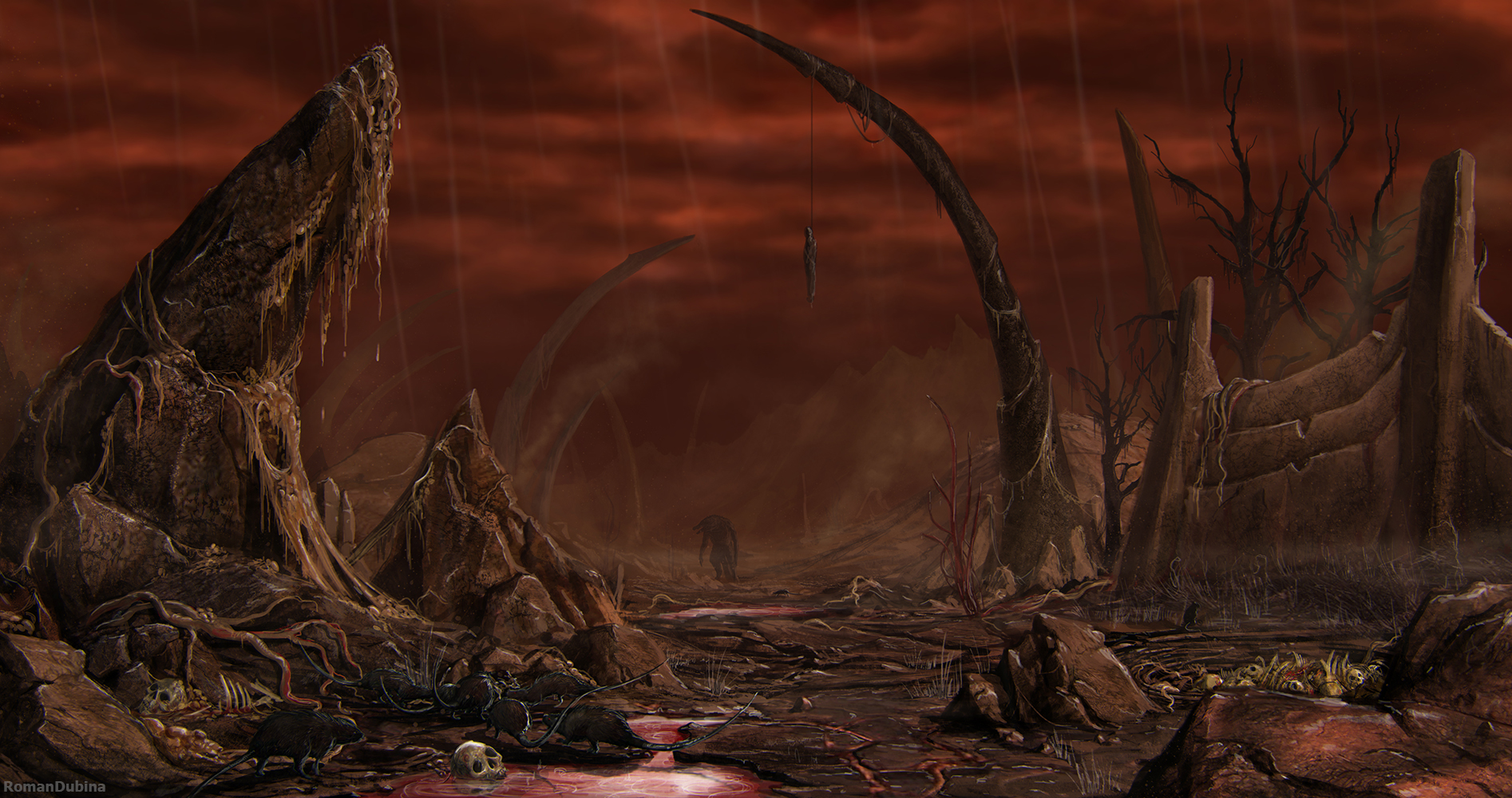 The realms of Oblivion have always been very unique and scary for new players but after you had been to one realm you more or less had seen them all. We will try to make the look more unique with some being nastier than others.

Thats it for todays update.
I hope you enjoyed a little sneak peak and we will soon show how some of these concept turned out in-game ;)

For more information and frequent updates I suggest you have a look at our social media link below:

And finally catch our development streams on Twitch

I love this, anything that attempts to recapture some of that Weird Cyrodiil atmosphere described in the PGE is welcome.

Will you attempt to make the Nibenay region more colorful and more urbanized?
There were only like three cities in the original game (I know Bruma is geographically Nibenay, but I count it as a Nord town essentially), all very detached from each other and with next to nothing inbetween which did create a dreadful idea of a low density region, the opposite of what Nibenay is meant to be. Some more villages with rice farms or something would be lovely. Maybe even the introduction of some of the weird cults besides the Ancestor Moth thing, like Akaviri heroes or saints or totemic animals or something.
Will there also be a difference in Colovian and Nibenese clothing?

Yes we most certainly will! We are adding a lot of settlements throughout Cyrodiil as a whole. Some areas more than others ofc(no-one wants to settle in Blackwood).
Citiies as u can see are getting some more love ;)
Differences between Nibenese and Colovians most likely will stay minimal as finding 3D artists who can make clothing is really difficult.
Its most definately on my to do list but as I need to stay realisitc its nothing more than an idea among a list of high priority tasks.

Yes we most certainly will! We are adding a lot of settlements throughout Cyrodiil as a whole. Some areas more than others ofc(no-one wants to settle in Blackwood).
Citiies as u can see are getting some more love ;)
Differences between Nibenese and Colovians most likely will stay minimal as finding 3D artists who can make clothing is really difficult.
Its most definately on my to do list but as I need to stay realisitc its nothing more than an idea among a list of high priority tasks.

Will these extra settlements be in an optional plugin? Could you give us an indication of what sort of "customisation" there will be in terms of installation?

Everything beautiful and essentially great..

I must admit that I'd love to see all those things.. But at the same way I feel that the last 2 years of mediatic success of Skyblivion brought this project to a standard twice if not 3 times bigger than the original Plan..

I remember around mid 2016 you posted a pic where everything was supposed to be navmeshed after months and months of works.. and the idea was to implement the old oblivion quests in order to make this game playable in a reasonable piece of time.. with these changes the entire landscape will change, as the navmeshes will I think, making that old job probably a waste of time.. apart from that.. I'm honestly fighted right now on Skyblivion.. Because for a very long time I thought that this was going to be the very first HUGE mod to be released and eventually improved step by step.. Now I see a lot of work ahead.. much more bigger than it was the original one.. And even if I'd like to have it now, I Really really really hope that you will achieve all your goals even if this will require so many years.. Once again, Keep up the good work.

Hi there and thank you for you question.
Essentially what we are doing atm is using the time that is given to us to its full potential. Quests and scripts are still being worked on and fine tuned but since this is a huge task itl be a while longer before everything is 100% functional. In the meantime I am putting all my energy into helping our different departments to punp put concepts and new assets at a fast pace. As soon as quests and creatures are done and working we will be wrapping our work up and getting ready for release. Afterwards we will continue to support the mod with updates but thats mostly just tweaks. Long story shiort: we do what we can in the time we have.

For people who have no interest in all pur enhancements there will be a vanilla Skyblivion which is a 1/1 version of Oblivion. The finished navmesh will be used for this and also as a base for our new landscapes.

Sry for all the typos Im assuming are im the text but Im out for dinner and on my phon atm.

Have a good weekend and thanks for checking our MODDB ;)

I know you're probably wanting to be deliberately vague or secretive about a release date, but I don't see a project as ambitious as this coming out before Q4 2018 at the earliest. Do you have a timeframe to release in 2018 at all or do you know/can you tell me if is this planned for 2019 or later?

Everything looks awesome!Keep it up guys and good luck!

It looks good, and Oblivion was great for its time. I just wish that 12 huts wouldn't pretend to be a huge city. It would be great for immersion if the redone cities, had more houses and farmland around them. I know it would pose massive extra work, but I dream. I dream.

This looks amazing!,When are you going to release the first alpha/beta of it?.

All of it looks so beautiful. Definitely going to use some of these pics as desktop backrounds.