More info on Sim Hero v2.0. In this update we share screenshots from the new tileset, crafting, the GUI and the all new Technique system!

Posted by geekfevermatt on Jun 1st, 2015

Development on Sim Hero v2.0 continues and we have some new screenshots to share!

First up, we have a preliminary screenshot of the new tileset for the overland world. It's more muted than the RPGMaker base tiles and we have some new building art here and there to sprinkle in as well: 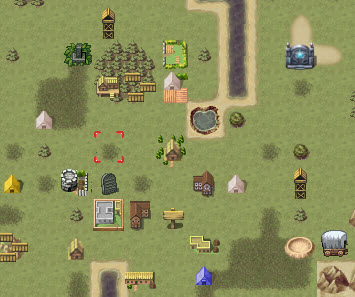 We're still trying to work with some more drastic change tilesets, but we'll see how it looks and choose the cleanest, best one we have available.

As part of the v2.0 kickstarter, we promised an improved interface, and that continues with the new crafting interface which should solve many of the gripes with the old system: 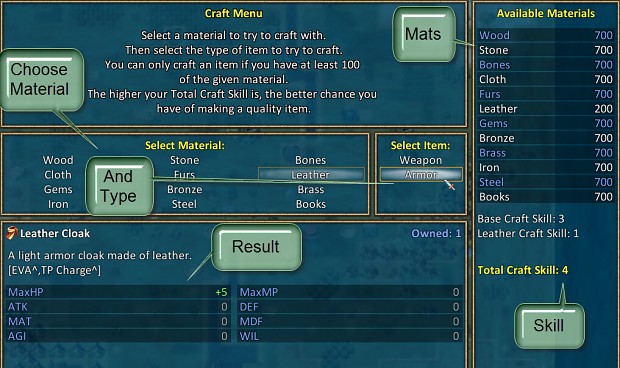 Hmm... Did you happen to notice that "TP Charge" bonus on the Leather Cloak? Well, that system is finally in Sim Hero! Each hero can learn and SET a "technique" (which they learn, find, or trade for). Then, during battle, they gain TP (Technique Points) based upon their chosen strategy. A healer may gain TP when they heal HP. A shifty individual may gain TP when they Evade, etc etc.

TP's now remain from fight to fight as well. So, as the party gets towards the dungeon boss, they will hopefully have a nice pool of TP available to take them down with more ease than in the past. Of course, upon returning home, TP is set back to 0.

All loot was combed thru to adjust for the 2 different stats that affect TP gaining: TP Regen & TP Charge. New items were added. And a new Class line is planned to utilize TP Charge/Regen as part of its core playstyle.

And, lastly, for this update we have another interface improvement screenshot to share. This one is the kingdom overview:

In the next update, we hope to have screenshots of the new "Monarch Action" system, big castles, revised diplomacy and much more. Stay tuned & Happy Adventuring!

Massive! Loving the improvement of the interface. I'm not sure if I like the "drabbing down" the look of the game! Seeing that leads me to think of how cool it'd be to have multiple tilesets, hell, how about a volcanic world tile set, Snowy world, etc, ala Starcraft.