When a group like Silicon Echo, the asset flipper downloads and takes ideas from my mod. don't think I haven't noticed.

Hello folks... so I've made a few changes in what's going around and how I release my mod within a few months. Hopefully I should made and release what's worth while until then.

So recently, the news hitting the headlines recently from Steam hitting out towards the company removing almost 200 games off their marketplace. The reason so amazing that even I was a bit shocked with what came out. All these game came from one "developer" because this developer were purchasing assets from Unity and re-arranging them and somehow released them onto Steam. The amount of games they've plastered on there, really amazed me and how they were removed.

Regarding the videos that were coming out, I usually watch those. I mean I watch them out of interest since I got welcomed onto the Steam platform. Since Digital Homicide made their mark with their clusmy 'lawsuit' against Steam and Jim Sterling, I've been getting into them. Now that Silicon Echo really made a mark which I found discouraging and really stupid, I couldn't help by notice. I'm amazed they were stupid enough to litter the store front with fake games. Really but something else caught my attention. This claim I'm making may seem far-fetched.

These guys, they've bought Unity, they buy assets, re-arrange them and just flip them and later push them onto Steam, which got them into trouble but that's what didn't bother me the most. What bothered me the most was their kickstarter campaign on their indie game, the Herbologist which they needed to get their money to help make. This bothered me on a whole another level and that's because of the name they used. 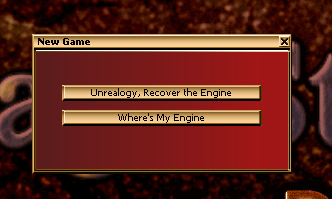 When I first 'released' Salvage Storm back in August 2015, I've reworked the user interface in the start menu of Unreal Gold. I wanted to treat anyone who downloaded the files, so I made something creative. In the mod, because the player had to fetch an engine which represented the software... the Unreal Engine, I had to call the chapter something worth while. so I created the term 'Unrealogy'. I wanted players or other modders to feel like they were part of something fun, like they were 'Unrealogists'?. Like any game or anyone who had taken their time to download the files I've put up here, I just wanted to treat players whoever downloaded.

... but seeing how Silicon Echo's campaign was made in 2017 of this year with the term they've used, I really wondered where they got the inspiraton from? I'm talking about guys who buy out assets, browse for more and mash them up to create something totally new using Unity however because the Unreal Engine has their UDK in Unreal Engine 4 and it's as accessible (much more accessible actually) as the Unity engine is with all their assets on sale, I really wonder how the term 'Herbologist' was coined and why?

Unfortunately... I since deleted the download with the date which I'm trying to refer too. I deleted it because it wasn't good enough and because of the Steam feedback, I wanted to improve on the game alot, so I had no need for the download. So I'm unable to fully proof why those guys at Silicon Echo may have downloaded my mod and taken something away from it and used it as experience on their kickstarter, so I'm stuck trying to prove that. But because I know that I've done it, it just drives me maybe more to the marketplace. It's in the other download I've put up recently but that was an entirely new download.

It's not illegal or immoral with if they downloaded my mod and taken some inspiration, I'm happy but only for a while but the idea they could have read something from my mod, used it to make a title of their own, go onto somewhere like Kickstarter to use that term to help sell what they were telling the world they were making and take $10,000 US which could have been spent on asset flips and not give what they wanted. I'm really beginning to suspect that those guys at Silicon Echo really don't appreciate mods or the community of developers. Especially when they're asset flipping. If they really want to make and sell assets, they should mod instead, not make fake games and ruin the reputation of Indie gaming on the whole. There was a reason why I didn't jump into the Indie game field. The story of Silicon Echo really had got to me in that way. I may strip stuff like that also because of what had happened and how they used terms and marketed them. I don't know but I'm hanging onto that. Herbologist was a dumb idea aswell but it sucks that people pay them when they asked for money and I am keeping an eye of them if they re-appear again.

I should have blogged this... but because of recent events regarding Silicon Echo and their kickstarter campaign which has been reported, I've decided to remove the 'Unrealogy' statements from my mod for future releases. I mean look on the bright side, I can make to out to style out my mod geared towards making it feel more engaging and less toon like with the dialogue I've placed there.