This is a data showcase of photos and info for the Current and most complete version of Link to the Doom, and for the Heretic version.

Link to the Doom is a Weapons and Monsters replacement mod designed for any map or mapset that relies on Classic spawns of monsters and weapons. 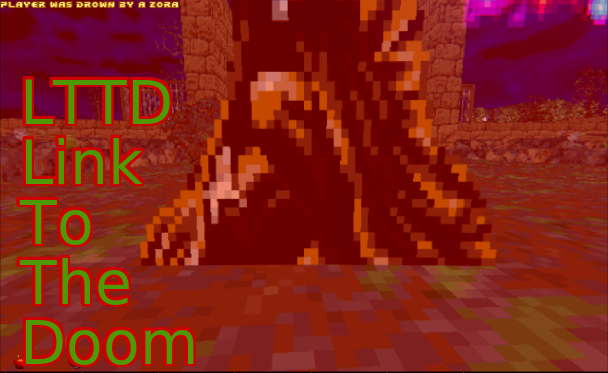 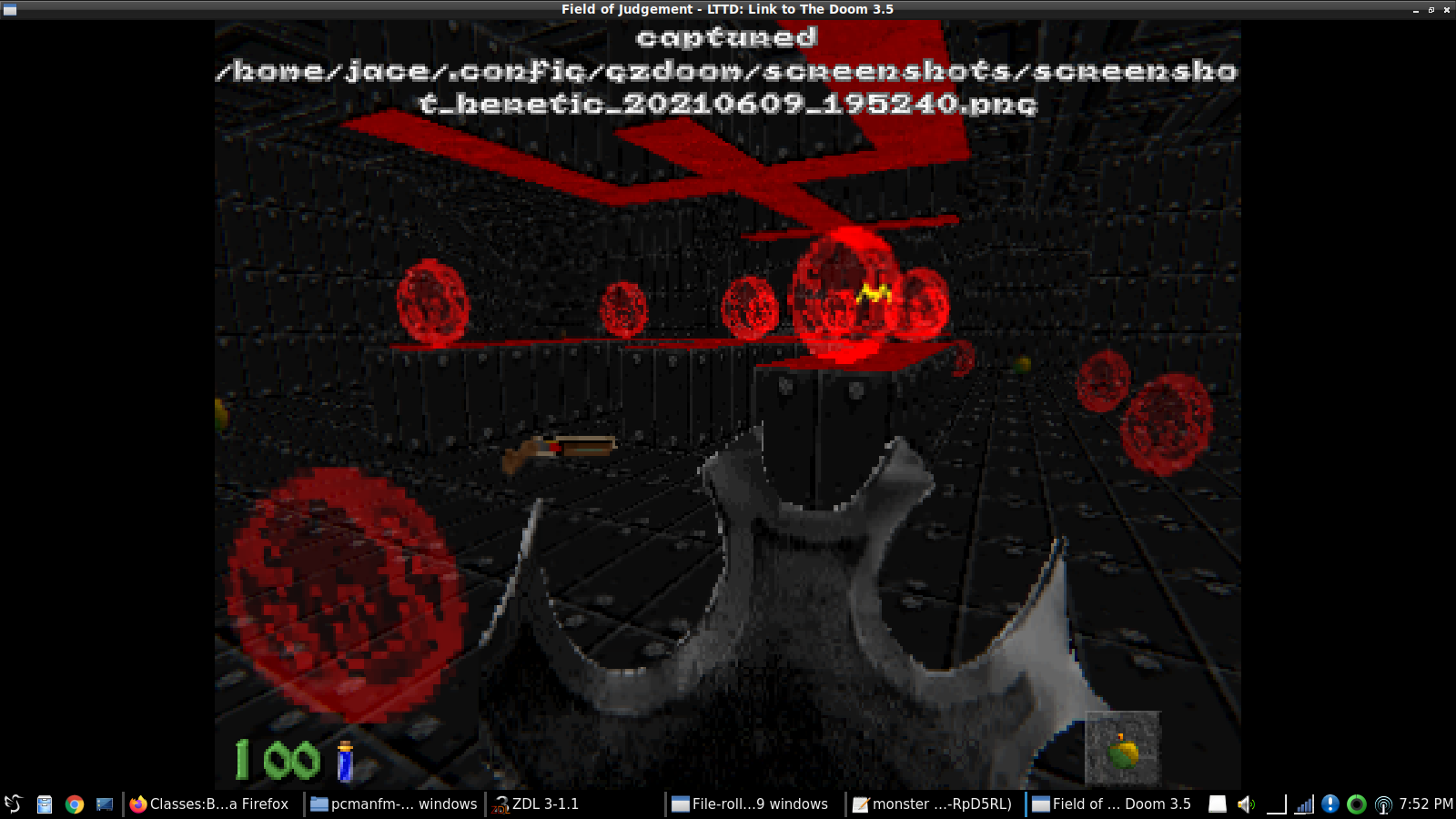 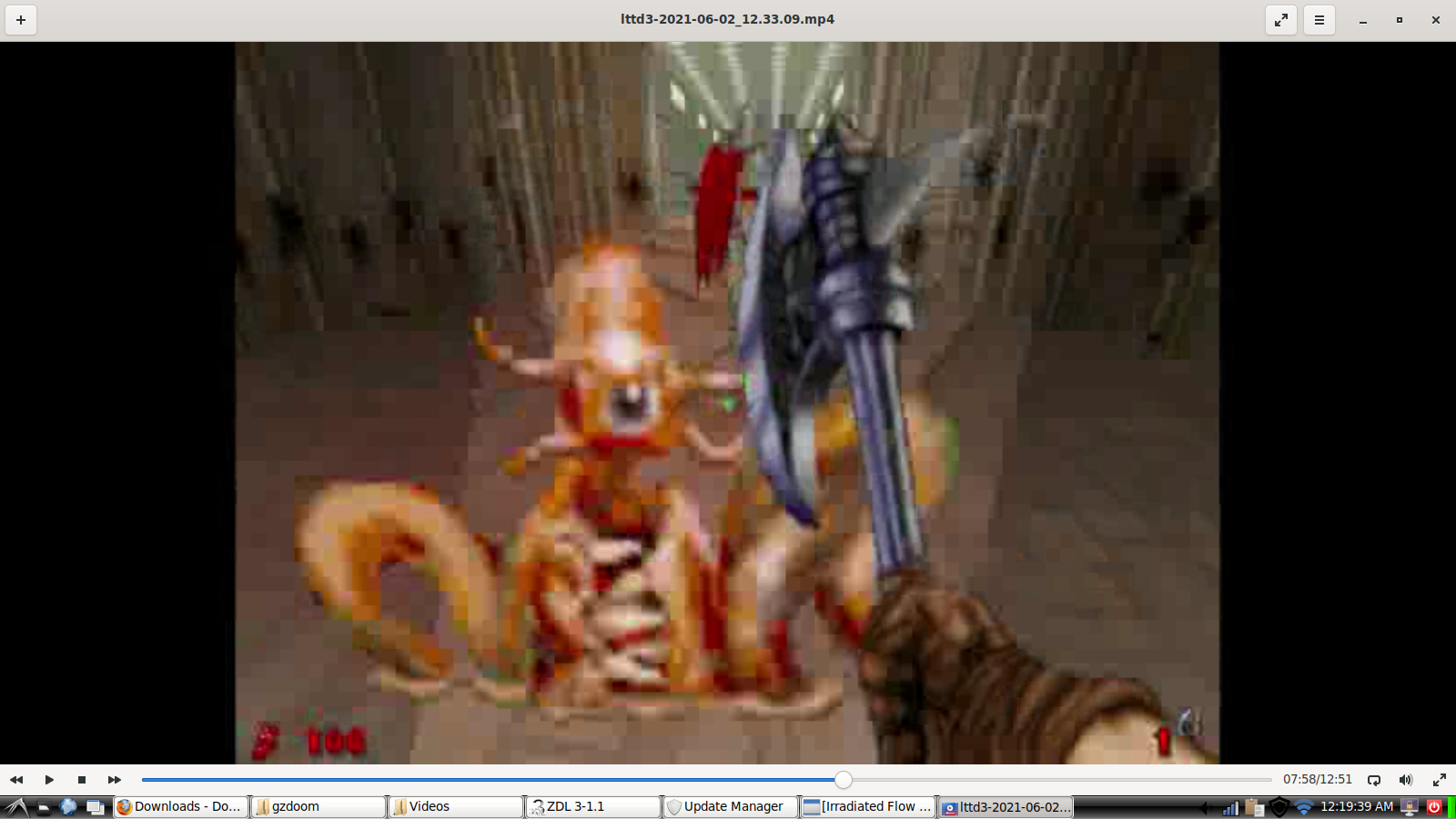 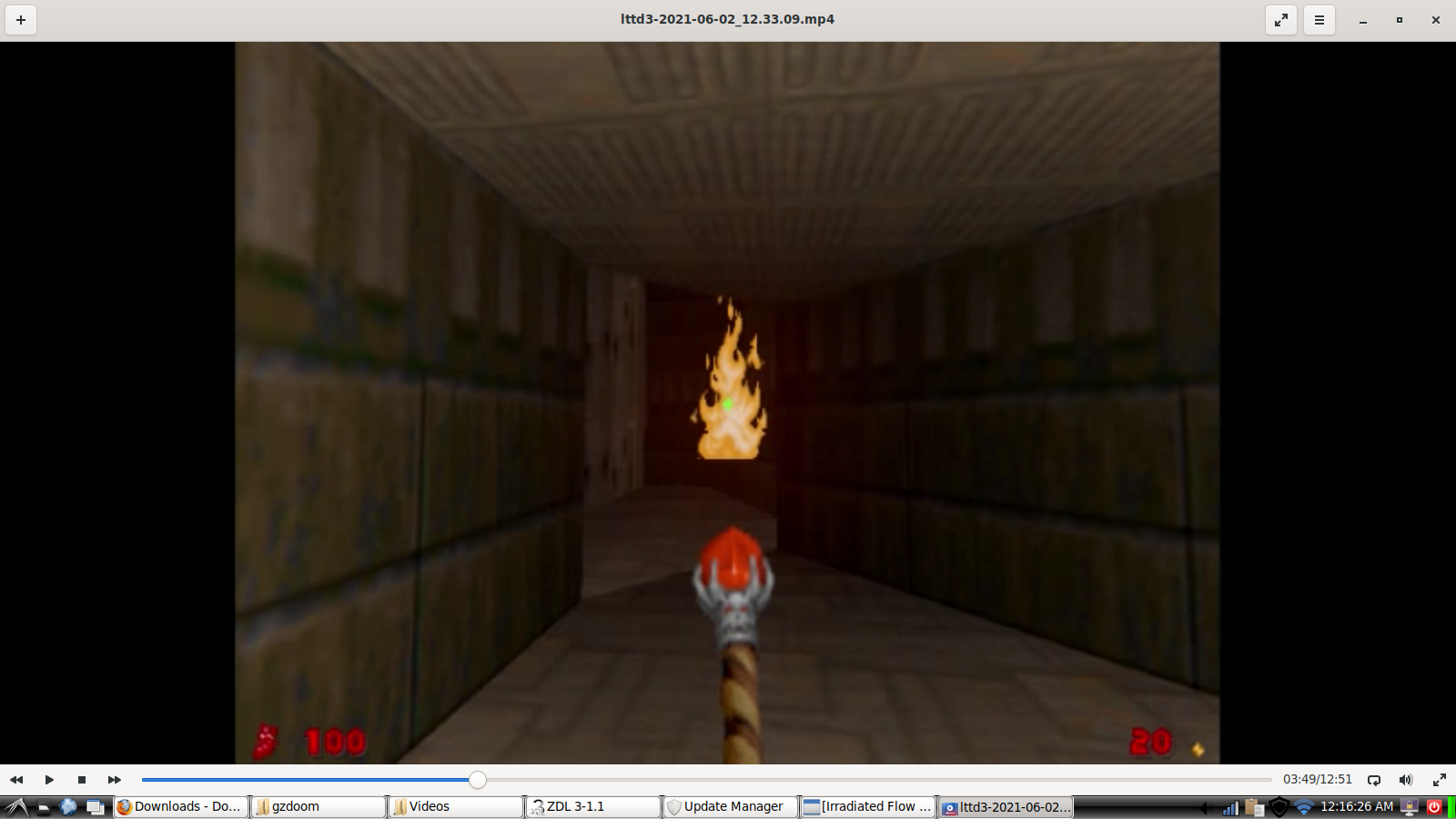 Showing the Flavor Text and KingSlayer 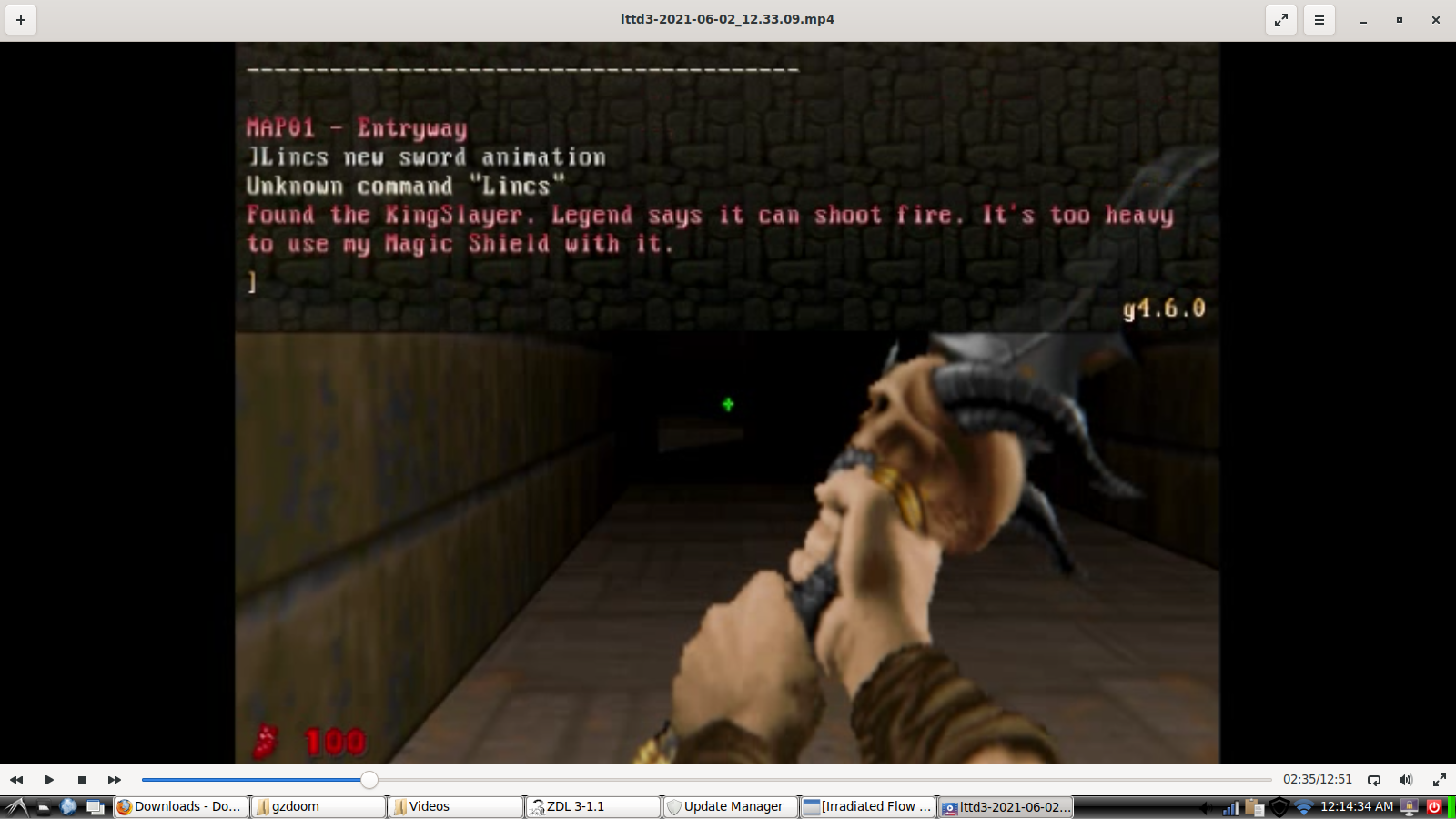 The Demo Video for Heretic version, But its just an adapted version of the Doom version 3.5

The Main Info directly from the Readme included in the Mod.

5/14/21--- Release of LTTD V2.5-- Did a major gameplay update and rebalance of weapons as follows:
1. Wizard has a new starter weapon-- Magic Gauntlets that have a melee and altfire that shoots triple burst Magic Missile that uses Magic ammo
2. Bombs are now a new weapon: Replaces Rocketammo spawns and used by all classes. Primary fire is hold to throw harder+ bounce. Altfire is a hard throw that explodes on contact.
3. Bow now shoots Ice Arrow on the altfire.
4. Crossbow now shoots Lightning Arrow on Altfire
5. Thief start weapon is now the Twin Axe.
6. Slayer can now equip the Kingslayer.
7. Barrels can now drop Bombs.

4/25--- Realease of LTTD V2.0 Classes!!! And monster rebalance. All updated in the Main Description Below!!!

Title : Link to the Doom

Link to the Doom is an overhaul of Medieval Doom. Practically everything has been overhauled in one form or another,
and custom monsters and weapons have been added from Realm 667 and tweaked by myself to give the best feel possible.

The evil Ganohn has taken control of "insert whatever" and it is your
task to fight off the army of evil full of Moblins and other strange magical enemies. You have 5 classes to choose from.

AUTHOR NOTE: --- My Advice: This mod has a custom difficulty settings. It is HARD from Normal on up even to me as it's creator. If you want the most balanced experience then start as Linc because his Shield will give you plenty of breathing room. Enable Jumping, and use the secondary Status Bar, not the vanilla status bar with Doomguy's face showing. Break every barrel you come across because they are basically Loot Chests. The Staff altfire is a Healing Spell that can heal you up to 200 health max. GZDOOM can open Zip files. Just drag and drop the newest version. This mod works with any map sets that run vanilla monsters and weapons. Bind Inventory Buttons so you can use the Inventory Items: Potion, fairy, Holy Shield, Hylean Wings

Linc- Magic Shield + Sword: A sword that swings in a wide arc. The altfire does a short charge up animation AND CAN BE HELD by holding Altfire before it releases a blistering sword combo followed by an explosion wave. No ammo needed. While SHIELD is showing you are INVINCIBLE.

Wizard- Starts with Magic Gauntlets: Primary fires a melee attack that also vampire Health back into you. . Altfire is triple burtst Magic Missile that uses Mana. Starts with 300 Mana.

Crusader- A lone warrior battling the undead: Silver Sword: Only a mainfire attack. Vampire Killer: Only a Mainfire Attack
Keyconf:

Weapons to be found:

Hylean Bow: A Magic bow that shoots a Freezing arrow on the Altfire that uses mana ammo shared with the wand and costs 5 mana per shot. You can press and hold and release with both firing types.

Volcano Hammer: Hybrid Melee and Ranged Weapon. Altfire throws an exploding hammer. main fire swings a slow melee attack that also does a damaging shockwave centered on you, but doesn't hurt you.
Relaces the Rocketlauncher spawn.

Royal Hylean Trident- Has only a primary fire. Used by all classes except Slayer. uses Mana ammo. AltFire is a melee attack. Poke Poke.

Vampire Killer: A strong Crossbow that fires fast. No altfire

BoomStick: A single barrel shotgun that reloads fast. Uses arrow ammo due to a magic primer.

Hylean Potion: a Purple Potion that reflls your health to 100 when used. Automatic use if in Inventory when health goes below 50.

Holy Shield: Must activate manually. Fills Health to 200 and You get a Magical SHield aura that absorbs 100% damage while it lasts.

Hylean Wings: You now have the power of Flight when you activate these.

Stalfos: A naked skeleton that is melee only

Zol: a solid shadow with a nasty taste for meat. When it dies it spits out Gels.

Gel: A smaller version of Zol but doesnt do death spawns.

Octorok: Tentacle monster that is never caught off guard and shoots red balls.

Leever: Melee only monster that sinks below the floor and attacks in close.

Wizzrobe: Flying wizard that is invisbile until hit or attacks

Moblin WarLord: Bigger Moblin that shoots many arrows at once.

Maulotaur; Bipedal bull that can ram and throws fireballs.

BOSS MONSTERS: These guys are also randomized. SpiderMastermind is replaced by Ganohn/Cheoghganon or GanohnTaur. Ganohn never replaces a Cyberdemon spawn.
Likewise: Archvile spawns will be a Boss Monster that is most appropriate to Archvile spawns.

Vire Lord: A powerful monster of shadow and fire. Only able to be hit when it is still.

Arch-Pyre: A Demon of fight and lightning.

Baron of Darkness: The chiefs of Ganohn's minions.

King Wizzrobe: Rides an Aquamentis and will fire lots of different projectiles.

Ganohn and Cheoghganon : This is a 2 Phase fight that works on E3M8!!!! This fight is really hard.

Edit it all you want because that is what I did. This is a labor of love that I built
at home for extra challenge. It's only right that I share it and allow it to be shared.