Post news RSS Shiny new screenshots, and how Rebirth aims to scare your pants off!

Today I talk a little bit about my plans to inject horror into your sandbox experience. From dynamic events to enemies that appear only at night, there are a lot of things planned that will hopefully please horror fans (because I'm a huge horror fan too!)

Let's get into it shall we?

First of all, welcome, to everyone who has seen the game in Greenlight and has joined us here on IndieDB to track our progress. I'm very happy with the reaction the game has gotten on Steam, it is by far better than what we initially received on there. I think mostly, because people thought our game was "finished" and that we were some crappy company trying to sell you some shoddy product on Steam.

Like I've mentioned on Steam, the reason this page, and the Steam greenlight entry exist, are to gather fan feedback and to allow the community to contribute their ideas. Some of you may see your ideas implemented ingame, and I am trying to increase my transparency during the development process, so that could be as early as my next post here. At least for some of your ideas :-) 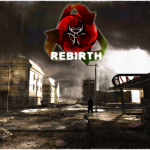 If you haven't, please vote for us on Steam Greenlight. We're nowhere near ready for a retail release of any sort, but Steam is a nice gauge for me to use to determine interest in the game. Plus, it sure would be nice to be able to do all that messy steam integration sooner rather than later, since there's nothing worse than diving and hooking things into your code many months after you wrote it. Either way, if you think the game is promising, it won't hurt you in any way, and it will definitely help us. Thank you! 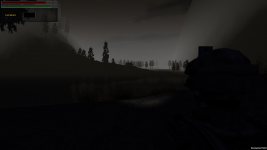 Horror is an important part of the game for me. I've always wanted to make a horror game, but I also like to make games that are satisfying to play. I love shooting zombies and seeing their heads pop off, love it. But for horror to be effective, you can't feel like superman. You must be vulnerable, scared, defenseless. Popping off zombie heads, en-masse then, is not really an option.

I kept on thinking about that until I finally came to a possible solution to my quandary between being powerful and being weak. Day and night cycles.

Most games use day/night cycles for aesthetic purposes only, or to mark the passing of time. In Rebirth, they serve that purpose as well. In addition to that though, Day and Night mark the beginning and end of two different kinds of gameplay as well.

During the day, scavenging and shooting baddies is commonplace. You run around and find what you need. 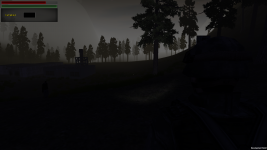 At night people tend to feel more vulnerable. How many horror movies take place in plain daylight? Very few. As humans we are trained to be afraid of the unknown, and you never know what's hiding behind that blanket of darkness at night.

Thus the idea was born of having horror come into play during the night. There are certain entities ingame that only appear at night. They are relentless, and they will slowly but surely track you and steal your life away should you be foolish enough to not prepare yourself.

In addition to night time, the game will also feature a set of dynamic and random events. A good example would be finding a note in a house, detailing the location of a stash... or possibly a trap set by bandits. It could be a haunting, where you set foot into a house and the door suddenly closes locks behind you, and you must make your way to the roof so you can jump down and escape. 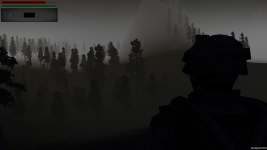 
I want to know if people are interested in getting some video devblogs periodically. This comes with the expectation of course, that people won't judge our little pre-alpha game too harshly, expecting AAA quality work right off the bat. In addition, I am thinking about running a livestream at some point where I answer community questions and create a few things for the game in real time, to show the community a bit of the work behind the scenes that I do. It may not be coding (its not very entertaining to see for a lot of folks) but maybe it will take the shape of designing a building in real time and putting it on the map. Designing a weapon, and item, or something similar.

I would love to see all behind the scenes stuff! I find it very interesting, especially with sandbox games :) If you need any help testing or story-writing stuff just ask :)

s0ne4ever from steam here! Registered and checking in to make sure you know that you have my full support for this game xD

I think keeping fans, viewers, horror enthusiasts, or whatever they may be with video devblogs would be a great way to stay connected to the community. As I, and many others on steam, have said before, livestream sessions do it!