In case you missed prior news, SHIFT will be releasing a public video demonstrating everything SHIFT has to offer thus far in the coming months. Also, the release date for the first public beta has been set for December 17, 2010.

We have been having trouble establishing a main website for quite some time but due to the coming release of the in game video, we decided to put the full website on hold and instead create a simple website that the community can visit and learn about the SHIFT mod in its entirety. The screen shot below is a screen capture of the working website that will be aired upon release of the first in game video. The website will host all previously released media as well as full information regarding SHIFT's technical features and story. An important note for those eager to see SHIFT; the website will be the first to host the video before we release it anywhere else. Stay tuned! 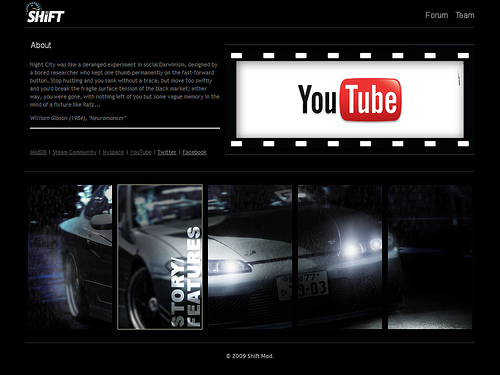 A Peek Into the Story

Just like the certainty of the physics in SHIFT, the story that drives the game has also been questioned. Since most racing games have rather weak or over-the-top plots, SHIFT promises to deliver a much more interesting story to the player to help tie in the various game modes and levels that SHIFT will have to offer. 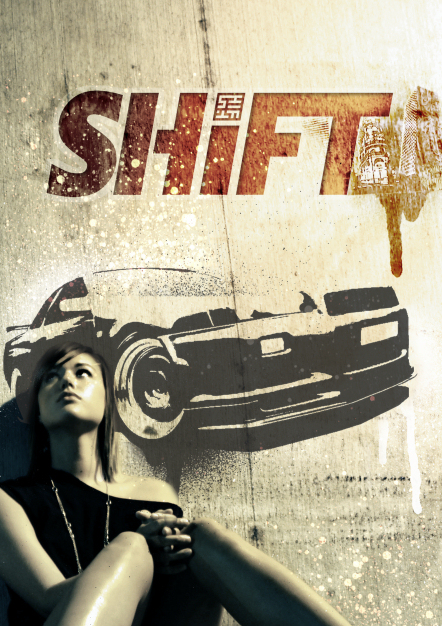 We will leave you with this piece of cover artwork. For the record, the girl portrayed is one of SHIFT's actual actors who will be playing a voice role (as well as a character in the game). She plays Sara Margo; the younger sister to the antagonist who becomes your friend. We will leave the rest for the community to speculate on.

As a teaser leading up to the video as well as to assure you we are not dead, here are 2 early in game screen shots demonstrating SHIFT. What you are seeing is the lap timer in the top corner, the car viewed in a "dynamic" third person camera mode, the working analog tachometer (at 162 mph), speedometer in MPH, as well as an empty nitrous guage. The nitrous guage as well as many other features (including physics) will be fully demonstrated in the future video.

Some people may wonder why we added black bars to the images. The black bars are Actually layered in game and it gives the game a very cinematic wide screen feel which will help accomadate the games story driven approach. 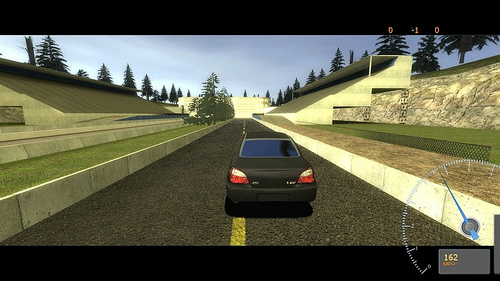 An important thing to take note of is the fact that all these assets (tachometer, car model, and racetrack) are temporary and do not represent what you will see in the future video. These are simply for testing purposes only. 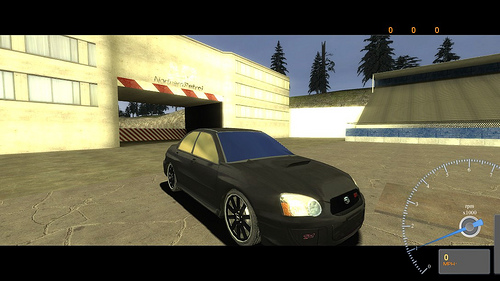 This mod would NOT be where it is with out the help of my talented friends. If you think SHIFT is something you would be proud of and would want to help out, send me a PM over ModDB and I will arrange it. Currently, all the main roles to get this mod working are already taken, but we are still looking for several people to fill these roles to help this mod advance.

If you are interested in SHIFT and want to be a part of the community, make sure to visit these links.

you are garbage :D

I hope people don't rate you down. xD

Thanks man. I appreciate it. You're like my moddb brother.

I agree. +rate that guy!

on another note, this mod seemes nice....

This mod is really shaping up to be something epic

This mod has always been epic. We are just spoon feeding very little information to the public until we feel satisfied with our progress.

I cant wait for it to come out either! You guys are going to love it. You better because we will not offer refunds.

"failure to understand a joke" awarded to bellus.luppus....

Pretty girl, cool that you got her as a voice actor.

Yeah I agree; I cant even imagine the flood of facebook friend invites she will get once we add her name to the list of production credits though. :P

seems like the original picture was taken a few months ago now tho.

Shame that the picture of her is blurry. Nice to see some (theoretically?) in-game shots, even if they're just pre-lims.

I'd like to re-iterate I was not bashing your mod waaay earlier, if you even remember. Just that stock vehicle physics are awful (and it sounds like you have tweaked, or rather completely overhauled, the physics here) and the mods that I've played that are *released* use pretty much stock vehicle physics.

Keep doing what you're doing (Though the lack of details is agonizing!), looking forward to the result.

Looks nice but source is wrong engine for this mod. Cars don;t work in source they always look horrible.

The reason that this car looks bad is because it is from a car model pack for Gmod.

Our dedicated models look far better than this... But that is a surprise ;D

Can we has video nao plox?

Great news, cannot wait for the video to come. ;) Oh and check your pms soon! :D

Screens looks unexpectedly nice. I'm saying unexpected because these shots gives a feel like this is a racing game not a Half Life mod. Very nice.

Wait a minute... I thought that 118 MPH is Source's maximum, but you have 162 MPH there. You modded it or faked by shrinking everything?

Do you have the license to that car model?

You need a modeler? Why didn't you let me know? =(

although, i'm sorry to say, it looks crap. showing its not dead and sinces its still alpha (meaning u can improve), im tracking :) tough love

Awesome! Can't wait to see what the video will look like. Keep up all the great work guys.

Looking sweet! keep it up.