It's been a very long time since the last update! A long break from game-development is to blame... the project has a new name now and the profile will be updated soon! Read more about what has been going on in this article.

Hey there community, my brethren in gameforging,insanity manifested in polygons and syntaxes!

I feel the need to update this thread before Lee releases the next Beta and I can start to get further into developing this game. So far I have been converting and creating a lot of base models for Shavra. I am an artist now, at least in an amateur sense. In november I will take part in a larger art-exhibition and to me, this is kind of the point where I evolve from being a guy who paints the occasional picture to being a guy who has shared those paintings with an audience after a few years of work and is thus an artist. This directly translates into Shavra* in a sense that the visual development of it takes place on a digital canvas that I share with all of you, people who have been following my projects that constantly failed, mostly due to the engine, I admit that, but also just as often due to my past incompetence. I don't have both excuses anymore so I try,( with the time I have to work on this, which isn't much per week, ) to bring you the best game I can make. I desire to craft a direct juxtaposition between my traditional and digital work. Sure, technically it won't be anything noteworsy in the eyes of other games but I hope that I can attract some attention with its style.

I guess this was just a rather long way of saying: Hey guys! I try to make a game that looks really good.

What I did after I imported all my rocks and boulders and terrains was... discovering that I had even more of these. Which I will look at in the future, regardless of that I proceeded with importing my foliage and creating aswell as rearranging architecture for Shavra*. I got some pretty impressive gothic/medieval architecture working. If I had decent lightmapping, I'd show you! ...but I don't so I arranged a little low-res teaser shot, simply because these things don't look good unlit. 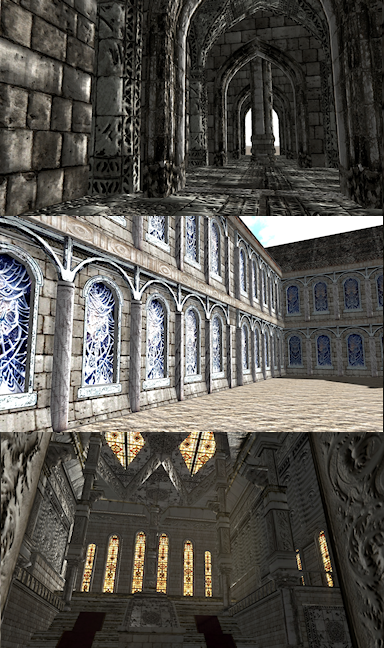 You might notice the white-ish color of the architecture. This is because I instantly fell in love with reloaded's white desert terrain and chose to use it just as it is for Shavra*. It looks way more "extradimensional" and fits the style better than yellow sands. Now, as the resources the buildings in the games universe are crafted with would most likely be from the surrounding areas I had to adjust the color pallette to the terrain. The results look good, altough, if you remember my horror games from way back, it was not exactly easy to get used to working with "making things brighter". It was quite hard for me to get good results, to be honest

Whe are quite used to see dungeons and castles in dark, mosscovered and gritty stone colors. I hope that what I create here will look authentic in the end.

Initially, I intended to update this once all my foliage is converted and ready, but by then Lee would have likely already published the next beta, and then I'd have other things to share with you guys. Please, just take my word that I have tons of plants and some of them look really dang good in reloaded!

It comes natural to me to use a lot of plants in my levels. You wouldn't know, because it was ...well...less well working in classic.

I hope that the new lightmapping system will not bring back the old transparency, static/dynamic entitie problems though!

Shavra* will bring back my old nemesis. The courtyard! Why? Because I won't let it defeat me. I have introduced the courtyard in 2010 (!) then it looked like this. (Not my finest work of that year, I have done much better back then in old Relict times.) It eventually evolved into this. This was from my short-lived Unreal Engine 3 project. However, altough I kept promising the people that supported my work throughout the years that they will "soon" be able to walk around in it in a demo, I never delivered... and its just a scene I have to get in a released project, which is why it will be in Shavra*s Beta demo! Check out the new version, all modeled with dis- and then reassembled parts of a dexsoft pack: 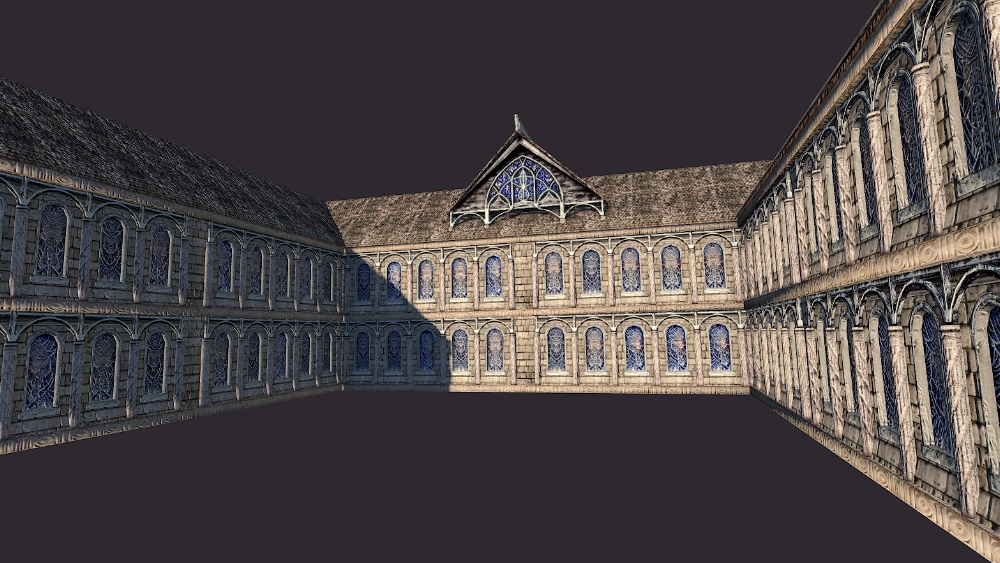 The highest-poly wall has only around 3K polygons. I also managed to compress the textures down to 2MB. Altough I assume that reloaded will be decent performance wise...I don't know that it will so I just optimise aswell as I can without sacrificing visual quality and hope for the best. This is of course just the top part, the lower part will be added in editor later. The UDK version probably had 4 times the polycount as I just slammed in fully modeled props that disappear 80% in the wall and modeled all these windows in full 3d. ...I was just not yet competent in 3D modeling stuff.

I like the artistic windows of the building...actually I've spent quite some time retexturing it properly.

*Renaming Spyra into Shavra (this change will be made more apparent next week or so). Why? I noticed that every english speaking person would refer to the game as "Spie Rah" where I thought it would be pronounced "SpÃ¼ ra". (germanic) Its also really close to A) a popular series about a purple little dragon that I enjoyed on the PS1 B ) The name of the world in one of the later FF games. C) the name of a popular electronica musician. Shavra on the other hand is less used and I'm never going to make another bleak, post apocalyptic Shavra-shooter again. Most projects didn't run and the one I did release doesn't run that well on more modern OS. I'm doing well with doing my own thing and Spyra sounds too much like a dozen other "things" that already exist out there.

* Converting and enhancing my rock/terrain and foliage media

* Trying to get a sheep to work in reloaded -> introducing myself to the world of LUA script.

* Adjusting the colorpallette and resolution of the Legacy Pack Media.

* Changes in tone. You might have noticed that I added some horror elements and darker areas in the last update of Spyra-FPSCC.

This was because a sense of danger and dread would carry a game that gets interrupted by a loadingscreen every 4 minutes. My horror games had a creepy atmosphere that masked lots of the technical shortcomings. I'm assuming that my levels will last a little longer in reloaded so I can drop that and get back to making Shavra a more peaceful adventure. The horror influence also called for darker levels (which where planned to be deserted in the concept of old Spyra but are now planned to be teaming with life in the new Shavra) because the old normalmapping shader had, even after constant tweaking, the tendency to make everything well lit look like plastic. it was dreadful to work with. (this was also the point where I quit making games for a solid few months

Many of you, who are still around, have already commented on and supported this, and many more of my projects in the past. Its a joy to be part of this community and I thank you all for this. After all, a game no-one will play isn't worth making.

Whew! Long post, long day ahead, I'll get some rest! Comments are, as always greatly appreciated!

Great post! Nice to see another Reloaded user here. I'm currently learning about the Unreal Engine 4. You might want to have a look at it; it's very impressive.

Also, you are a very impressive architectural modeller. I look forward to seeing what you do next!

Is there a way I can donate to this project?

Hello! Thanks a lot, but not yet! I will concider donations once its absolutely 100% certain that the project will succeed. I'm not one who takes peoples money and does not deliver a statisfying project. I really appreciate that you want to donate though! :)