Here, we outline one of the playable clans in Sengoku, and discuss their history, clan bonuses and unique units. Today's clan is the Uesugi clan. 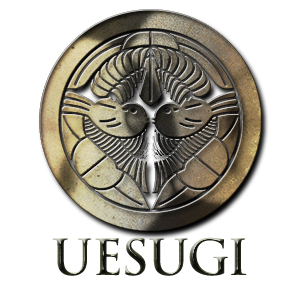 Since the Kamakura period, the Uesugi clan has been an influential family in Japan, and is also one of the samurai clans that still exist in modern days. During the Muromachi period, the clan consisted of three branches, the Yamanouchi, Ōgigayatsu, and the Inukake, and shared their power across the Kanto region.

However, during the Sengoku period, with the rise of Hojo clan, the Uesugi was backed into a corner. The Ōgigayatsu branch was destroyed in the siege of Kawagoe castle, and the Inukake was also under attack by the Hojo clan. The other branch of Uesugi, the Yamanouchi, also lost many battles vs the Hojo. In a desperate attempt to survive due to the expanding Hojo, Uesugi Norimasa, the leader of the Yamanouchi, fled to his retainers lands, which were owned by Nagao Kagetora.

Part of the deal with Nagao Kagetora meant that Norimasa would adopt Nagao Kagetora to the Uesugi clan, and would be noted as the official heir to the clan. Nagao Kagetora originally changed his name to Uesugi Masatora, but would eventually be know as Uesugi Kenshin, the “Dragon of Echigo”. Uesugi Kenshin was already an expert commander, after dealing with and taking control of the Nagao clan himself from his previous brother. As Uesugi Kenshin, he would go on to revitalise the clan, and became one of the most powerful warlords of the Sengoku period.

After the settling with the threats of the Hojo clan, Kenshin soon met his biggest rival in his life time, the “Tiger of Kai” Takeda Shingen. After two lords of Shinano turned to Kenshin for his help against Takeda’s invasion, several skirmishes started to place between the two warlords. In 1561, the dragon and the tiger clashed again in a fourth battle of Kawanakajima. It is said that in the battle, Kenshin utilized a new tactic known as the “Kurumagakari” formation, where soldier switch their position with each other allowing the wounded and tired troops to return from the frontline, allowing Kenshin to counter Shingen’s attack. According to some sources, Uesugi Kenshin himself rode to Shingen and slashed him with his katana, with Shingen defending himself with his military fan. The casualty rate of this battle was heavy for both sides, and who the winner was seems to be debatable.

Interestingly, the two rival Daimyo somehow formed a respectful relationship with each other. Once the Hojo clan cut off the salt supplies to Shingen’s territory, Kenshin immediately sent salt to his rival. When Takeda Shingen died, Kenshin even stated that there won’t be another hero like him again.

Uesugis cause of death is up for debate, but he himself never fathered any children. The next leader following Kenshin, Uesugi Kagekatsu, is also an adopted son. Kagekatsu had formed a good relationship with Toyoyomi Hideyoshi, and was a member of his council of five elders. However, after being defeated in the battle of Sekigahara, Kagekatsu, like many other Daimyo, was forced to declare his allegiance to Tokugawa Ieyasu, and later fought for the new Shogunate in the Osaka campaign.

After the Sengoku period came to a close, the clan had lost a lot of it's power due to being one of the 'outsider' clans that fought against Tokugawa during Sekigahara. During the Edo period, the regions in Uesugi control experienced a stagnation of growth and were struck by famine. Eventually another adopted son, Uesugi Harunori, was given control of the clan and he managed to turn around the fortunes through new reforms, so much so he was praised by the shogunate. The clan disbanded after the Meiji restoration, though the family line still exists today. 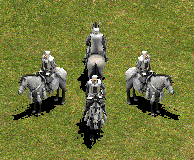 Officially named the 'Battou Kihei', the Echigo Cavalry were renowned for their long Nagamaki swords. They were very capable of strong fighting blows from horse back, and were compared to the cavalry of Alexander the Great. Their purpose was to charge enemy lines and hit behind enemy lines, even charging enemy command. They have a strong attack bonus vs archers, gunpowder units, clan leaders and Umamawari, but are relatively weak vs other cavalry and infantry. 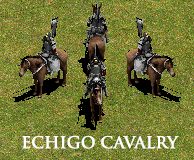 During the Sengoku period, the Uesugi clan were quite weak, especially during their battles with the Hojo. Once Uesugi Kenshin took power, the clan grew dramatically and their power was unmatched in the region; even the mighty Takeda could not defeat them. The Uesugi clan focus is on fast growth and expansion and benefit even more on water maps with their strong navy. A mostly Buddhist clan, Christianity is disabled and they lack strong gunpowder units; but they have a strong Buddhist presence and benefit from cheaper Sohei. 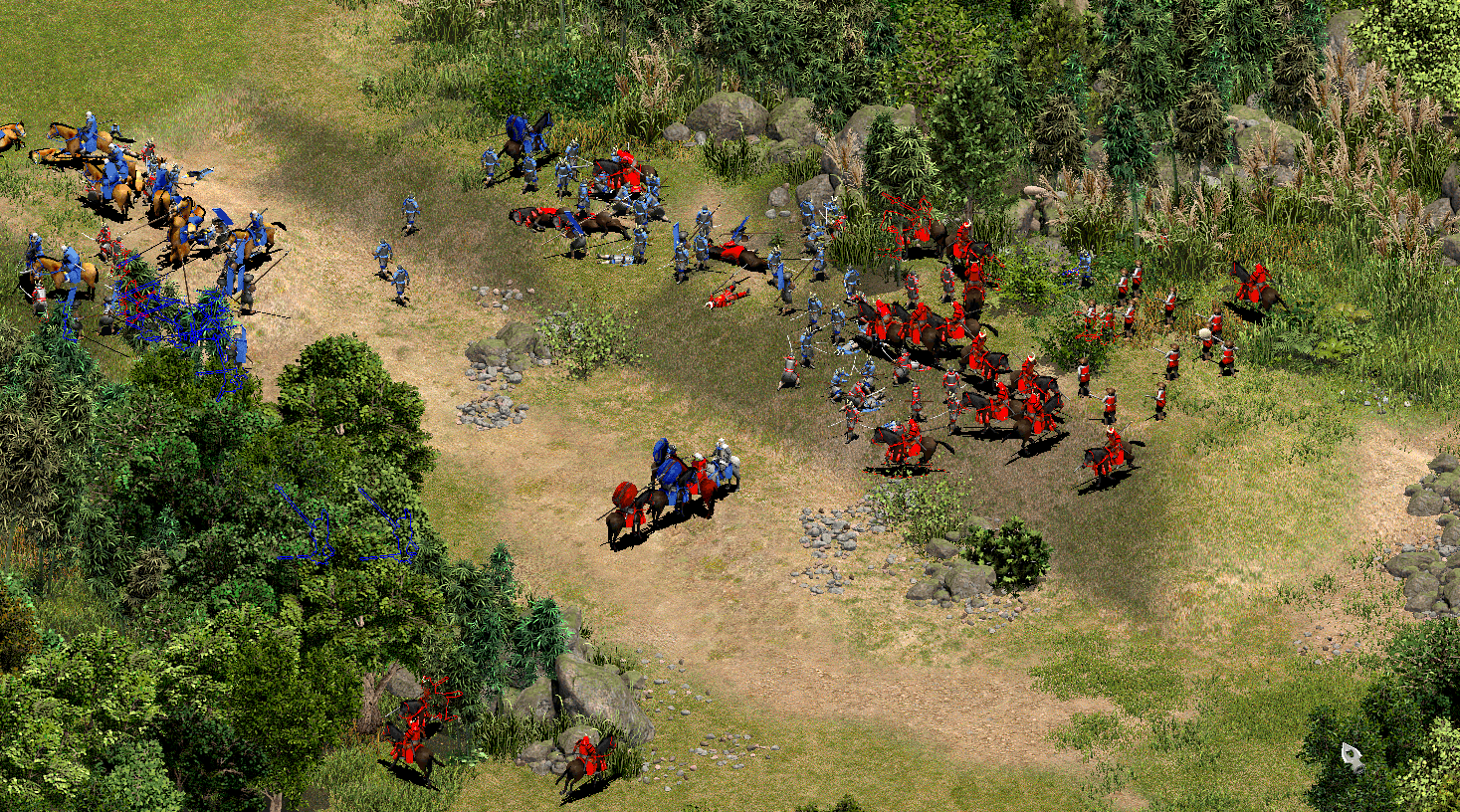 The Battle of Kawanakajima - Uesugi Kenshin himself charged Takeda Shingen in one on one combat.