Information about one of the Covenant's deadliest and toughest species.

Ah, the Jiralhanae. Ape-like creatures. Tall. Strong. Will rip you in two. Literally.

Yes, those are the Brutes for you. One of the Covenant's premiere infantry types, and also their most recent addition species-wise. Brutes, like Elites, act as shock troops, and can be seen commanding lances of Covenant infantry or acting in "packs" of their own. They are very aggressive, far more so than Sangheili, and prefer to get close and personal when in combat.

Though few of them could truly be called "tactical geniuses", they are not to be strategically underestimated - Brutes fighting alongside their packmates work with deadly efficiency. Brutes will cover areas with suppressive fire while fellow combatants advance or flank. 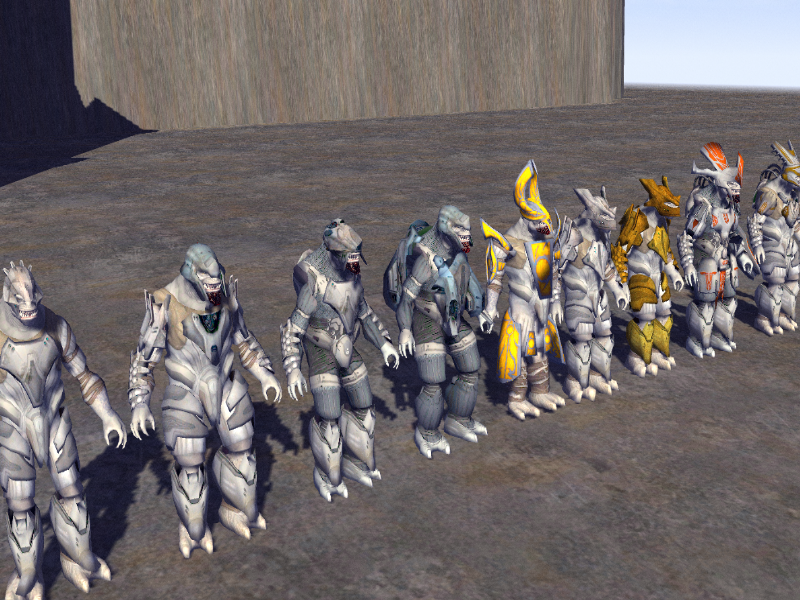 Unlike Sangheili, who have an extremely complex ranking system that has yet to be fully understood, Brutes have a relatively simple structure. For Brutes, the stronger or tougher you are, the higher your rank will be. Your role is well defined. Even the rarer specialist Brute ranks that somewhat differ are acquired in the same way (there is no evidence to suggest that Brutes are "trained" to become Stalkers or Jumpers, for example.)

Because Brutes tend to rely on a flat color scheme, many of their ranks will be very difficult to pick out in a large group. As such, be mindful. 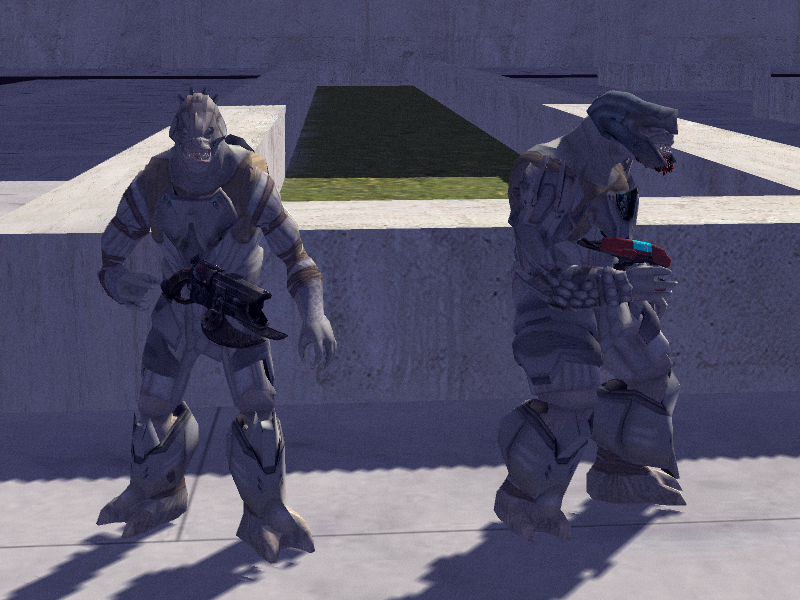 They're the lowest ranked. Minors and Majors are very low on the Brute ranking scale, but still occasionally command lances of lesser Covenant races, like Jackals or Grunts.

These Brutes are typically younger and less-seasoned combatants. However, they are still extremely dangerous. While the Minor Brutes possess little armor beyond helmets and gauntlets (and what armor they possess is fairly weak), they have tough hides and muscles that protect their vital organs well, and can easily survive several 7.62 rounds.

Majors are only tangentially more experienced than Minors, but are considerably more dangerous. They wear more armor, and have helmets that offer better protection. 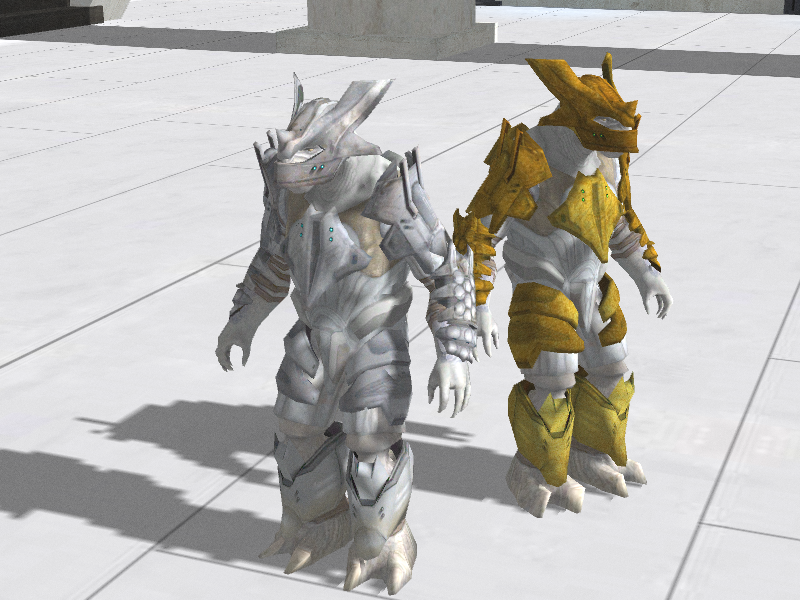 The "commanding officers" of the Brutes, these are still very common, and very deadly. Captains possess full body armor, and it's far more effective than that worn by lesser ranks. They also have a knack for heavier weapons, and will more often be seen wielding Brute Shots and Fuel Rod Guns than weaker weapons.

Typically seasoned veterans, these Brutes will usually be seen leading packs of Brutes or other Covenant species.

Captain Majors are a rarer variant seen only late in the Human-Covenant War. They wear a set of gold-colored rudimentary power armor with shielding, affording them even greater protection. Luckily, however, their armor's bright color is easy to spot even among hordes of other Brutes. Take these ones out quickly. 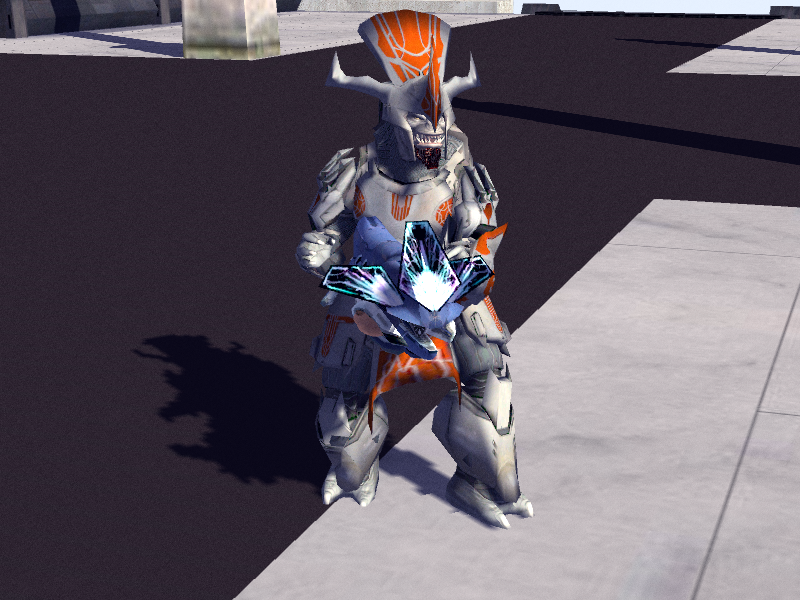 The biggest and toughest baddies. Guys that even a SPARTAN will hesitate to close in on. Chieftains are among the highest ranked Brutes, and are almost always accompanied by large groups of other Brutes, including many Stalkers and Captain Majors. Chieftains always wield heavy weaponry, favoring Fuel Rod Guns, Gravity Hammers, and even detached Plasma Cannons.

Chieftains do possess powered armor, but unlike that of Captain Majors or War Chieftains, lack passive shielding. The armor itself is focused on raw protection, and can survive several 14.5mm rounds from a Sniper Rifle without being punctured. Additionally, the armor possesses the ability to overcharge, providing a overshield that is very difficult to break while active. However, this ability has a long cooldown time, and lasts for less than a minute.

Be wary. Even alone, a Chieftain is a major threat to an entire fireteam of soldiers. And they will rarely be alone... 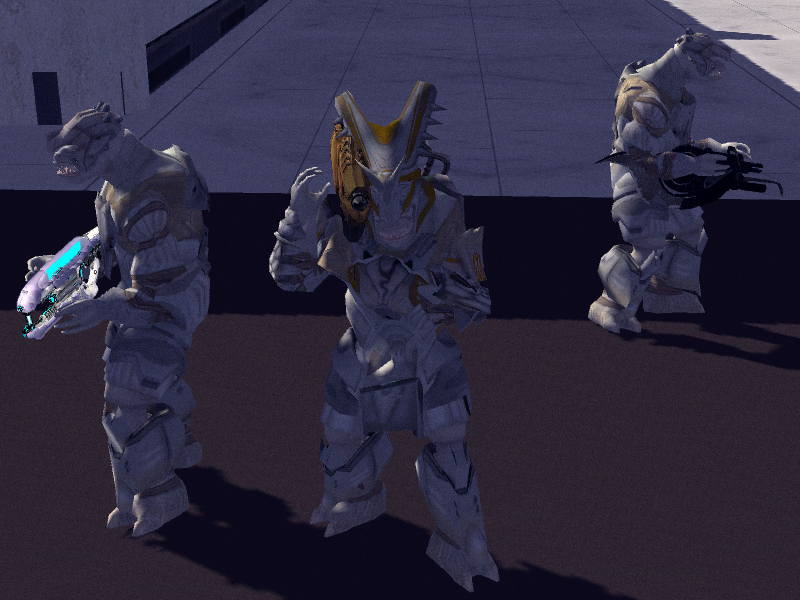 The highest ranking non-unique roles spotted, there are only a few dozen War Chieftains active at any one time. Unlike regular Chieftains, War Chieftains prefer to take an active involvement in battles, and will fight at the head of a lance or pack.

War Chieftains have lighter armor that provides less ballistic protection than a Chieftain's. However, it does provide an extremely strong passive energy shield, which more than makes up for it. As such, you'll need to focus on taking the War Chieftain down in a short period of time, unlike a regular Chieftain, who can be whittled down over time. 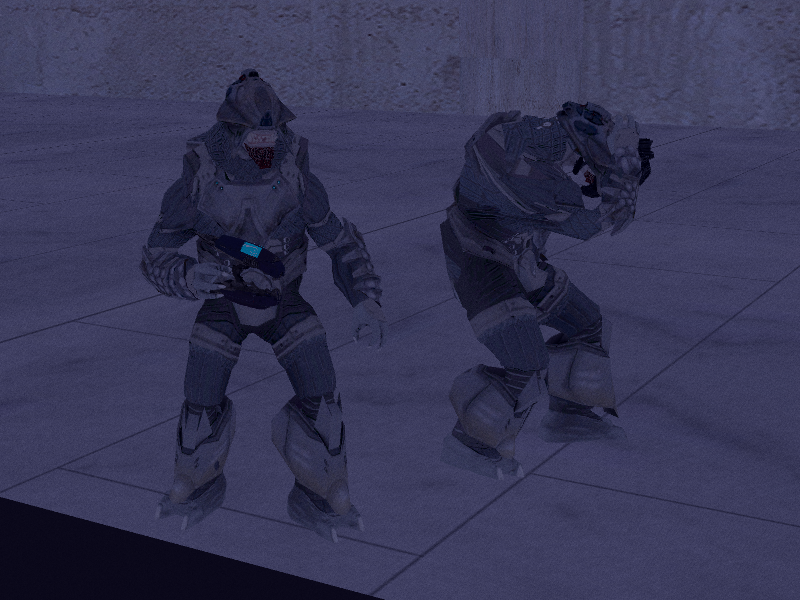 Brute Stalkers are an interesting, albeit rare variant of the Brutes. Encountered throughout the war, they became far more common during the Great Schism, likely as a replacement for the now-rebelling Sangheili Spec Ops units.

Stalkers wear a combat harness fitted with active camouflage technology, allowing them to remain cloaked essentially indefinitely. They are employed as saboteurs and infiltrators, and can be encountered at the worst of times. When in the service of a Chieftain, they act as spies and personal bodyguards. Thus, encountering a group of Stalkers may be used to indicate the nearby presence of higher ranking Brutes.

Luckily, Stalkers are rarely seen using heavy weapons, typically preferring those that they can wield with one hand (Plasma Rifles, Spikers, Maulers, etc.) Additionally, they wear relatively little armor, and can be brought down rather quickly when revealed. 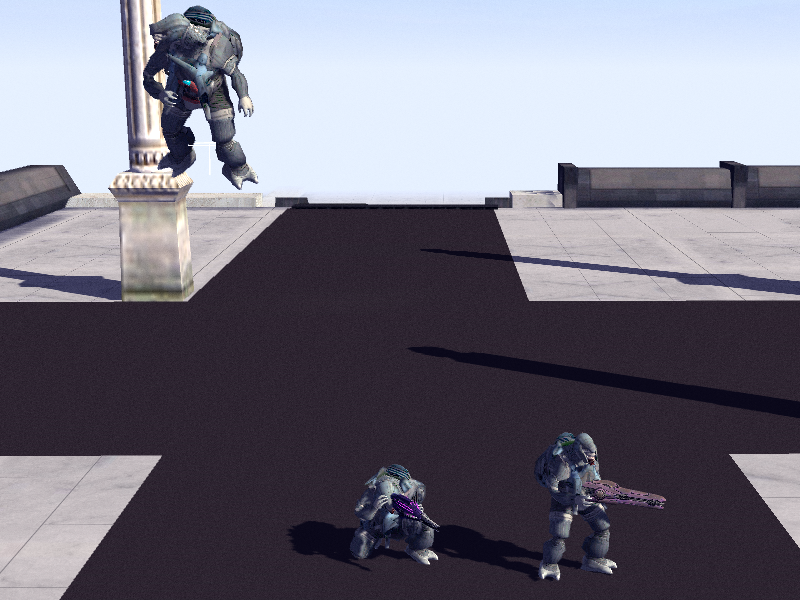 Also known as Jumpers, these guys are a little bit more common than Stalkers, but are still a relative rarity on the battlefield.

As their name suggests, Brute Jumpers are equipped with Jump Packs, allowing them to leap in the air and cover large distances. Like Stalkers, they find use as recon units, using their Jump Packs to access raised or concealed positions. When in open combat, they can be used as fast shock troops, quickly covering ground, or retreating to an advantageous position.

Unlike Stalkers, who operate alone or in small groups, Jumpers can usually be found in rather large ones. They employ a mix of short, medium, and long-ranged weapons, in order to gain full control over any possible combat situation. If Stalkers are the "quiet scouts", then Jumpers are the "loud scouts."

These guys are pretty easy to kill like Stalkers, and wear little protective armor. Their Jump Pack can also be disabled by a few well-placed bullets, if you're a good enough shot. 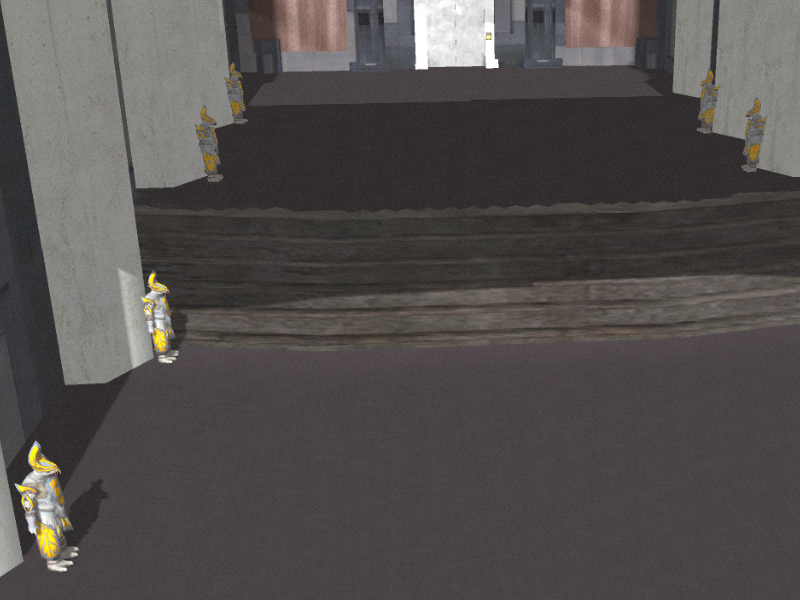 These rare Brute types were only encountered very late in the war, during the Great Schism, which they were probably both a cause and effect of.

Brute Honor Guards replaced their Sangheili counterparts relatively quickly during the war's last months. Most of them operated on High Charity, and were consumed by the Flood as it overwhelmed the station. That combined with their general function meant that they were never really encountered by UNSC troops.

However, in the untimely event you do run across these mofos, be wary. Their armor is purely ceremonial, and offers them no real protection. However, they are among the most skilled Brutes, having been hand-picked by the Prophets like the Elites of old. And they always come in very, very big groups.

If you're fighting them, though, you're already pretty close to the Prophets themselves. So you're probably capable of handling yourself.

For now, the Brutes are pretty much complete. I may add more variants in the future, but this is sufficient for now, and probably will be for awhile. There are nine skins (technically eighteen if you count one-handed and two-handed variants of each) covering practically every major type.

Jump Pack and Stalker variants don't actually have flight or active camo right now, but will by the time the mod comes out.

I don't have working Gravity Hammers, and probably won't. Hammer wielding Brute Chieftains are a question for the WC team, not me.

How do you join the dev team , I really want to help any advice on how I can go about joining the dev team?