Join some of the designers behind the Emergence update as we break down the new Legend, Weapon, Map Updates, Ranked Arenas, and more!

Join some of the designers behind the Emergence update as we break down the new Legend, Weapon, Map Updates, Ranked Arenas, and more!

With microdrones and an artist's eye, Seer spots opportunities that other Legends might miss and seizes them in the most beautiful way he can. Check out his kit in action below.

Passive - Heart Seeker
Visualize and hear the heartbeats of nearby enemies when aiming down sights to get a clue to their location. Seer is able to “ADS” even while not holding a weapon.

Tactical - Focus of Attention
Summon microdrones to emit a focused, delayed blast that goes through walls, revealing enemies (and their health bars!), plus interrupting their actions.

Ultimate - Exhibit
Create a sphere of microdrones that reveal the footsteps of enemies moving quickly or firing their weapons within. 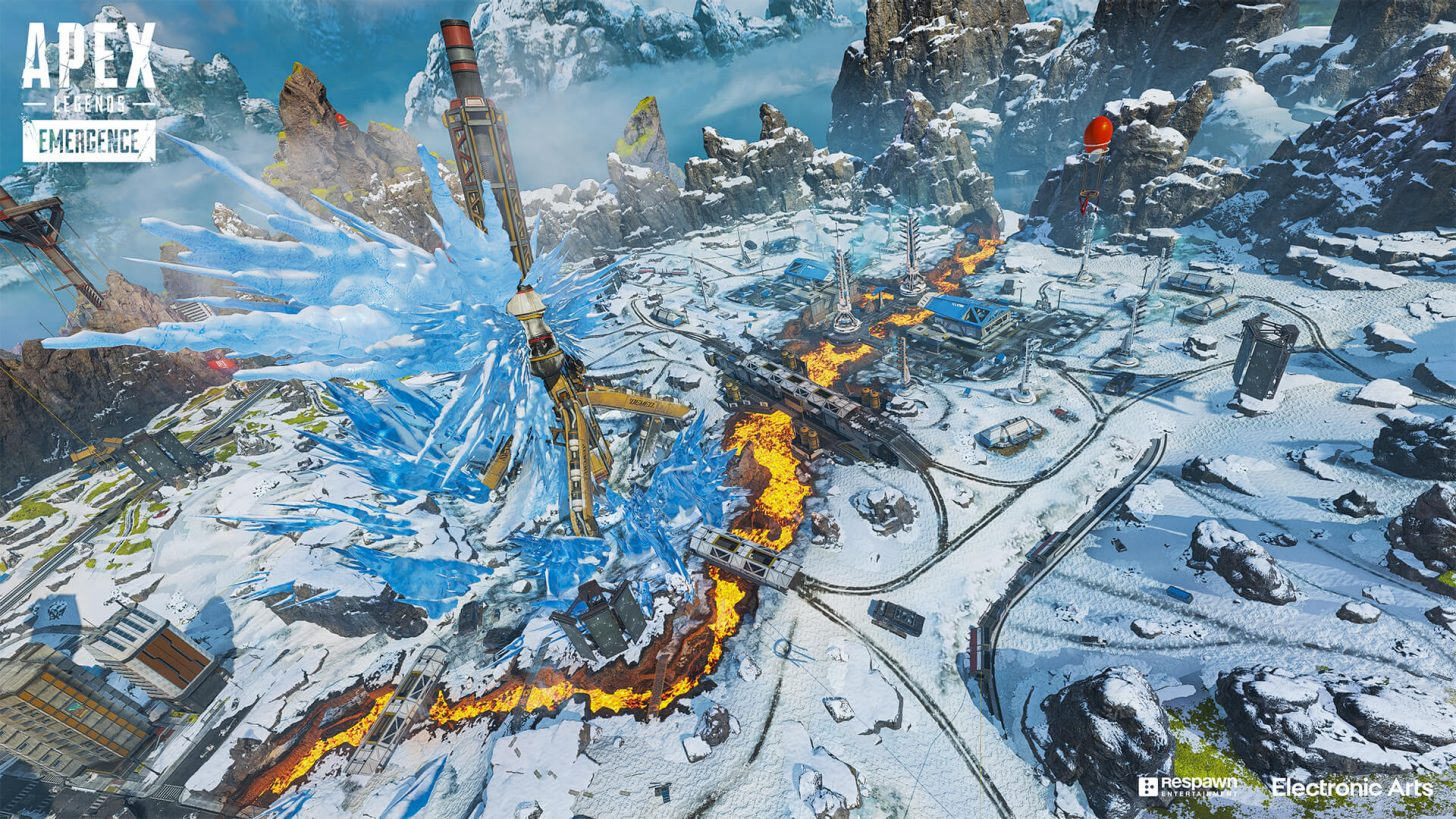 After months of aggressive mining by the Harvester on World's Edge, the land is overmined, overburdened, and pushed to its limit. The earth has fractured and erupted as nature is reclaiming what’s hers. Hammond is scrambling to contain the damage they’ve caused using weather-controlling machines: the Climatizer rapidly cools the surrounding area to subzero temperatures, and a Lava Siphon stabilizes the caldera. Fight for control of the always-moving gondolas in Climatizer and Lava Siphon, traverse the bubbling hot lava with caution, and show everyone what Legends are made of!

Read more on the map changes in this blog post. 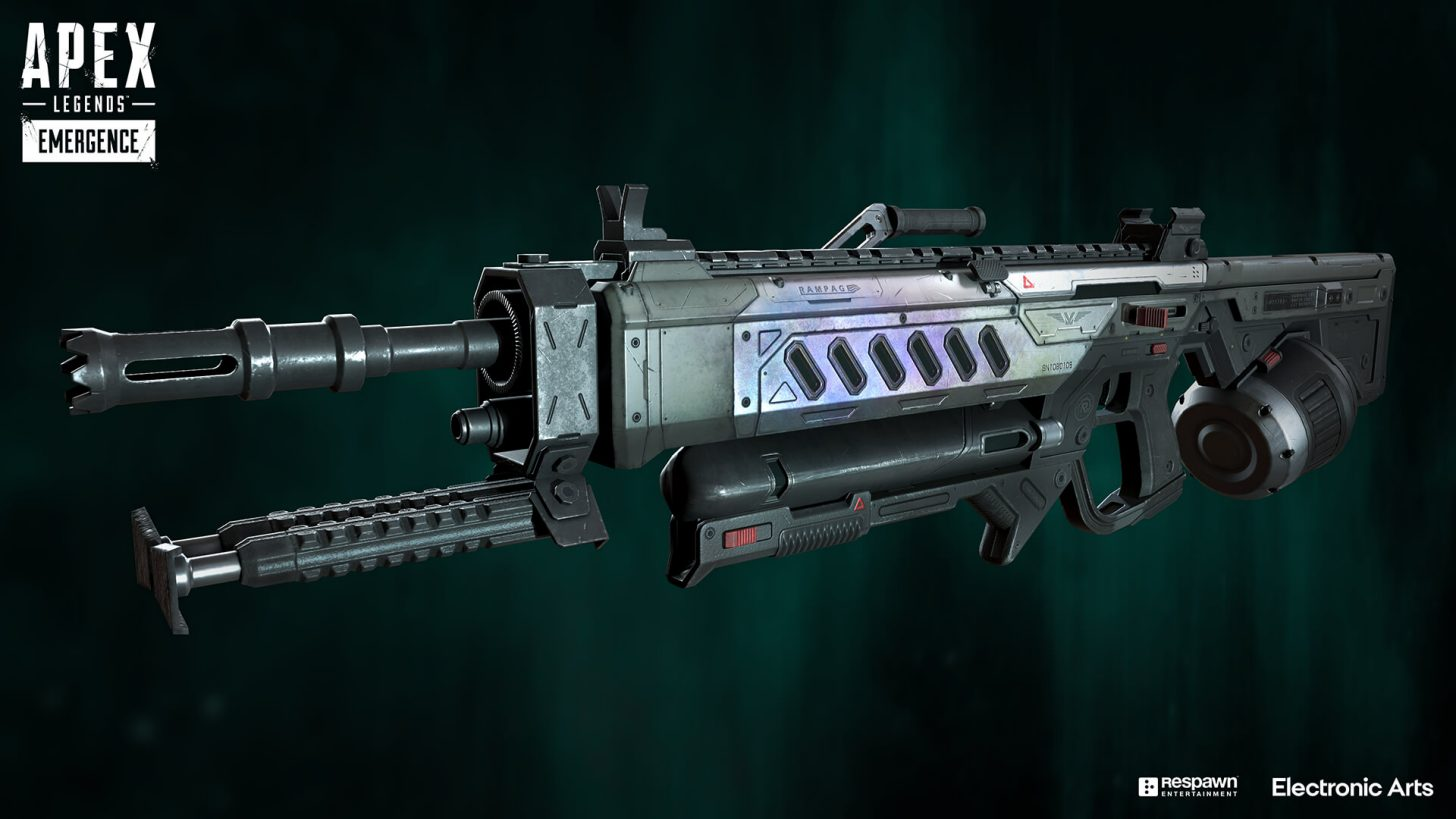 Rampart’s latest creation, the Rampage LMG, blasts onto the scene and has absolutely no chill. This high-powered heavy ammo LMG takes its time but packs one hell of a punch. The Rampage excels at mid-range combat but struggles up close with a slower fire rate. Not one for just accepting weakness, Rampart managed to modify the Rampage’s internal combustion mechanism with, what else? Thermite! Loading a thermite grenade into the Rampage’s special chamber overclocks the fire rate and lets Legends go on a, well... rampage! 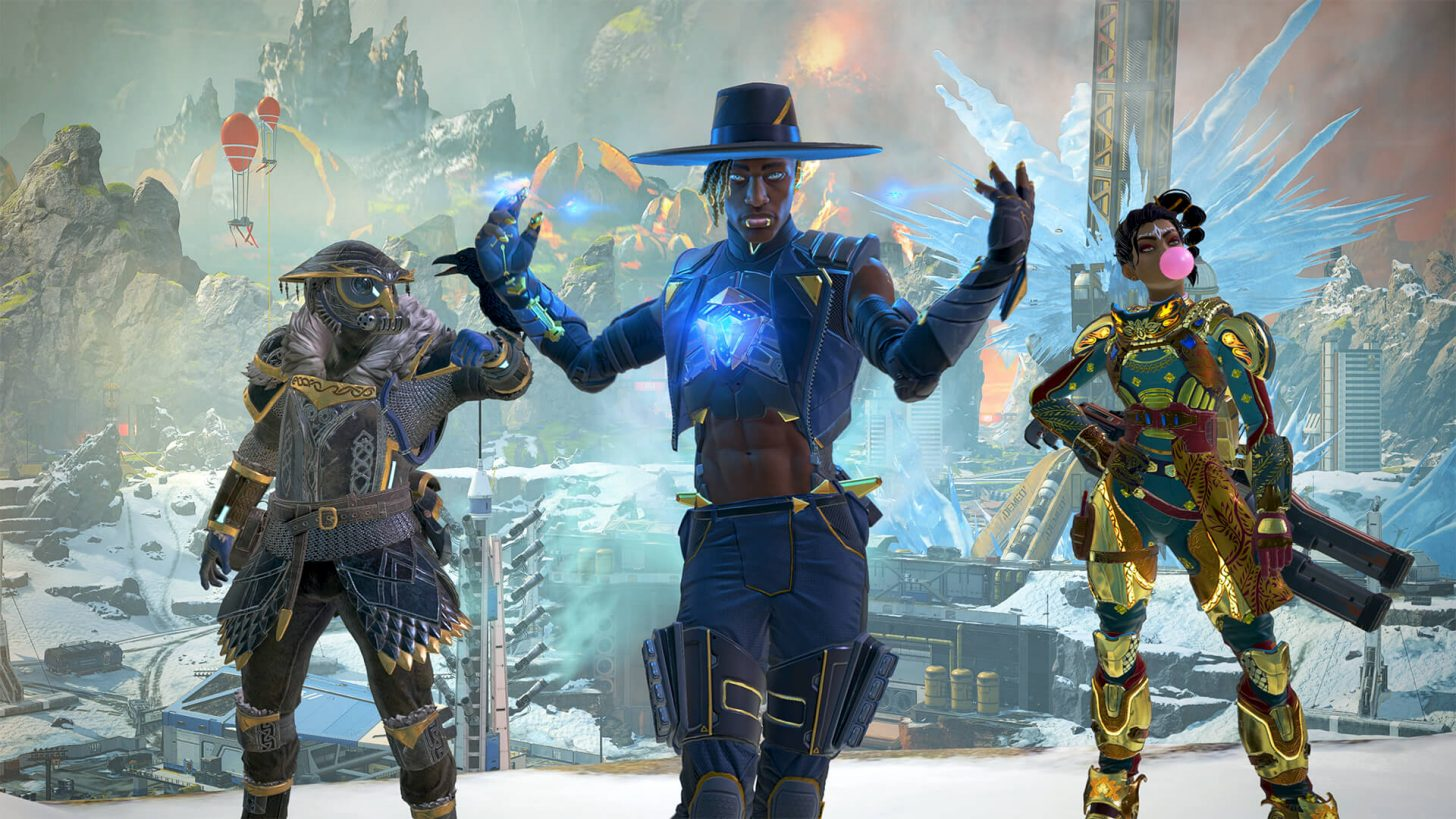 With the launch of the Emergence update, we’re introducing Ranked Arenas! You begin your journey through Ranked Arenas in 10 placement matches where your performance will determine your initial Match Marking Rank (MMR) and your starting rank. MMR variance is wider initially, so your first 10 matches might be stomp-or-get-stomped until your MMR defines your placement.

Arenas is a head-to-head fight between two teams of three, so awarding Ranked Arenas Points is more cut-and-dry than in the 20 team Battle Royale. This means there is no entry cost and no AP for kills. Everything comes down to getting the win.

That’s just the high level of how ranked arenas work. To learn more details on how Ranked Arenas will work check out our blog here. 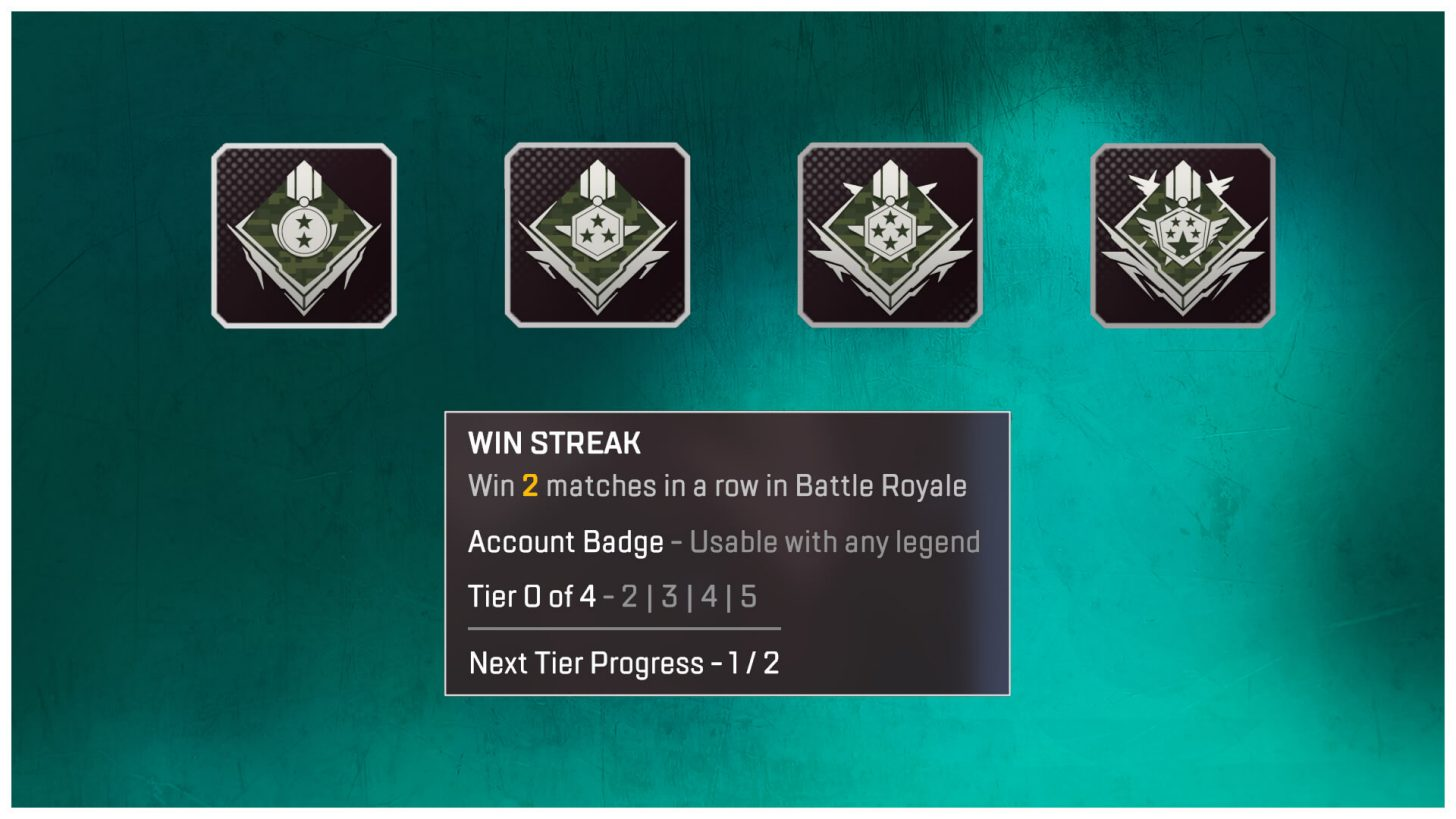 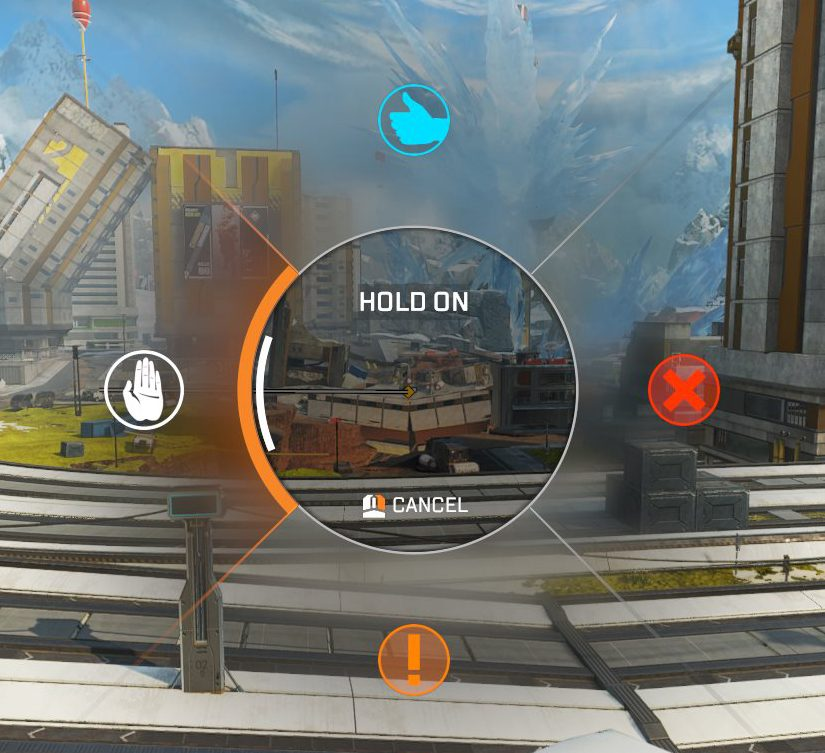 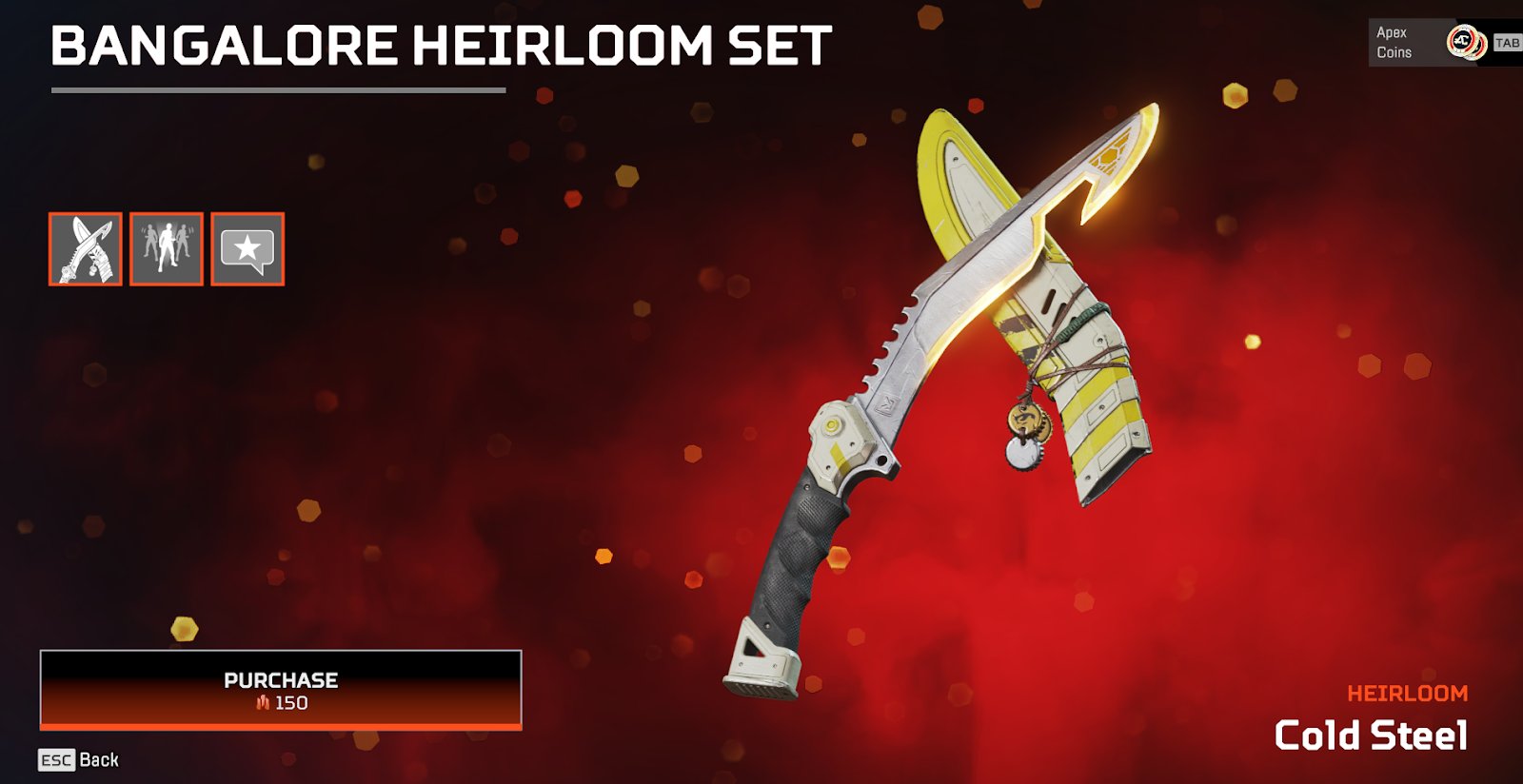 Dev Note: Fuse continues to struggle. We identified two opportunities to help him that weren't just "give him more damage.” We believe Apex is a gun game first and foremost and therefore want to make sure we don't put too much damage into character abilities.

The first opportunity we identified was his tactical. While meant as a persistent area denial tool, it currently does not last long enough to seriously inconvenience an enemy. We doubled the duration so you can now place one at a door and be reasonably sure no one's coming through that door for a little while. While we doubled the duration, the damage per second remains the same. Please don’t stand in the fire.

Secondly, his ultimate often didn't give his team an advantage; sure, you may catch enemies within it, but the flames made it impossible for you to step inside, and you couldn't see the enemies you trapped either because the flames were in the way. We explored a few ways to deal with this but ended up going for the most straight-forward answer: you get enemy outlines as long as they stay inside the ring of fire.

Dev note: There’s no doubt the nerfs Horizon received with Legacy were necessary, but given the benefit of time and hindsight we decided we probably hit the speed of her tactical too hard. Instead of completely reverting that part of the nerf, we found a happy medium between how fast her gravity lift operated at release and how slow it was after the nerf. This one's hard to communicate with numbers, so just give her a try and tell us what you think.

Caustic is a dangerous character to buff. Push him a little too far, and he quickly takes over the meta. Constantly fighting through gas is no fun, so we definitely want to avoid him becoming dominant once more. That said, we're now convinced the nerf that dropped his gas damage to a flat 5 damage went too far. When you can sit in gas and take a syringe or two and be fine, gas is not a scary enough deterrent. So we switched back to a scaling model. This time we decided to let the damage scale a little more slowly. Instead of going up by one every tick, we're increasing it by one every other tick. Damage is uncapped at the top here, but really that's very theoretical. Enemies will generally be dead around the time the gas reaches 11 damage per tick (unless you've been healing). The desired effect here is to make enemies feel a great urgency to leave the gas as soon as possible.

At the same time, we wanted to be mindful specifically of Caustic's impact in late game circles at the highest level. Even with Ring 6 now slowly closing over 100 seconds, we were worried about the effect that a single Caustic ult could have in the late game. We reduced its duration by 5 seconds. The ult represents Caustic's highest moment of power; his enemies have no way of countering it. 15 seconds is still a meaningful amount of time (and with the damage changes, 15s is long enough to kill someone) but it should hopefully make fighting a Caustic in the end game slightly less frustrating. 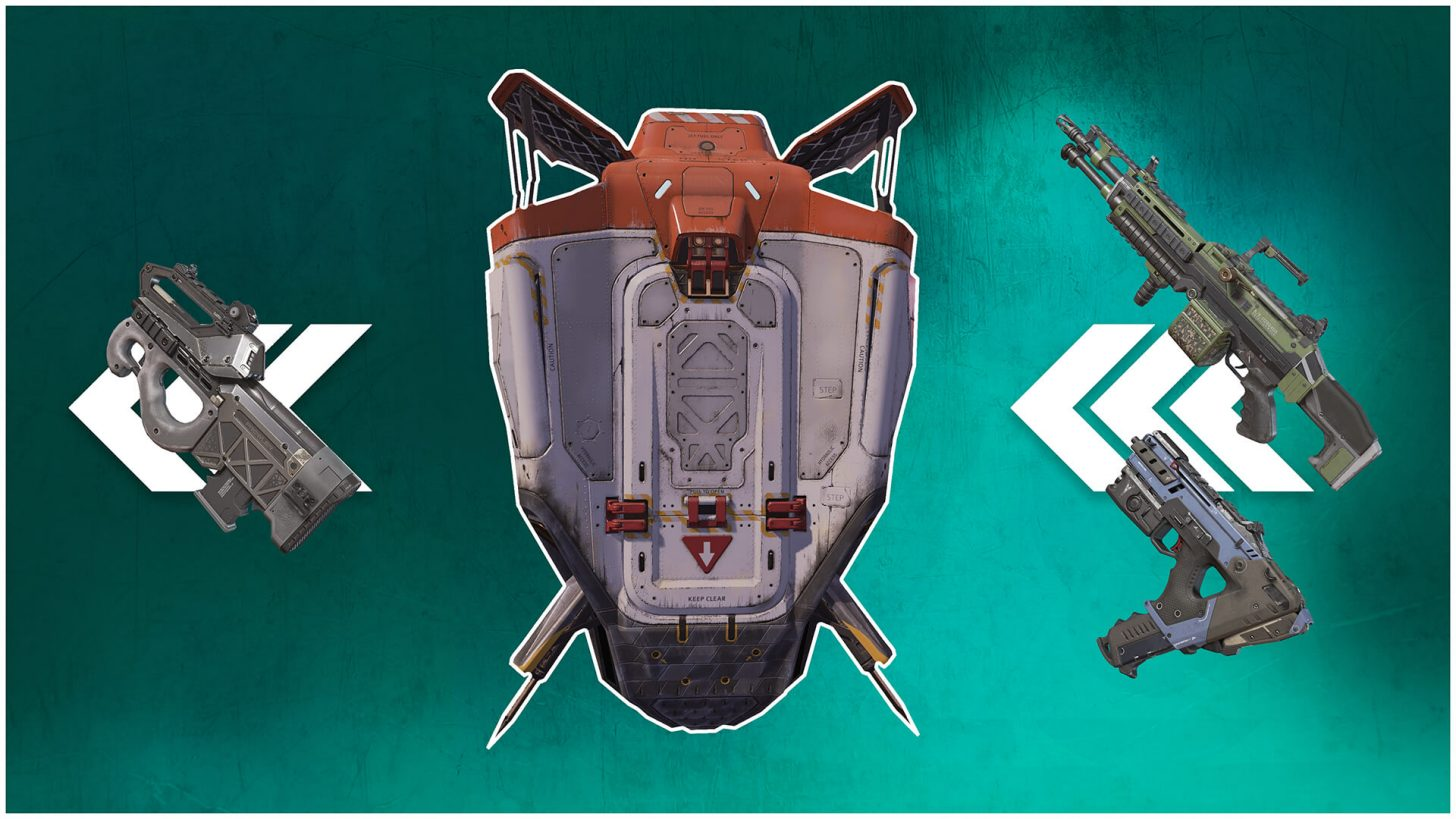 This season the Prowler returns to floor loot and taking its place is the M600 Spitfire. In addition to the Spitfire this season another weapon will be joining the supply drop: the Alternator SMG. See how each weapon changes down below. 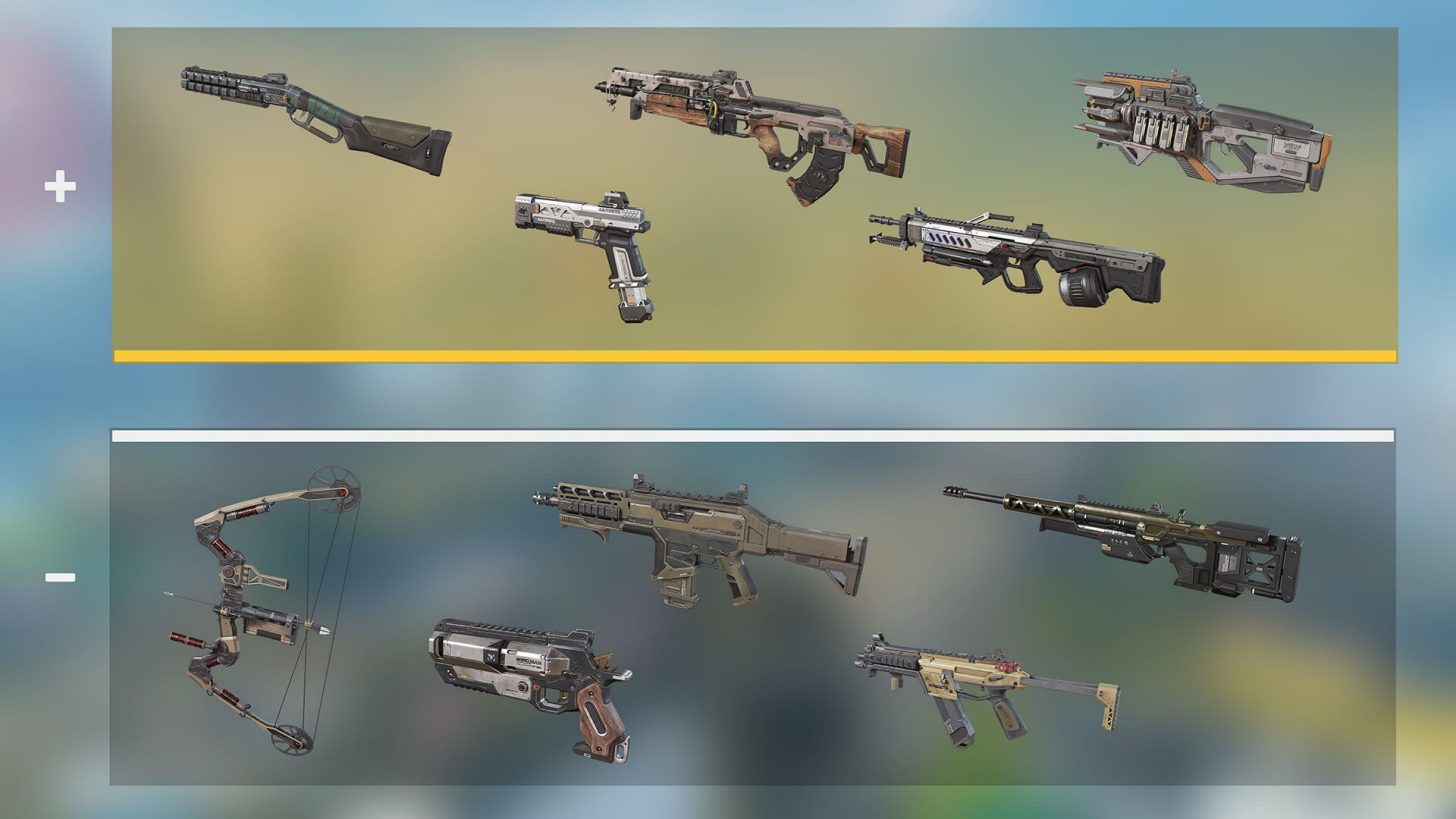 Magazines are the most potent source of lootable power for most weapons and that largely comes in the form of ammo capacity. In addition to capacity, they were also offering increased reload speed. We’ve moved the reload speed buff to stocks to help increase the value of stocks and spread out our meaningful modifiers across our attachments.

Sniper stocks are an often lonely attachment left sitting on the floor waiting for a crackshot legend to come along and give them some love. Instead of reducing the spawn rates to try and clean up the loot pool we’re putting them on Marksman Rifles to make them more desirable.

The L-STAR has undergone a few changes in Emergence. We’ve attempted to improve the looting experience and extend the L-STAR’s power into the later phases of the game. In addition to these attachment additions the L-STAR is also seeing some VFX changes for combat readability.

LMG spray-and-pray was feeling a little too oppressive when random headshots chunked with a 2.0 damage modifier. We’re shaving off some of that headshot firepower but adding a little back in by bringing up their limb damage. Unloading massive LMG mags to suppress your enemies should still be a valid tactic, we’re just reigning in the peaks and valleys to make it feel a bit more consistent.

With the removal of the Quickdraw Holster and reload speed moving from mags to stocks Pistols took a bit of a hit. We’re increasing their base handling but will keep an eye on their performance as we get into Emergence.

The Prowler returns to the floor without its trusty side-kick the Select Fire hop up. But don’t sleep on it, it's still a beast.

We’ve all woken up with a cold sweat in the middle of the night from a nightmare where Rampart with two gold mag spittys chases you on the World’s Edge train tracks laughing maniacally as she shoots for eternity, right? … right? Well for those of us that have, we’ll be able to sleep soundly for a while. The Spitfire takes its rightful place as a Supply Drop weapon this season. We’ve hit it a few times in recent patches and we still want it to be a desirable Supply Drop weapon so we’re walking back those nerfs while making it much harder to access.

The Alternator joins the Spitfire in the Supply Drop with its old friend the Disruptor Rounds. The shield damage has come down since we last saw Disruptors in Season 2, but it’s still a shield shredding monster. Pack an extra bat.

The 30-30 can slap, but when it's not slapping it’s probably reloading. We’re buffing the 30-30’s bonus to reload speed from stocks to help alleviate one of the sharper pain points when running this heavy rifle.

The EVA-8’s speed makes it a forgiving and formidable shotgun to run. It’s pulled ahead of the pack and has been seen as the clear choice for many leaving the Peacekeeper, Mastiff, and Mozambique in the dust. This change should help even the playing field between the shotguns.