Depth gets fishies! and we discuss the lobby system in the game.

You know, it's been a while so let's start things off with a bang ...


Depth now has a fully functional sea life system! As you can see from the video we've already fleshed out the roster with some strange and wonderful fellows including jellyfish and manta rays.

The purpose of sea life in Depth is two fold.
One: They look pretty sweet swimming around and add a lot of life to our maps.
Two: These creatures will actively participate in Depth's gameplay.

Jellyfish are dangerous to both sharks and divers for example. Swimming in to a pack of them is not advised! Other creatures like small schools of pilotfish make an excellent food source for shark players. Sharks who feed on these sea creatures will gain temporary bonuses to their senses. From a diver's perspective a school of fish is a great opportunity to confuse prowling sharks. Fire a spear into the school and they will scatter and set off a cavalcade of sonic pings that will confuse and bewilder nearby sharks allowing you to slip by unnoticed.

From a developer's perspective, these creatures are incredible flexible. A mapper has only to place a "Squad" info somewhere in his map (represented by the three very happy little fish) and select which type of creature he would like to spawn from the drop down menu in the info's properties. Designers can also tailor the behavior of each squad to suit the situation. 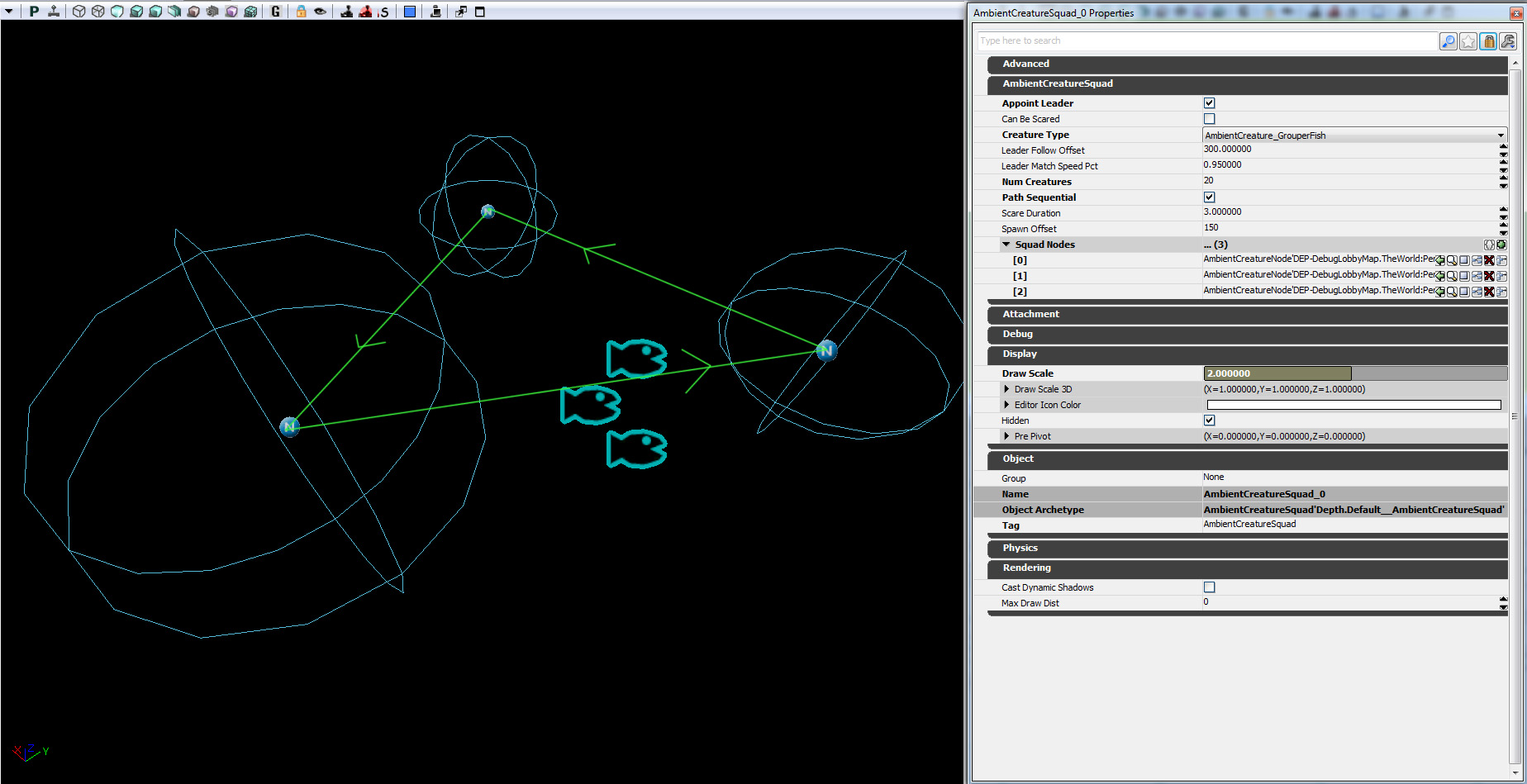 Many multiplayer games have "lobby menus" where you can chat with your friends and hang out until everyone is ready to start the game. In games like Left 4 Dead and Killing Floor for example, these are simply 2D graphical menus with various check boxes and text fields so you can communicate and indicate that you are ready to start.

In Depth, the lobby menu is in the game itself. When you join a server you will pick your team and then be plunked down on a boat if you selected Diver, or dumped into a deep sea grotto if you chose shark. When the teams are balanced the divers can enter the dive cage on the back end of the boat to indicate that they are ready and the cage will drop. When the cage touches down at the bottom and opens, the hunt is on. So what are sharks doing during all of this, you might wonder. Well, their grottos are stocked full of juicy fish and other delicious sea creatures, so while the divers are hanging out waiting for the last player to finish making his sandwich, the sharks will be honing their hunting skills and boosting up their senses for the coming hunt.

In respect of the fact that some players just like to make life difficult for others and might not get in the cage at all, we have coded a timeout system into the lobby which teleports errant divers into the cage if the majority of the team is already in and waiting. Furthermore, if the entire team of divers gets cold feet, the timeout will begin as well, ensuring that the sharks won't have to wait long for fresh meat :).

That's it for now! Be sure to join our forums and speak your mind about our latest media! Forums.depthgame.com we've recently started posting additional media on the forums that is only visible to registered members, so now would be a great time to join our little community :).

As always, watch where you swim.

Love the concept, and the visuals look beautiful so far. Great work :)

I really like this ingame lobby concept. It's got a lot of potential to make the game a lot more immersive and atmospheric.

More amazing news from you guys! The 3D lobby system sounds pretty rad, I've seen it implemented in some mods, but quite poorly (I.e. walking into a wall to choose your team, pretty boring).

Keep up the great work, can't wait for a release

I need you guys to make an under sea screen saves... looks brilliant.. nice work.. the black under the wings of the manta, glitch? as they don't have gills at the wing joint... other than that, the fish and animation/movement is very well done...

The black spot on the underside of the wings is actually the top of the manta's wing clipping through. All the creatures use procedural animation instead of keyframed stuff. I'd say one of the bone oscillators on the manta's wing is flapping abit too hard :)

looks cool, would be fun if you had some variations for lobby like a cave and such :D

Now what stops the sharks waiting where the cage drops?

The exit to the shark grotto has a strong water current travelling against it. When the cage drops the direction of the current conveniently changes ;)

The grotto is always located on the oppposite end of the map from where the cage drops.

This is really...outstanding! Great idea and awesome visuals!

This is going to be such an amazing game

This is different. I wonder how you guys made the sea life and such cool stuff?

Nice one guys - you're doing some really good stuff with this - i can't wait to see all this in action. :)

Been a fairly avid freediver - this is pretty darn good.

However schools of fishes really dont swim around and move that much. They usually just sit there in a pack and cruise and if you goto swim through them they just make a gap for you to swim though. Very synchronized too, no erratic movements at all.

Looks pretty good it's going to be amazing

Fine update. Beautiful work and some fine thoughts put into the lobby system.

There are too many Mantas and too few swarm fish. It doesn't have to be a realistic game, however seeing so many Mantas in one place can only mean they are mating. It's beautiful to look at though, just a bit cramped.

I like how you use a lot of the fish to confuse or evade the sharks. Sorta environmental bio-weapons...hah