In this SCUD Storm update we have the release of 1.2, what has changed since 1.1, what's been added and the FDS!

SCUD Storm version 1.2 is finally here! After a lot of work, changes, new stuff being modelled and a new gametype going in we are finally able to release this to the public!

1.2 is at last here with us and with a load of stuff new, changed and balanced. Here is the change log so you can all see what's new!

-added MiniMap of C&C_Confrontation
-fixed that you could enter your PT from both Base Zones
-modified "Attack Icon" displayed in Aircrafts for better visibility of your current Bulletcount
-added Reload & Heal Zones to Airfields so Aircrafts can Reload there and get healed. Healing is 10% per 3 seconds while Reloading is 1 Ammo per 3 seconds.
-due to the new Heal & Reload Zones the Bug where Aircrafts reload after Exit and Re-Enter them is now fixed.
-due to the shaders fix in 1.1 the wireframe technique for Building Dummies is no longer possible. Building Dummy Materials are now setup as Screens so they become a Ghost-like look.
-Added 5 Oil Derricks to C&C_Confrontation.
-Re-Enabled CTO(Capture The Oil)-Mode known from the old Version
-fixed that PT-access didn't work after Character change
-fixed that you lost your Flag on any Weapon changes (promotion, Strategy change ...)
-added the new Raptor Model with a simple basic Texture made by LR01 for the USA None General
-added Deploy/Undeploy Icons for the Outpost and switched from Q-Key to Upgrade_1 Key to link it to the Icon
-fixed the Promotion Progress Bar that indicates how far the next Promotion is away.
-added PowerBar to the HUD (on the left to the Radar and only visible for the TeamCommander) which indicates the available Power. This changes color to yellow as soon as the half capacity of 1 PowerPlant is left, changes to red as soon as available Power goes lower than 30% of 1 PowerPlant.
-added Team Credits to the HUD (underneath the Team Upgrade Bar and only visible for the TeamCommander)
-added queued Team Info Messages
-added HUD adjustment to make the HUD fit any Screen Resolution
-fixed HUD Team switch to show the correct HUD for each Team (i.e. after Team change the HUD didn't change so you could have had the USA HUD as China)
-added Map 'C&C_Dust_Devil' made by TeamWolf + MiniMap
-increased DrawDistance from 300->800
-enabled TechTree for Team Upgrades. Team Upgrades are now only buyable when their Building exists(i.e. Barracks is needed for Capture Buildings Upgrade)
-fixed the "invisible Body"-Bug of the Chinese Tank Hunter

We've also put together an FDS for those of you wishing to host a SCUD server! All you need to do is run the install and then you're good to go.

Something many of you will remember about the old SCUD Storm are the Tech Oil Derricks that were around the maps and you could capture them to boost your team's econermy. We've now brought this back but as a cool new gametype!

Basicly capturing Oil Derricks is always possible as soon as the 'Capture Buildings'-Upgrade was bought by the TeamCommander. After an Oil Derrick is captured by a Team it produces 200$ each 60 seconds for each Team Player and for Team Credits (used for Upgrades and Buildings...). Only the standard Infantry holds a Flag and is able to capture Buildings (Ranger for USA and Red Guard for China) the only exception is Black Lotus for China. Right now she also gets a Flag with the 'Capture Buildings'-Upgrade. The CTO-Mode can be activated by the Host at 'Victory Conditions'-Screen which means that a Team that holds all Oil Derricks wins the Game. The Capture Flag is now assigned to 'Upgrade_4 Key' and is only available when the upgrade was bought (of course) and the Player is NOT inside a Vehicle. After a Flag was used it has to reload 45 seconds which counts down on the Upgrade_4 Icon.

As seen in the bottom left hand side of the HUD. 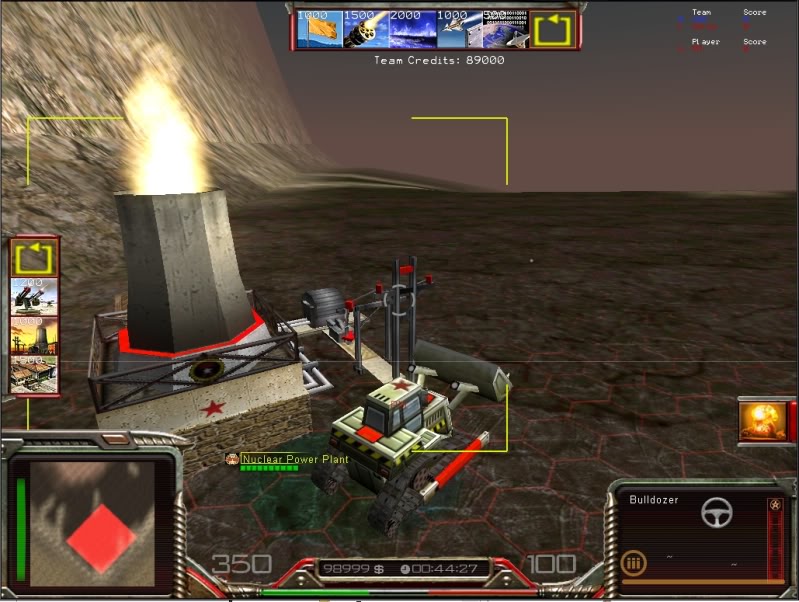 We are looking for modellers, texture artists and infantry modellers. So if you are interested then please post here on our forums stating why you'd like to join the team, some recent work to show off and contact details. <!--IBF.ATTACHMENT_7933-->

the low poly stuff is killing the game. is graphic quality.

yes if u dont know the vehicles and building used in this mod are ripped from EA'S C&C generals. thats y thay are low poly and look like S***. thay need new models new textures.

and FYI the renegade engine can hande really high poly models. these models dont even compare to what reneagde can run.

i did a test a few years back and hade a vehicle model with over 1 milion pollys ingame rigged and working. and u know what the reneagde engine didnt even crash or lag. so what does that half to say for these models. these models would be lucky if thay hade over 500-1000 polys each. thats such a shame.

do u want to say that you will make some finished models for us? we would be very happy about that really.
i got a list of things that have to be (re-)done...

Haha brilliant one E! :D. Yes please STFU complaining about low poly models if you're not willing to help change them.

If you visit our forums you'd see in our blogs (some weren't posted here) that we are remaking everything and have been for the least year or so. The game was first released with these models and at the moment they will do as placeholders.

i like the mod but dose anyone play it over hamachi?

Generals Fan Group Other with 9 members