The majority of gamers have their blinders on, always looking towards the next upcoming releases. Coverage across games is the same, the only time a look back seems warranted is when a new update to a franchise is imminent. In the case of indie games however, there's always a boatload of gamers out that have yet to become aware a lot of indie games exist. Savage 2 is one of those titles. Brought to you by the same developers that put together its IGF (among others) award-winning predecessor, the game has received numerous updates. After a tumultuous launch, Savage 2 obtained a small but dedicated following. Thanks to continued developer support though, the game underwent many changes that have resulted in the solid experience people are still discovering over year since its release. Here's the kicker, the game can be enjoyed for free.

ModDB is proud to present this coverage of Savage 2: A Tortured Soul to in hopes of exposing as many players as possible to it. Over the next coming days, we'll dole out features that showcase the depth of strategy and tactics straight from the developers. By the end, we hope you'll try out the game for yourself and discover just how much of a genre-bending, action-packed romp it really is.

To help new players cope with the plethora of units and abilities available to them in-game, we've compiled a video primer guide for both the Legion of Man, the Beast Horde, as well as the demonic Hellbourne units. 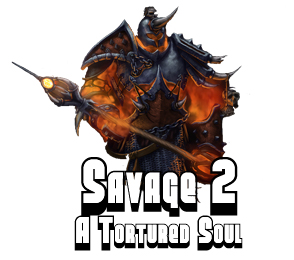 Great game with best combat syste out there. Not a cheap game with cash shop. One time payment for 10 bucks for premium and thats if you WANT. I like the small community now because theres no hackers.

Exactly what wav said. Best game out there. Not some money eater and I do wish the community does't get to large. Otherwise the game will be infested with hackers.

Let 'em come! By the time hackers have arrived in any worrying amount we'd have enough new players coming in to add additional support for the game - both to stamp out the hackers AND add more content.

Not video here yet ? Too Bad !

I'm not sure I'm following you. Did you mean new video? There should be at least a couple of new ones before the event ends.

It is a fantastic game, though crashing does occur sometimes.

occurs on every second loading on seven for me.

There's a memory issue that we'll likely be able to clean up in the next patch - it occurs on systems with a lot of ram who run Savage 2 with the graphics settings turned up (particularly high texture detail), usually every so many map loads.

I redownloaded and gave the game another go... there may be countless improvements to the engine, but the worst part about the game still exists -- the playerbase. Out of the handful of matches I tried, every one ended with a stacked team and utter humiliating defeat, complete with players constantly bitching about how their team sucks. Not very fun. This is really more of a problem with public servers I suppose, but this is what the game looks like to a casual player. Maybe it was a bad time of day, /shrug

What you've described is in large part the growing pains of having a smaller community, and that sort of thing is much more rare now than it was at the release. I've been working on plans to improve how teams are balanced, but I haven't yet had the time to implement them.

Damn I played the tutorial and practice mode, and it looks very interesting, something I really would like to play online.
BUT... I'm have 'the NVIDIA driver issue' with this game :( Which probably means: a mess on my screen every 5 minutes and then a freeze.
Still gonna try to play this game online though.. I really hope it doesn't crash too much :/

What nvidia driver issue are you referring to?

I loved the game, played the first one, it was great, this one is an improvement. I would like to see more focus on the team play aspect. With the capabilities for creating your own squad without having the commander choose for you and the capability to switch teams so you can get on the same side with your buddies or clan mates. I also think the class could use some balance, i don think the scout units should be able to easily take on a Savage/Hunter unit, i started playing as scout a lot and it was ridiculous how easy it is to take out the bigger unit. Hell i was evening kicking but with the builder unit as well, and i found it very funny. So i do think there needs to be some balance with the different class types.

This a more personal thing, but my main draw to the game is the sword fighting, having the guns i think takes away from that a bit. I think sticking with strictly swords and bows would be fine, guns seem off, like they dont really fit.

But overall, i love the combat, its very well done and the idea of a FPS/RTS game is something i always remembering thinking would be awesome back int eh Q2 days, so i was glade when the initial Savage came out a while back and i was glade to see that the developers didnt let such a great idea die and continued with it with Savage 2. So ill be looking for a new addition in the future, maybe with a little more focus on teamwork and team with a perfect squad and commander system.

Cool, glad you like it!
Have you purchased a Prime account ($9.99)?
I just want to clarify that the Collector's Edition is a Hard copy of the game, old(er) strategy guide & 5(?) scratch off tickets.....& this is FREE (you just pay S/H) but DOESN'T include the prime account.
(If I'm wrong, I'm sure someone will post here & I'll eat my words....but this is how I understand it.)

This isn't a Game-specific endorsement, but rather SITE advertizing. It helps keep ModDB running.
Hmn...this didn't post quite right. This is in response to the 'endorsed by the U.S. Air Force?!?' post.

I can not say enough about this game, first its an indie development team, second its damn fun to play.

I even went and purchased the game it was so much fun.

Rts/fps in your face siege warfare, epic battle, deep strategy makes for a game where when you've completed a match your left with the feeling of actually achieving something.

As an old jaded gamer, for me that's tough to find in any scene.

The games worth the play!