RWR beta 0.85 appeared in Desura a few days ago, with new features focusing on enabling new future features :D The item system has gone through some good refactoring work which allows new item types to be added more conveniently, with stun grenade and riot shield making an appearance in 0.85. 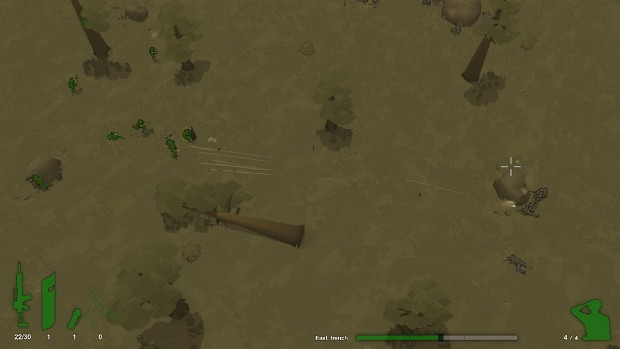 The idea is still not to start introducing items just for the sake of having lots of items. Stun grenade actually right now feels awkwardly similar to the regular hand grenade, just that the blast makes the soldiers recover for a time making them easy targets rather than insta-die. As such, it's more of a proof-of-concept item at this point, we'll be experimenting with it to see if there's a specific case where it fits perfectly, and if it doesn't, we'll just drop it and think of something else, easy as that!

Riot shield enables you to block bullets and stun grenade blasts with the tradeoff that you don't have anything to shoot with when using the shield. Bots will see you as additional cover - I hope other players realize that too :P - so you can use the mechanic to become mobile cover for others in an otherwise open space.

The other significant upgrade and enabler in 0.85 is the inventory UI. You can now hold down the pickup-key to manage items near you on ground, in your currently equipped gear and in your backpack. Interaction with weapon racks is also carried through the new UI. 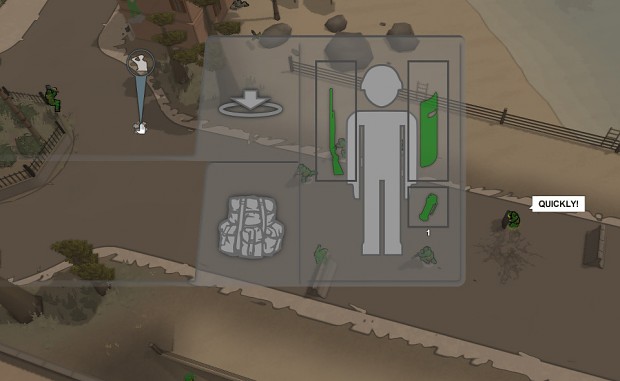 Backpack currently allows you to carry a number of additional weapons and grenades making it stand out a bit from the usual direction RWR has been going. This is also due to experimentation going on, but we will see a more specific purpose on having the backpack with you which ultimately is not allowing you to carry more varied firepower to the battle, at least not without an appropriate tradeoff. Join the discussion on the forum about the new inventory system, suggestions and ideas are always welcome!

These item related enablers largely benefit Invasion mode servers and the future extended single player campaigns. In the regular single match like sessions the backpack will mostly be a burden you don't need to deal with - for this reason, everything also still works just the way it has been; tap pickup-key to swap to the nearest weapon on ground and throw away your current, and now it works with grenades and secondary weapons too.

I could go on about the changes and the stuff they will enable, the server side data flow system for external control has gone through some great updates, it now works on Windows too, which basically means that with some easy hacking it is possible to control a single player game too already. This system will be used for scripting objective tracking logic for side-objectives, it can also be used to add custom chat message commands and who knows what; especially modders able to script a bit should find it handy once I get the examples published!

On another note, RWR Linux branch for Desura desktop app is currently stalling approval because of problems with the GUI toolkit used with the config tool. I'll rewrite the config tool within the next few days to get rid the problem once and for all, so in the meantime please use the standalone download for Linux.

Riot shield cool, please put some images of it, I haven´t seen them!

cool, keep up the good work

Just keep adding new weapons and cool features. this game will be great, and it is already pretty entertaining.