Instead of just stat numbers, a lot of character output has to do with gameplay styles. We wanted to include more ways to have more interesting starting characters to mess around with. Anything from making your character deaf, unable to run, various phobias, 14 years old, and lots of other ways that are reflected in the mechanics and visuals. This allows you to create interesting characters for a lot of combat variety, and also test yourself to role play fairly flawed characters, mentally, physically, or with fairly suspect past choices in their life. 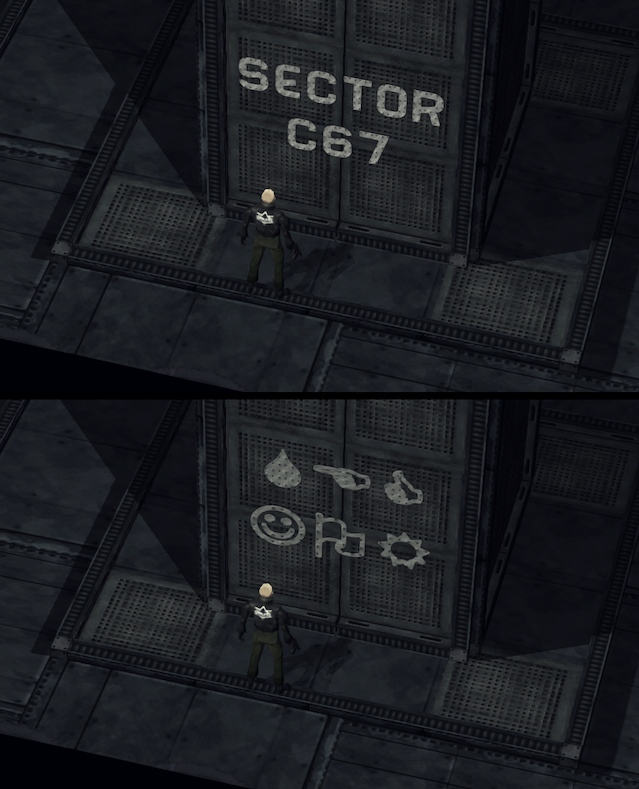 Where advantages cost you background points during character creation, disadvantages will gain you some. Here’s our current pending list for these Advantages and Disadvantages as it stands now. Originally we were going to have pre-generated characters for you to use in the alpha, but we’ll now have a character generator like in the actual game where you can create your agents, so you can put these to the test.

Here’s a glimpse at some of the Gained, Advantage, and Disadvantage background traits: 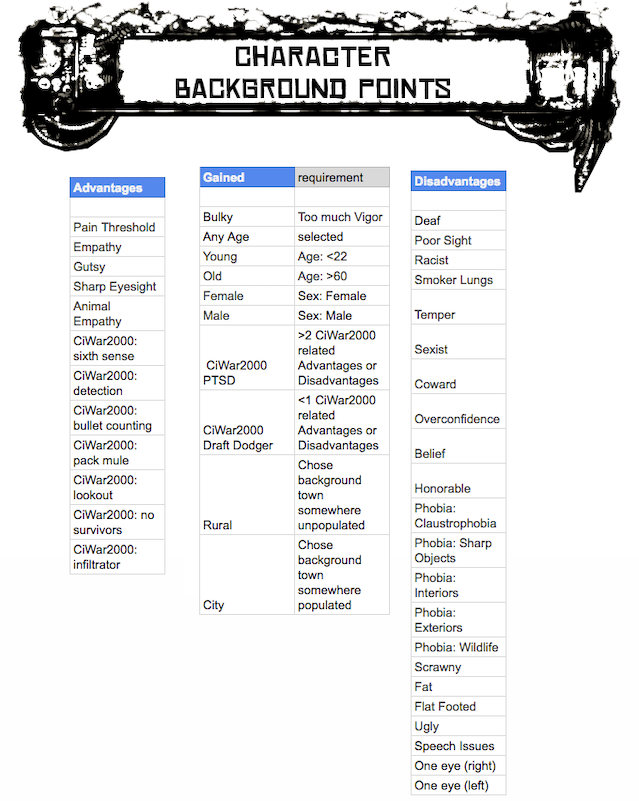 Age also dictates maximum Virtue availability. These are rough numbers to get an idea of how these might influence the character: 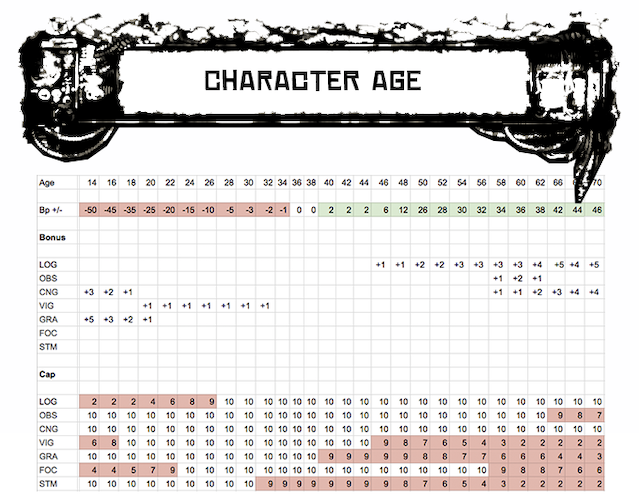 Visualizing a character’s line of sight as the character is one of the overarching visuals driving gameplay and simulation — it’s an isometric glimpse into their first-person view. Your character’s vision is also driven by stats, poor eyesight has smaller visions than others, and if you get wounded in your face or an eyeball, you can lose out on part of that radius.

Since the original Kickstarter we’ve refined the visual for it to be more exact (it was also tile-based then). We’ve also added in an additional radius around your selected character that represents their maximum hearing range. This is the distance they’ll automatically be rolling to hear other NPCs, and is their maximum distance of influence in the game, as everything outside of it is black.

Pathfinding returns, now with multi-locations during combat as well as automatic vertical navigation for you and NPCs!

The increasing focus to deliver simulation is what has evolved the ruleset and gameplay. It’s of tremendous help being able to adapt these ideas to a bronze-age game and a futuristic one, we can pop these characters in to either universe and see how things would make sense. GURPS became an increasingly influential rulebook, and while things are wholly different in application, we hope to capture that spirit within the systems in the game.

We finished off combat iterations the past few months by enhancing the way players target and roll-to-hit with it, which ultimately led to an overhaul of the ruleset. You can now aim anywhere and roll under your skill with the item to determine how successful you were to getting to your target. All item or skill usages use that model now. Allowing you to aim for things in the environment that we don't outright tell you can make for more interesting puzzles or interactivity. Lights for example can all be shot out now:

With a 3d world, thrown objects that bounce around, it seemed fitting to give the player some agency on where they are actually shooting. You no longer only attack targets, but can also attack anywhere you want, including where you expect targets to be as they are moving. If you do attack targets you can select which body part you’d like to try to shoot, and you’d track that body part until you fire or it’s no longer visible. Aiming for anything allows you to lead targets on the move or temporarily unseen (and thus unable to be targeted), or precise location to lay down cover fire for more than one target that might end up down the middle of a hallway or something.

Distance modifiers are no longer just static distance markers as with the original Challenge Target, but influenced by reference points around the projected line starting with nearest to the character attacking. This is all in-code in the game, but that sight-line checks for any nearby objects starting at the character and moves down to the actual target. So the idea for this is if you you have a reference for a target really far away, you can get visual bearings by aligning your shot with any nearby objects. For example aiming a burst fire into a clearing near the side of a building you hear an enemy running into would have that building act as the distance check, not the potentially infinite space behind it.

The crosshair for melee path for slash/thrust or your projectile line is your ideal hit location, and you roll to attempt to hit that location, regardless of or if you have a target in mind. Success means you hit that target precisely (in 3d space), and failure means you deviate it from a variable amount, so it’s considered a potential failure in most cases.

Another way of indicating health status for player characters and enemies, we're adding various states of wounded movement and idling. In the alpha you’ll be limping around if you’ve taken on particular Greater or Mortal wound, which acts a visual that you’re damaged as well as an indicator that your movement speed has been reduced.

Going into the alpha, here are the current wound categories and all the stats they can influence:

This was mainly a challenge shift from try-until-you-win save scumming to that of enduring with your failures. As we design the final maps for the game, one problem we were coming across was the tedium of needing to find areas to try to save, and ended up basing that as essentially checkpoints where it would be heavily implied to. Redoing areas would also end up being tedious as we made Wound-counts lower as well, so we’ve changed the death penalty system for the better.

Our goal was to incorporate the feeling of being in-the-moment without the comfort of knowing you could just reload easily, but without starting the game over or needing to start over at a checkpoint. The solution was just letting your character die, keeping their wounds, and starting them at a safe place (TBD) to resume. The world remains as you left it when you died, and you would patch yourself up, rest, or press on carefully, as any other Wounds would again kill you. It's a wonderfully gamey system that allows you to progress through the game while perpetually being worried about character health.

For a while now we’ve been testing with bargain-bin animations to get the job done, and we’ve just recently added in our custom ones and are they quite an improvement. In Serpent in the Staglands we were proud that each weapon type a character could carry had its own custom sprite sheet to go with it. It was another way we could cram some visual identity into those tiny characters. We’re doing the same for Copper Dreams, except with custom animations for each main item type with all different attacks per type. So while that’s a lot more animations, at least we don’t have to animate them in 8 directions.

Our existing system has a base of 110 animations for a weapon type, for instance a pole-arm vs a pistol. This doesn’t include individual reloads per type of weapon, or any unique or special humanoid animations for them, like hulking cyborgs who stomp around or small children who’d visually struggle looking down the sights of a 130 pound Coilgun. Those are fun to do and look at so they are a nice visual addition without much extra costs besides a cup of tea and a few hours. While all these animation speeds are driven by the ruleset and individual character stats these animations act as a general guideline. Nimble characters can jump or kick open doors faster than others, for instance.