Welcome (back) to Resistance and Liberation. This is part of a RTTF (Road to the Future) update and I thought it would be nice to post here. I know it has been a while since you have seen one of these posts and I thought I would try to catch you up on all that has been going on around here. It is my goal to get you one of these RTTF posts every 2 weeks or so. Some might not be as informative as this, other more so. But we are going to try to get back in the routine of getting the information ou

The team as you know is still in need of some team members. Well the good news is that we have some new blood here already. Let me tell you the new blood around here has sparked life in the Dev team that has been here for a long time. I can tell you for sure my head is spinning by the work progress. So without any farther ado let’s welcome the new members:

As you may or may not know the team is working to get the game moved to the Orange Box. One would think this is an easy task but to be honest it is a big project and one the team has attacked with a frenzy of work. Let me start with some of the Models that the boys have done.

Ryan Duffy has been working hard on an new US Paratrooper Model. He not only came up with something that is very nice to look at it plays better than the old one. He is made to be less laggy on your systems and in the end the game will run just that much better. If you ask me he got more with less. Well don’t take my word for it, look for yourself. 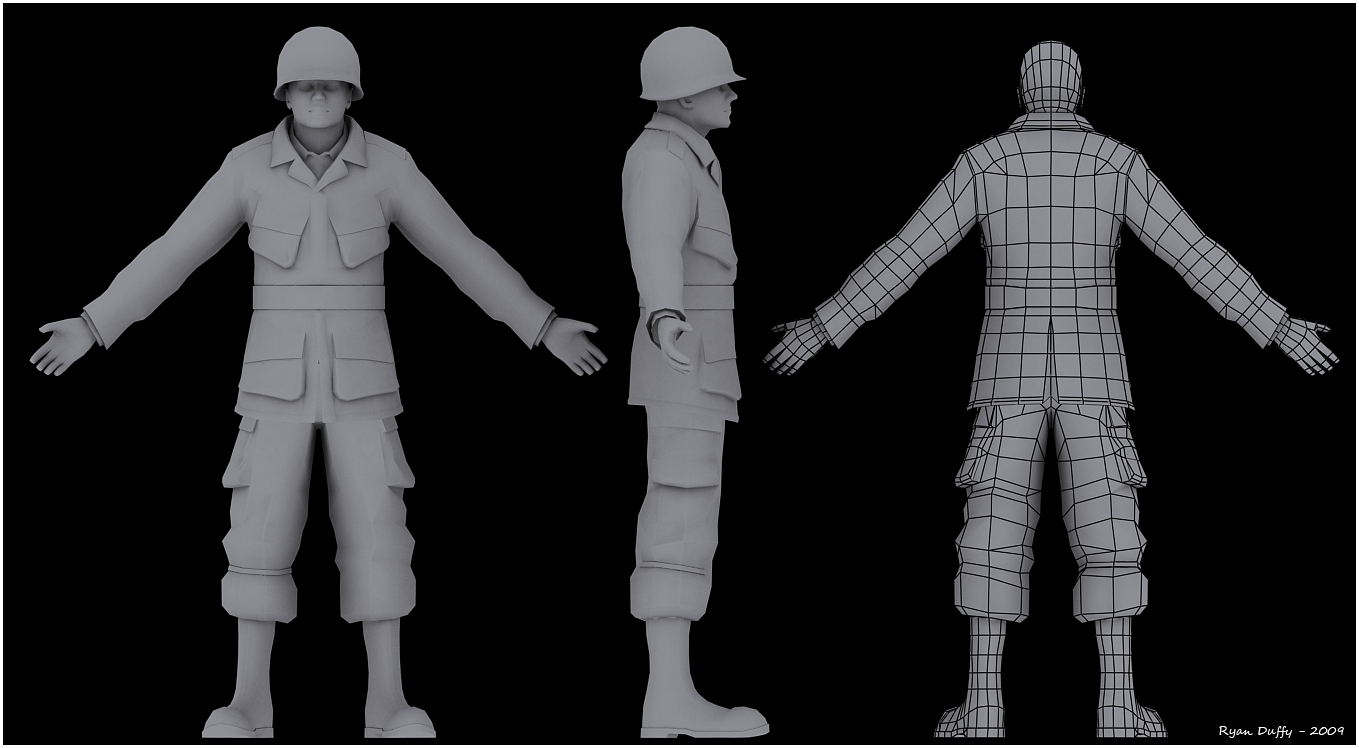 Toni Kreska has also stepped up with a model that was for one of the maps. Howver after this thing hit the Devs they all wanted to put it in their map. Could we see a map just for this? OK, maybe not but look at this work of art will you? This Tram is a sexy piece of metal. 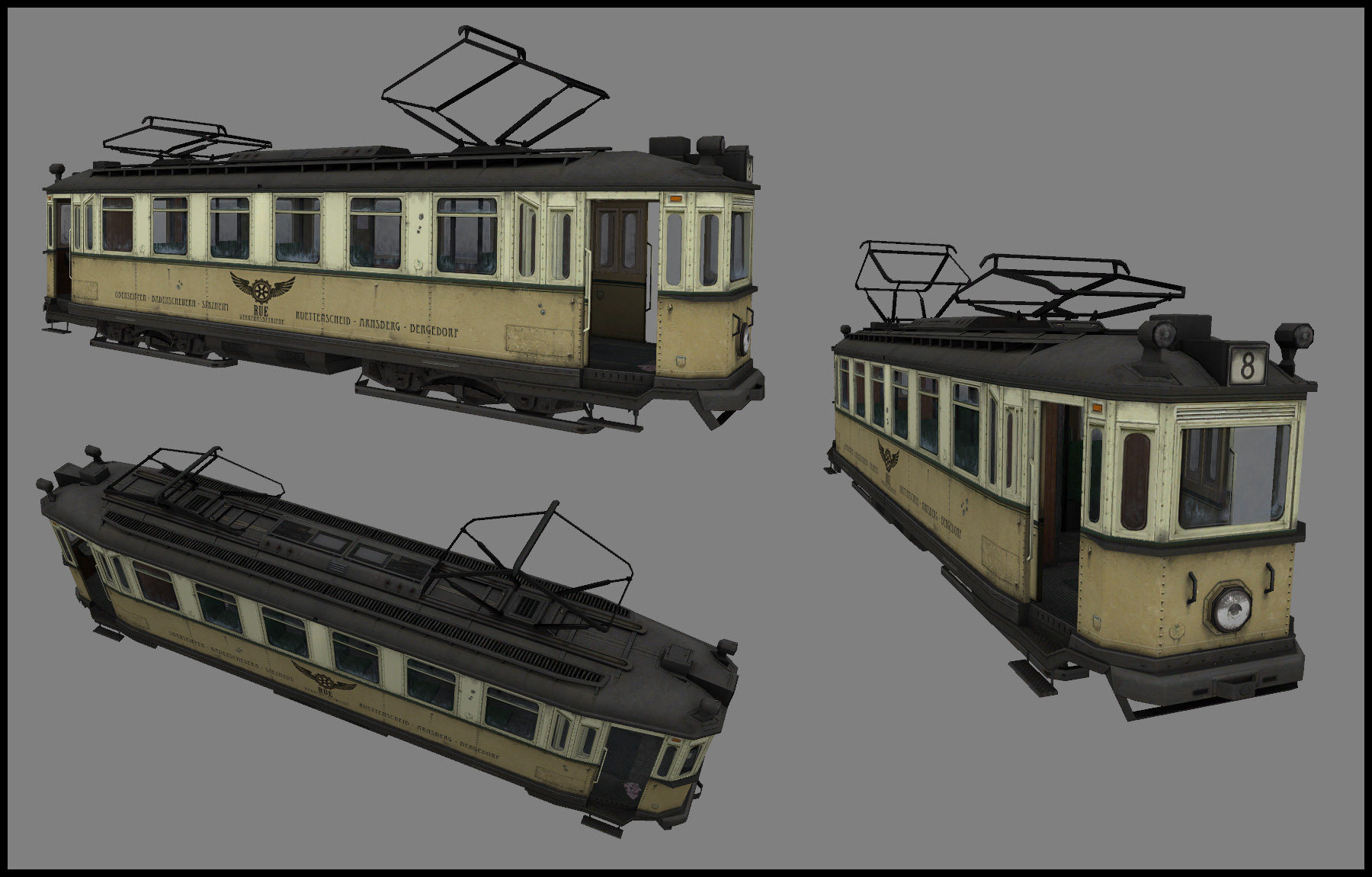 OK, I know what you are all saying, “But Hunnicutt, these things are nice but what about the maps?” OK OK I hear you, I can tell you about a few pieces of work that the guys are either done with, working hard on or just finishing up. First up: Robin Morris came in as the new guy and started working on Carentan Causeway. This is one of the maps that was put on the shelf for a while due to man power issues. Well, if you ever worked on maps you know how hard it is to do them, let alone pick up one someone else started and make it yours. Well he not only did just that, he did a damn fine job of it... but do not take my word for it, look for yourself. 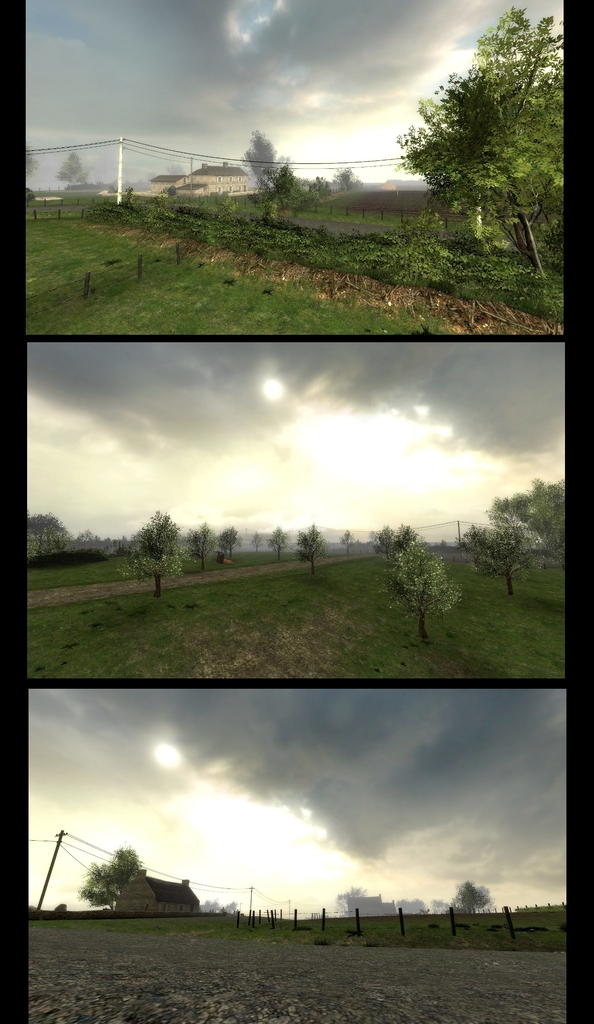 Andrew Hayes has been updating a the map LaFiere. He has been placing buildings, lighting and other static props for the masses to see. Updating LaFiere with buildings, prefabs, and textures. This shot shows one building prefab, and a large number of new foliage and other types of static props. You may see the new foliage Tiger is creating in these shots. They will be integrated into all maps soon. 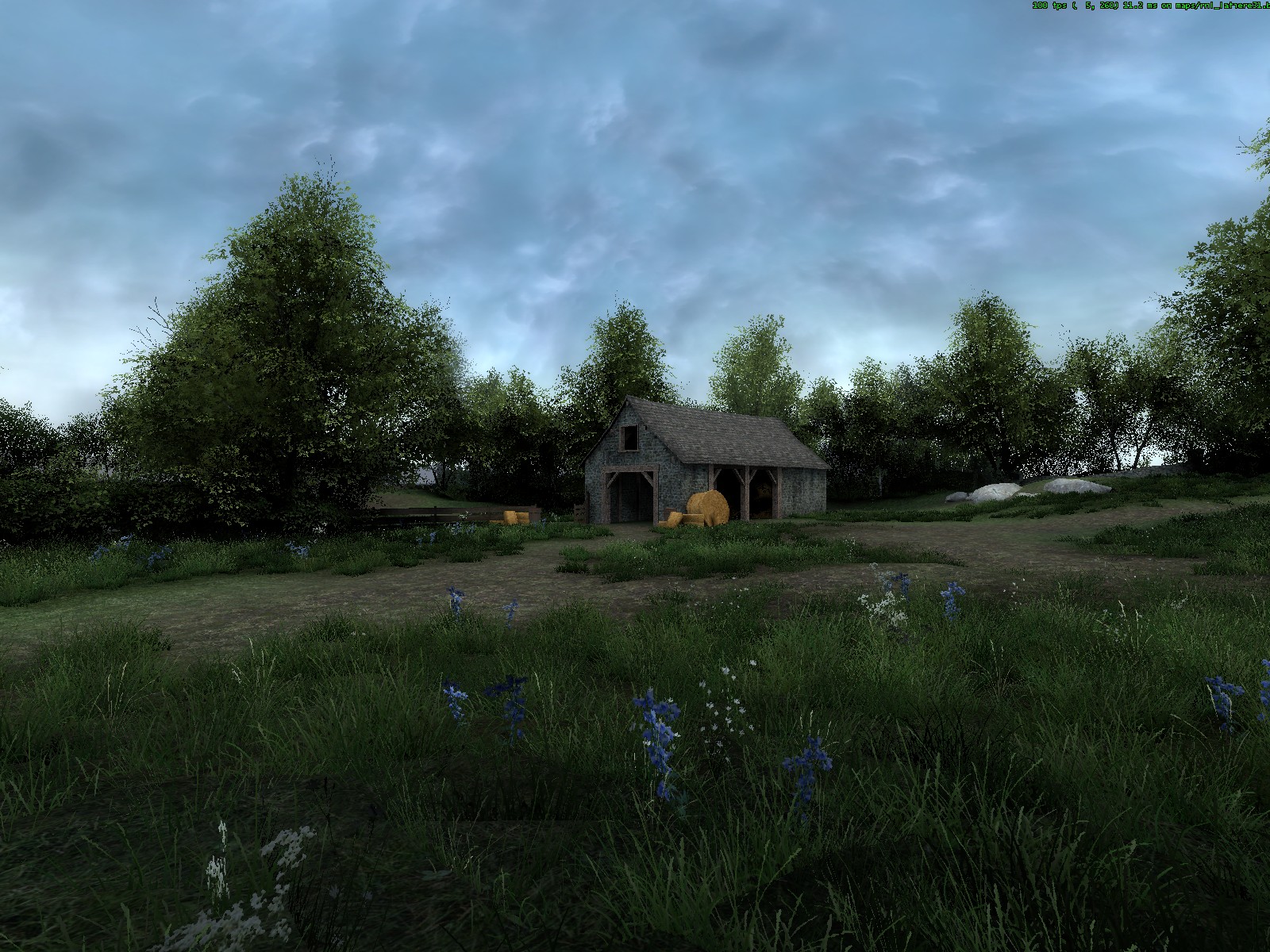 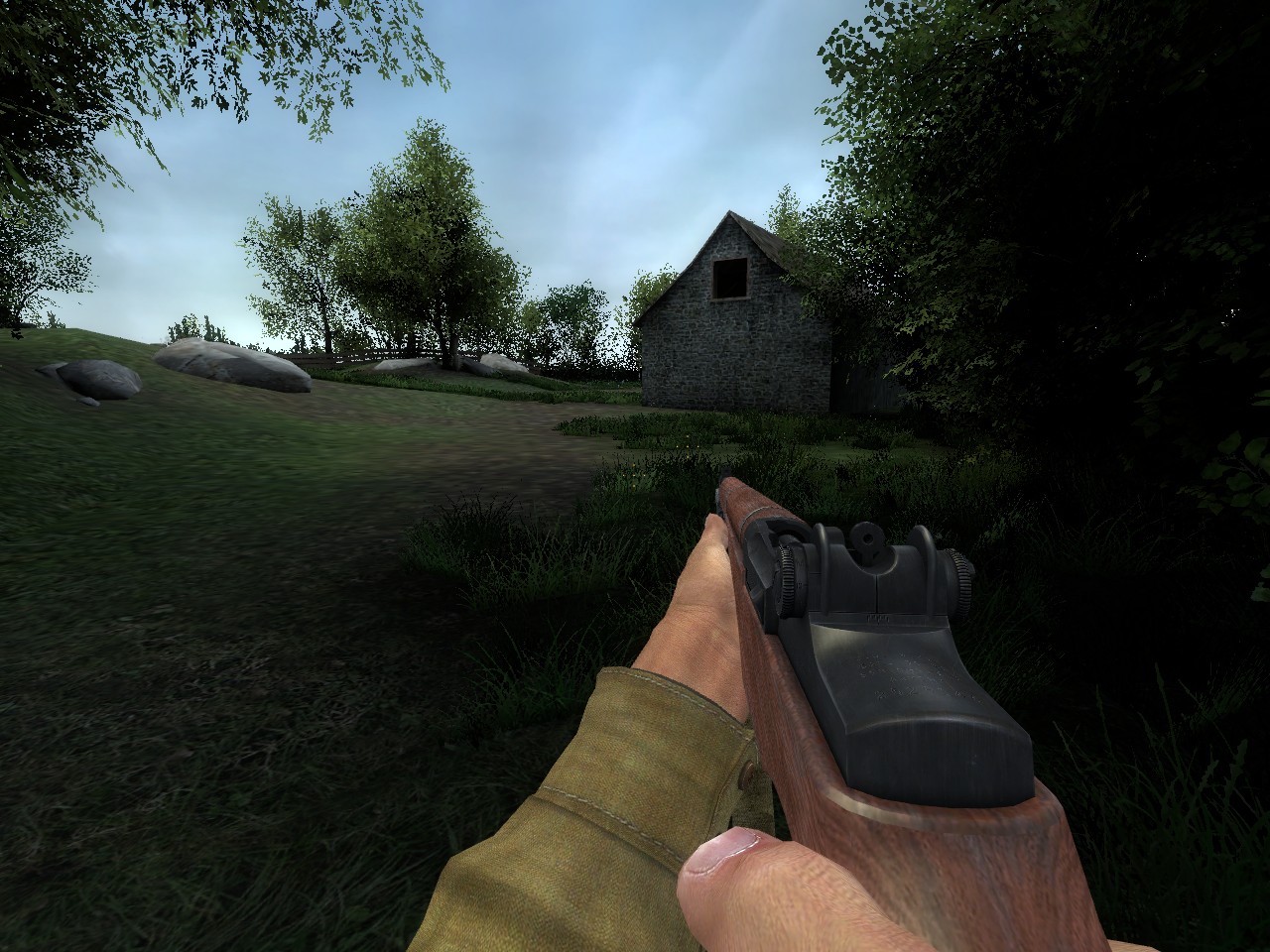 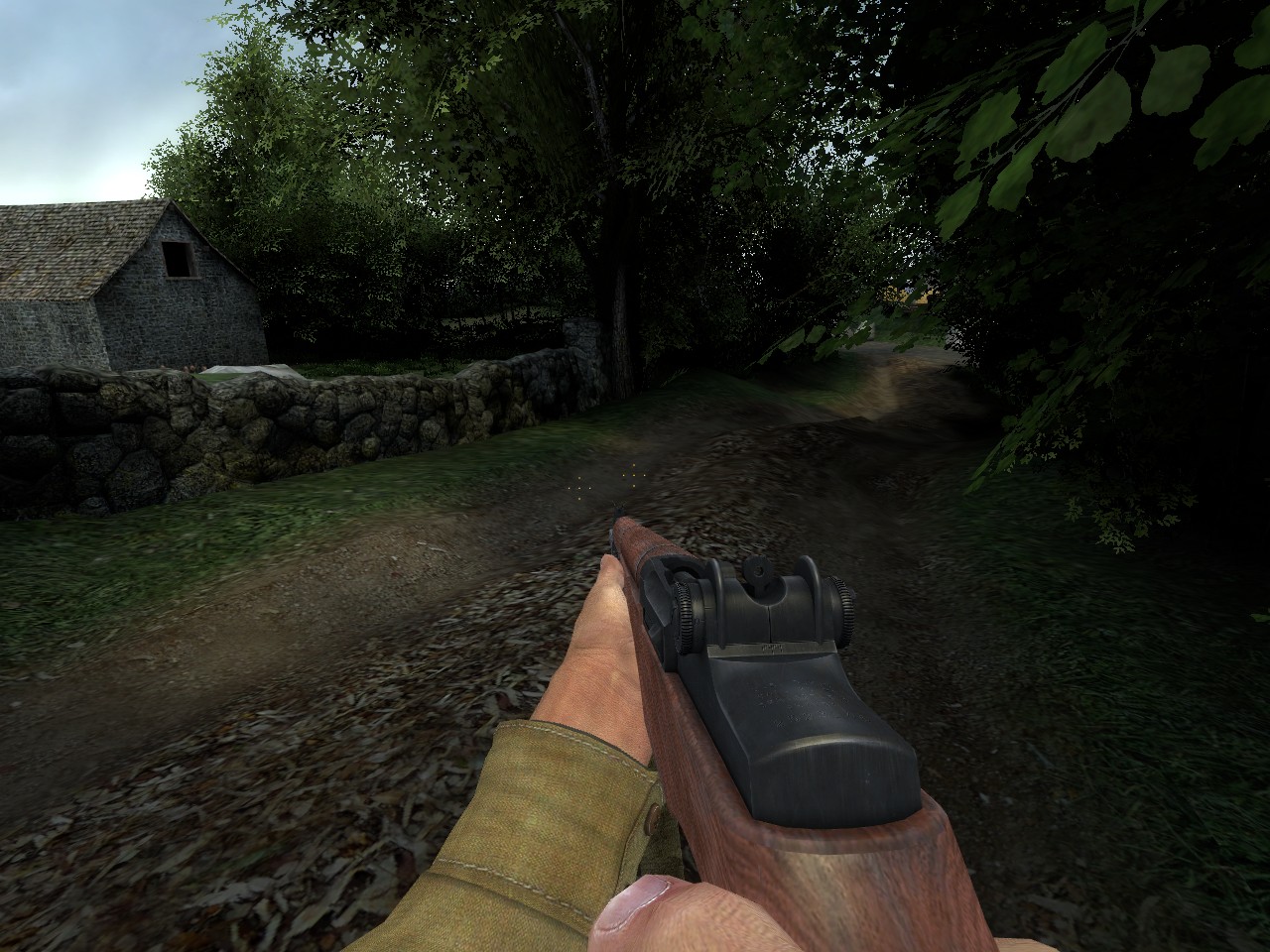 Last up this week is the work of Stefan Bermig. He has been putting the finishing touches on St. Côme du Mont. This map was nice before, but now, now she is a stunning work of art. These updates and changes are for the Orange Box build.

You may know me as the new PR guy around here, some know me as Lt. Col. Hunnicutt. In truth I am a fan of this mod that got lucky enough to get the inside track. There are many other projects that we are working on for you. Things like game play, maps, controls, new class and weapons... so many things that I would spin your head if I told you all of it (might get fired too

). See you two weeks from now with another update...

Oh you got Hypno toad on the team. *OkeiDo waves*

Nice update guys! I've never actually played this but I guess that I'll have to give it a go sometime soon.

You haven't played this!?

And congratz Hypno! Finally get the place he deserves!

Lookin good! keep it up :D

Great stuff, those maps are amazing.

Good to see news on this

I love the look of these maps! Everything is looking great. LaFiere is looking most impressive :D

The US Paratrooper is looking slightly odd. Is he too talk and lanky or does just need some more weight? Or is it just his head that's too small? Not sure. Amount of detail looks good though.

It's kind of an early draft, a newer one was posted recently on the forums and it looks much sharper. Don't worry about it.

1. What's with the two crosshairs in the screens?

2. About those pants wrinkles. Why not just have them flat (I assume that would make it have less polys) and add an wrinkle bump/normal map?

I love how this mod plays, glad you're keeping it alive & keeping everyone informed too, it's looking great.

This mod is absolutely great. and its only going to get better.

it proves realism can also be fun.

love that tram, keep up the good work

Good to see there is still progress. I f***in love Resistance & Liberation :D

For all of you that havent played this mod.......PLAY IT! And by the way guys, sweet updates. I cant wait for all this stuff to be finished.

Just wondering, is this mod gonna get a Hill 30 too?