This week, we show you the infamous displacement marker!

Last year, we wrote about how we almost submitted Okhlos to the IGF. We were about to do it, but we decided to back off because we thought that Okhlos wasn’t in proper shape for something like the IGF.

This year, we are much more confident. Okhlos is far from complete, but in its current state, it has lots of crazy things happening that we think are cool. Also, the visuals are on more solid ground. And that’s without mentioning that the game has changed a lot from those days, when things weren’t procedural, and we didn’t even have a roguelike foundation.

That’s why, this week, we are starting the “ROAD TO IGF” updates. They will all be very brief and straight forward, in order to make the most of our time from now on until the 22nd of October. The final update in this saga will be just two days before the deadline, and that will include a changelog from this version to whatever we have in a month.

Now, for this week:

There are certain GUI elements that are crucial in a game. In Okhlos, one of the most important elements is what we call the displacement marker, that little flag that shows you where are you directing your mob.

At first, this was a very difficult concept to explain. People didn’t seem to grasp the idea of moving the mob alongside their character, or using the stick in order to attack.

Ye olde displacement marker. So long buddy…
So we solved this (at least for now) by changing the graphics according to the context.

Right now, we drafted some ideas about how it should look, but we aren’t quite sure about which direction should we go. They are very showy, that’s for sure, but when you have 50+ people around, maybe you need showy. We still have to try something more subtle though.

Here, you can see the displacemen marker in context

Also, we prepared an alternative, which is the arrows rotating, and the swords pointing and scaling. Exactly the opposite of the previous one.

Here you can see the arrows rotating around the marker.

And the swords scaling down
We’ve just arrived at these options, so any comment or feedback about this is super welcome!

Finally, another thing we had to decide is to make the displacement marker a billboard or not. All the units in Okhlos are billboards, which means they always face the camera. Opposed to that, not being billboards means that they will be just stand there, and that they will not rotate according to the camera’s position.

I think, in this case, the best solution is to not use a billboard. This will give the player a better sense of depth, and a better idea of the position of the marker. 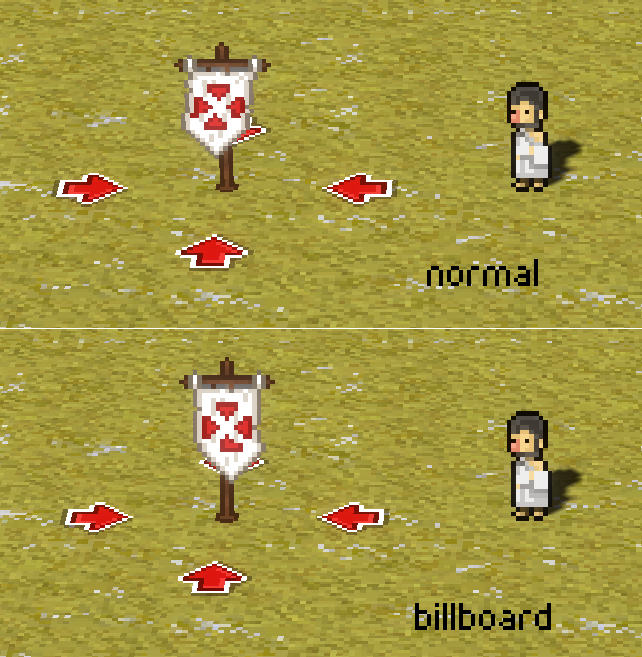 It’s veeery subtle, but it’s there!
Anyway, that’s it for this week! We will be working hard in order to have a cool build for the IGF. Wish us luck!

I prefer rotating arrows and the swords like hitting the object, just like Command and Conquer games :P
Great ideas i have to say.