Hey there! It's been about another month since the last set of updates, and the mod's due for another big update. Normally I would stretch this out over a couple days - and there is certainly enough content to cover to spread this out - but in light of the fact that I want to stick to my planned release date, I'm going to go ahead and make one large update here.

First things first, though. This upcoming Saturday - July 24 - will be the planned release day. I can never guarantee what time the news post or the upload will get approved or validated here, but I can promise that there will be something submitted on my end on Saturday. I'll try and post it early in the morning so that maybe it gets posted here before the end of the day.

That said - the updates! If you've seen the trailer (which will be posted at the end of this update, but has been uploaded for a day as of this writing), then you'll have some inkling that there's a single-player campaign mode added to the mod. This campaign is similar to the stock campaign in terms of the style of mission, but its implementation is rather different.

The campaign - which is called Dark Times: The Rising Son - uses the Galactic Conquest interface to play through. Instead of being a simple list of missions, this means that the Rising Son campaign can do a few new things. First, you will notice this: 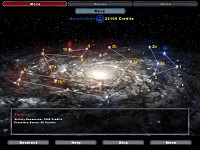 The path on the above screenshot has been drawn in for clarity - you can see how, in addition to progressing through the path of the campaign, the player can take a handful of "side trips." These smaller branches on the campaign tree allow you to complete smaller stories and earn more, creditwise, than you might otherwise.

That leads in to the second aspect of using the GC interface for the campaign - credits. If you are familiar with the stock Galactic Conquest, you will know that you can purchase a number of different things to aid in your missions. The same holds true here. You are allowed to purchase some basic single-mission bonuses, like health regen or infinite ammo: 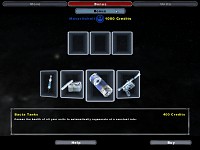 These bonuses may be invaluable if you're having a tough time with a specific mission. However, these bonuses are single-use and will apply only once. There are more expensive bonuses that, in the long run, may be better investments - hero support units.

In every campaign mission, the player will have access to all his basic unit classes. There are also special hero support classes that can be available for the missions - but only if you've purchased them ahead of time. While you can't use every hero support class on every mission, there are a handful that are assigned to each mission, and if you've purchased one or more of them, you'll have access to these powerful troopers that in some cases may be instrumental in completing the mission. 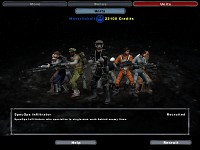 This is a one-player attack only - while you will still use "turns" like a regular Galactic Conquest battle, you will be the only one being able to do anything. The galaxy map is, in effect, just that - your map and menu for moving from mission to mission. There are sixteen total missions in the Rising Son campaign, and it will take you from just after the Battle of Yavin in Star Wars to the Battle of Endor in Return of the Jedi.

Space Mon Calamari is, in a lot of ways, a fun experiment for me. I wanted to see how many aspects of a space battle I could meld together without losing overall coherency or clarity of purpose. The end result is a space map with something I'm calling simply "Space Mode," because calling it just "conquest" or "assault" or something else would be to minimize what it does.

Space Mode is a lot of things. In some ways, it is a conquest mode. There two capital ships for either team - each team has a Nebulon-B Frigate in addition to its main capital ship - and on board the command ship there are a few capture-able command posts. As with any conquest map, if enough of these are in control of one team, the other team will suffer attrition through a reinforcement drain. However, eliminating enemy reinforcements is the only way to win the mission - there will always be one command post on any ship that is uncapture-able by any assault team. To allow for this kind of command post play, the interiors of either command ship have been expanded. 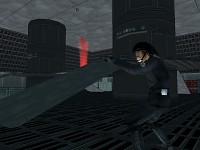 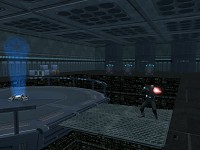 In other ways, Space Mode is like space assault. All the critical systems of a standard space assault map are present and can be destroyed. While this is no longer a mission goal, it is still definitely a worthwhile task to perform, as any enemy critical system destroyed will net your team a reinforcement bonus. Eliminating the other team's smaller vessel (not the Neb-Bs, but the smaller frigates) will also ensure that some of their autoturrets are removed from play. 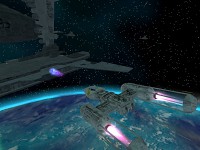 There are other aspects to Space Mode as well. Like the earlier Dark Times' team dogfight mode, in this space mode space heroes are present and usable by either the player or the AI. However, the heroes here are random (although the space heroes is a small selection pool) along with the time period. There are two time periods here, just like the land maps - you can have either the pre-GCW time period, to which the TIE Vanguard, early-model Y-Wing, and Z-95 are unique, or you can have the GCW period, to which the TIE Interceptor, Y-Wing, and A-Wing are unique. 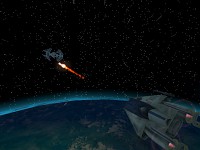 One other thing worth mentioning - something that may only be of interest to you if you've paid careful attention to Battlefront 2 space maps - is that in this space map, you will see AI successfully pilot and land assault shuttles for either team. This is a critical aspect of making something like this work, and it is something you will find in no other Battlefront 2 space map - including any stock maps. It took some hackjob scripting, but the end result works well and definitely contributes to the overall experience.

On a smaller, but semi-related note, several small changes were made that affect space maps across-the-board. The Rebel Pilot now has a pistol instead of an ARC Caster, the Imperial marine was updated (for the GCW era only - the pre-GCW era marine is the same) from an Evo Trooper to an Imperial Navy trooper, and all the cockpit models were rebuilt or retouched. 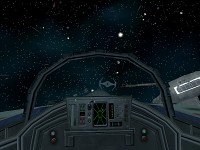 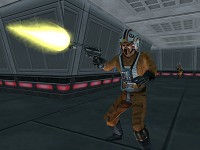 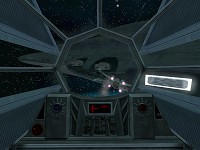 That's all the updates I have for now - and all the updates you'll see until this Saturday, when updates will take on less relevance with the actual release of the mod. Until then, I'll leave you with a look at the pre-release trailer for Dark Times II: Rising Son:

I wonder if i would re-install battlefront and download this but it takes too much time ;)

It isn't out until the 24th. read the article.