We've got much to show this month, so here's the second August edition of our monthly development round-up for Rigid Force Alpha, with fresh footage from the game - and our first fan-contribution!

And here we are again. People, this month we’ve had so much to show that we decided to post another article. This is now Rigid Force Alpha Bi-Weekly Development Roundup, Issue 1. Say this quickly three times in a row before heading on!

Long, snake-like creatures, inhabiting in the sands of Vurgos. Instead of eyes, these creatures rely on highly sensitive sense organs located inside their giant maws to track down their prey. These creatures are highly dangerous enemies, not just because of their sheer size, but also their lightning-fast attacks. Watch out pilot! 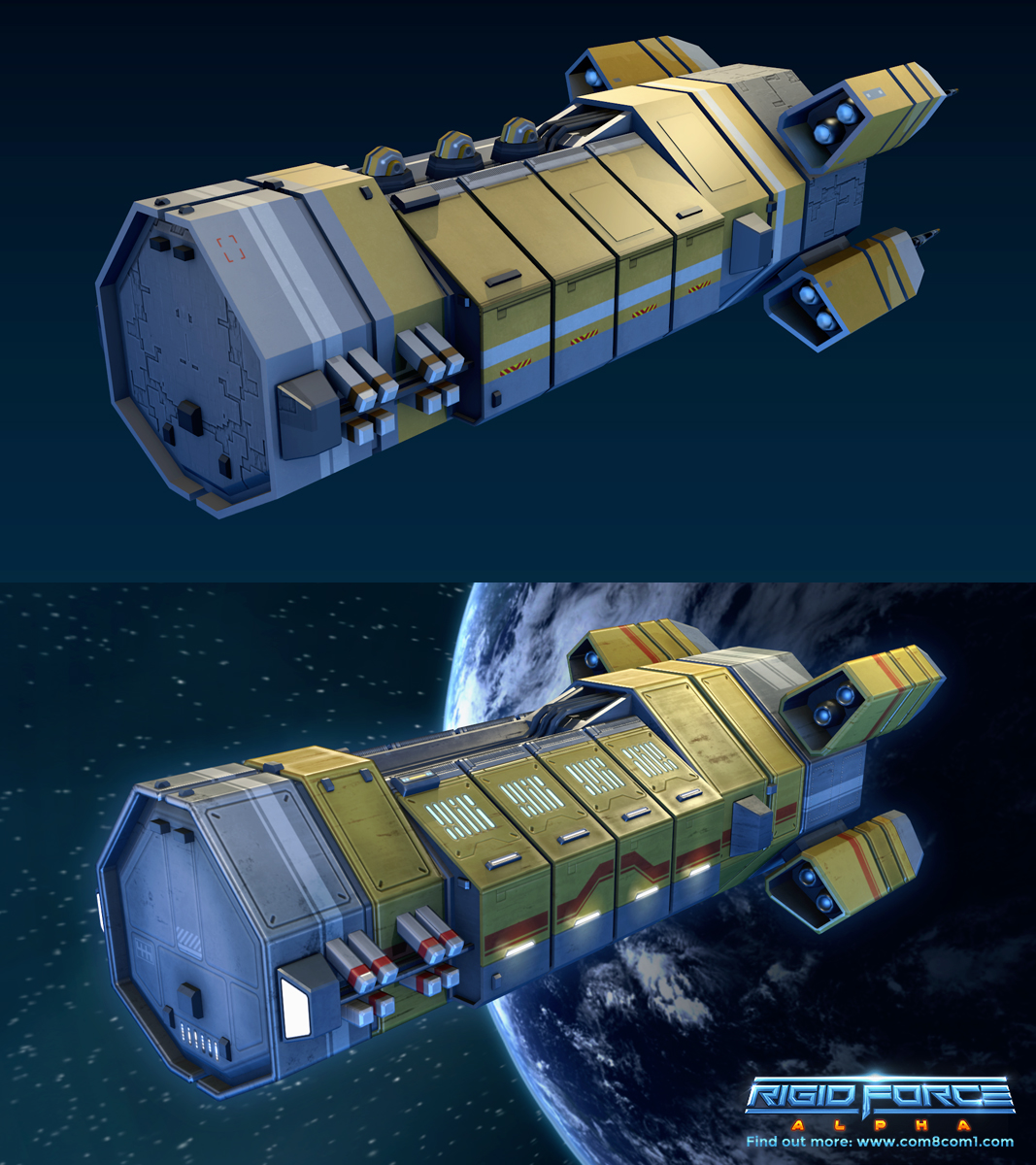 You all love those before-and-after comparisons, don’t you? We sure do! Here we have the armed transport ship ATV6 from stage 1, before and after a major texture overhaul. A high-poly version has been created for this one in order to incorporate many additional details, while leaving the basic shape untouched. The new specularity and self-glow maps also add to the finish. Credits where it's due: Base mesh created by SolCommand. Thanks!

And here’s a GIF of our tiny Walker Bot which you’ll encounter in several stages of the game. We recently tweaked animations for this one, and thought we might show our progress. So, here it goes - literally!

Energy dropped by destroyed enemies can be used to charge your ship's main weapon in order to inflict a lot more damage. Each weapon you collect has its own charge effect, and can even be multiplied by collecting add-on weaponry!

Collect additional weaponry and arrange them around your ship – this way you can either concentrate your shots or cover a wider range. You can even dock them to the rear of your ship to fire backwards!

Here’s a first glance at the vast underground caverns of Vurgos. Despite being located midst a hostile desert, this place is crawling with life. Countless alien creatures are lurking in the sands, waiting for careless prey. Be on your guard, this fight will be a tough one! 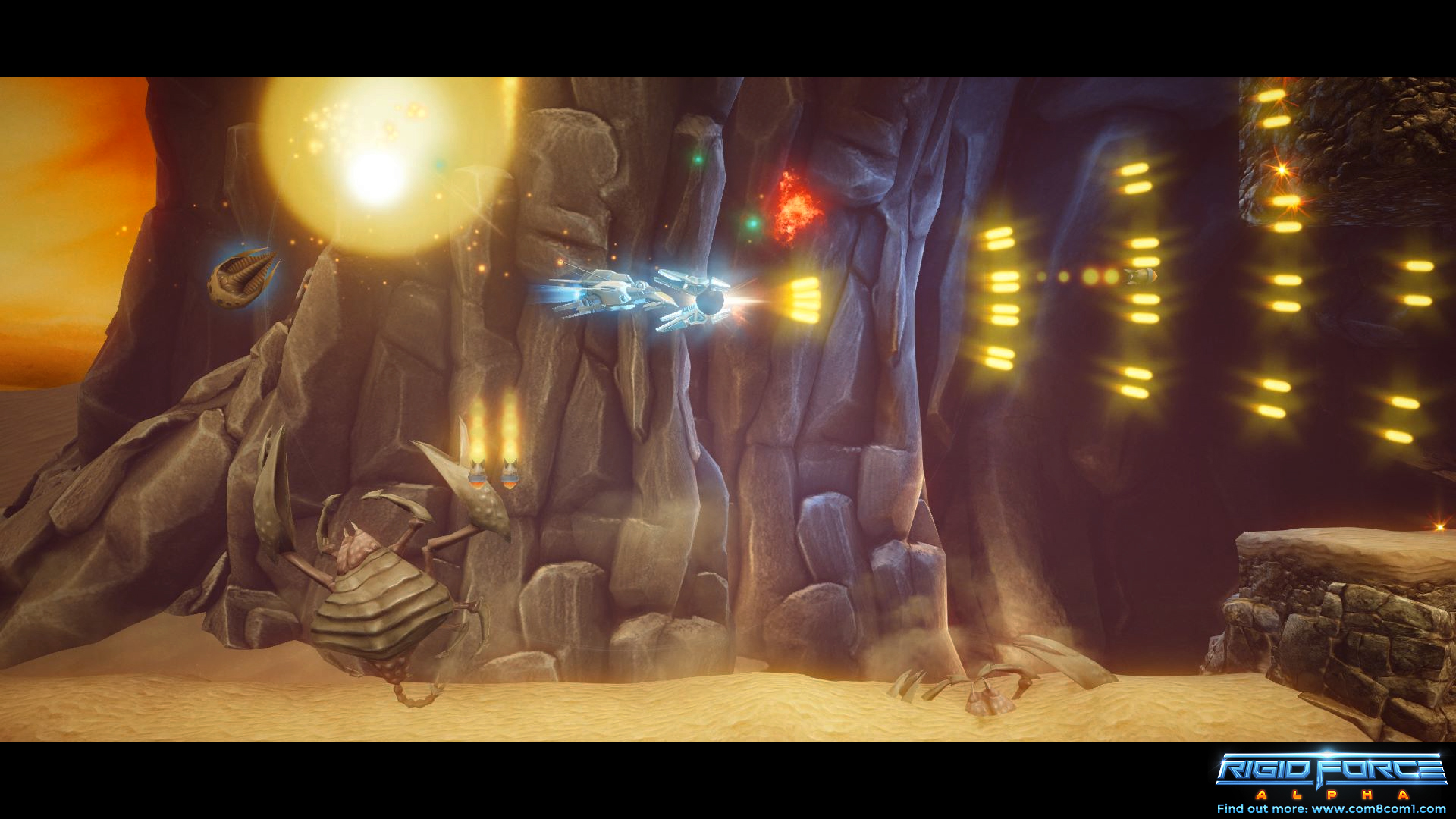 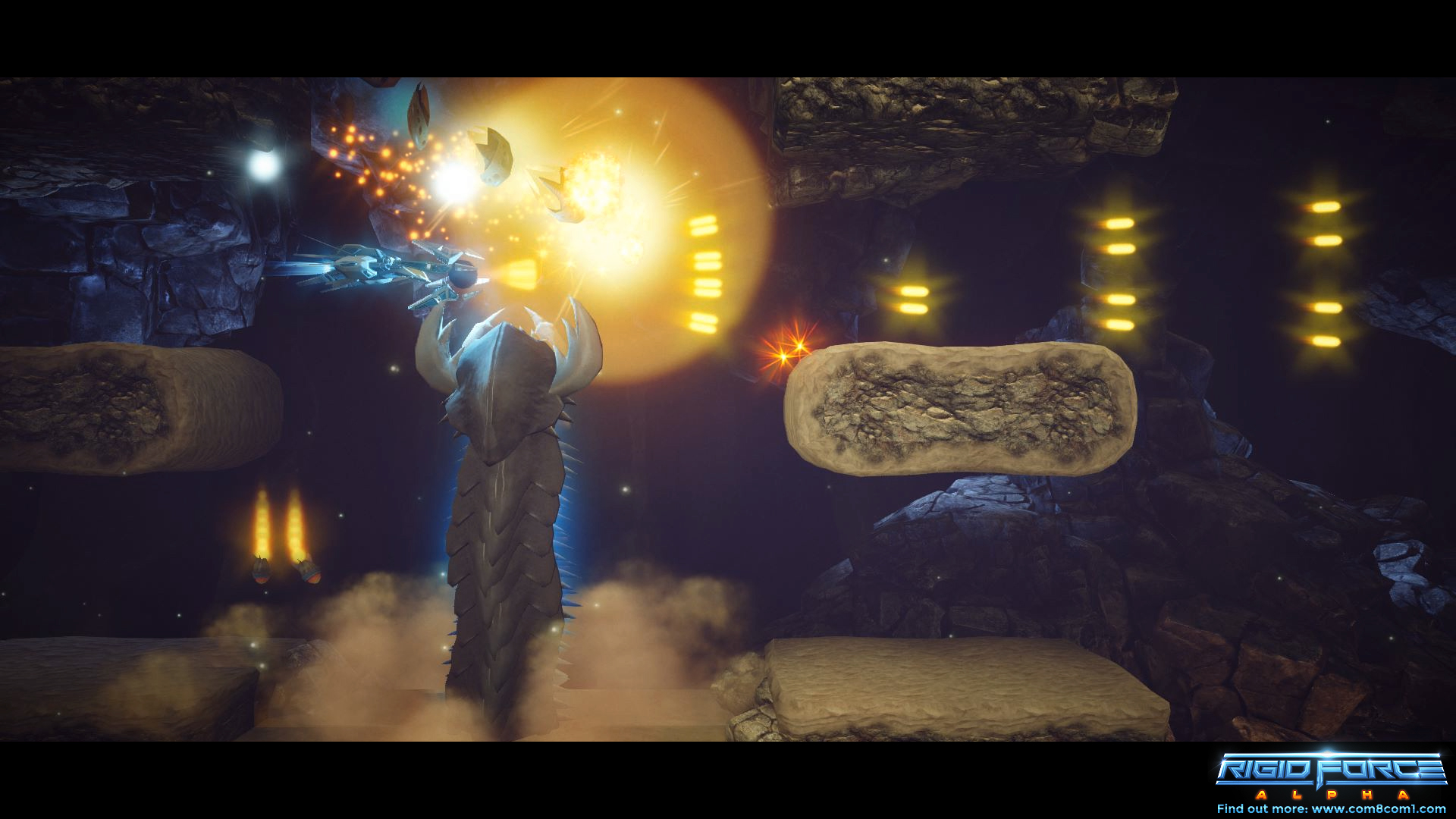 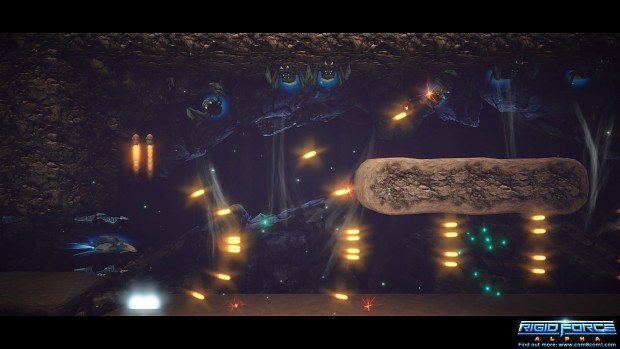 Rigid Force Alpha seems to hit a nerve over in Japan. To be honest, that’s quite what we were hoping for, and so it’s not a too big surprise for us to be getting more and more attention by our Japanese Twitter friends.

Within all these retweets and discussions we discovered a very cool contribution by musician and sound artist Hideyuki Ashizawa. If you're a veteran gamer, you might know him under his alias “ASSHY”, from classics like King of Fighters or Samurai Spirits 2.

ASSHY took our old Boss Battle trailer and gave it a whole new feel by adding his own music and sound effects. The results of this two-hour training exercise can be seen (and heard) here: Youtu.be.

looks so amazing!
I love this genre, really want to play this game