Today we are going to be showing off another one of the weapons blueprints again, more specifically the Rifle blueprint, currently called “The super awesome alien blaster ray”.

... to another Eden Star update! Today we are delving into the weapons blueprints again, more specifically the Rifle blueprint, currently known as “The super awesome alien blaster ray” internally. As with the pistol, all slug weaponry is a design choice implemented for those who just want a good old fashioned way of slinging lead down range, but they are also a specific reminder that the matter manipulating material; Teslinium, is a finite resource, used for only a few specific tasks due to its extreme rarity and reveared value. Teslinium is marked by the Paladins as a sacred source of power and is the defining factor that helped save humanity from near extinction.

Teslinium shards are often crafted into Spire grade Mata-Tools (Remote Manipulation Devices) and earned by the highest class of Pioneers of the migration fleet providing almost god-like powers of matter manipulation. Pioneers are augmented humans, mutated in order to wield Spire grade technology and cerebral enough to project their consciousness into replicant surrogate cyborg shells. These surrogates are equipped with Mata-Tool/RMD's, used to manipulate matter and harness energy for both creative and terribly destructive means. This provides Pioneers with the ultimate power to craft and change the world around them. Teslinium is in short supply as it is primarily used to power interstellar travel. When used for such feats, it is no longer an almost perpetual energy source, but instead a finite and valuable resource with no specific origin, only found scattered throughout the universe.

Therefore, think of RMD Teslinium technology as new and in its infancy. Slug weaponry still exists, is cheap and is here to stay, but so does augmented tech... Such as Teslinium reaper clips; a Faazah Corp, blueprint and also Kinetic seeker rounds by Aeon Systems... All of these are Lore based additions that the team want to add as development progresses...

So, back to the gunz!

As with our other physical weapon Blueprints, the grand vision for Rifles is a level of customisation delivered by crafting different component Blueprint parts. Please note: in the first early access release of the game, the modular weapon crafting feature WILL NOT YET BE AVAILABLE but you will definitely be able to craft the rifle as a single/whole item. Customisation and modularity comes later! 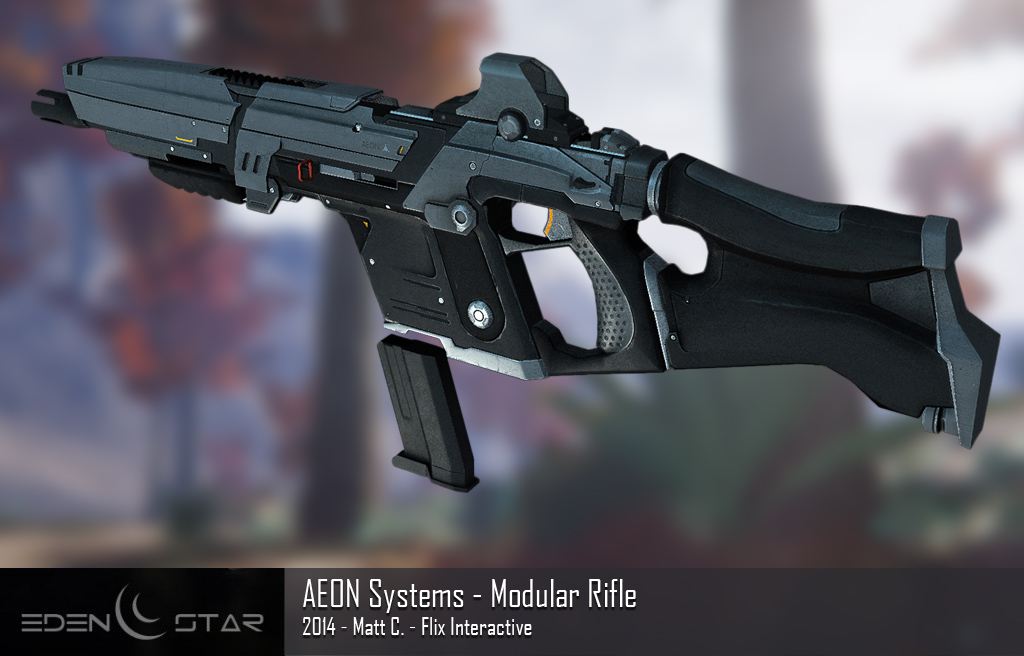 Throughout the design process we went through many iterations for the modular rifle blueprint system aesthetic. Each component’s size, colour and shape would need to feel unique yet act like a modular part to fit with components from a different blueprint. Each part would also need to be balanced, considering mechanics such as rate of fire, reticle design, spread, zoom or sight enhancement and the amount and type of damage it can do. The first version of the compiled Rifle that you see in the video, and available to craft in the early access release as a single item, is the compiled Aeon Systems Stock (inc. Grip), Top Rail, Firing System (Energy/Ammo Source) and Barrel. 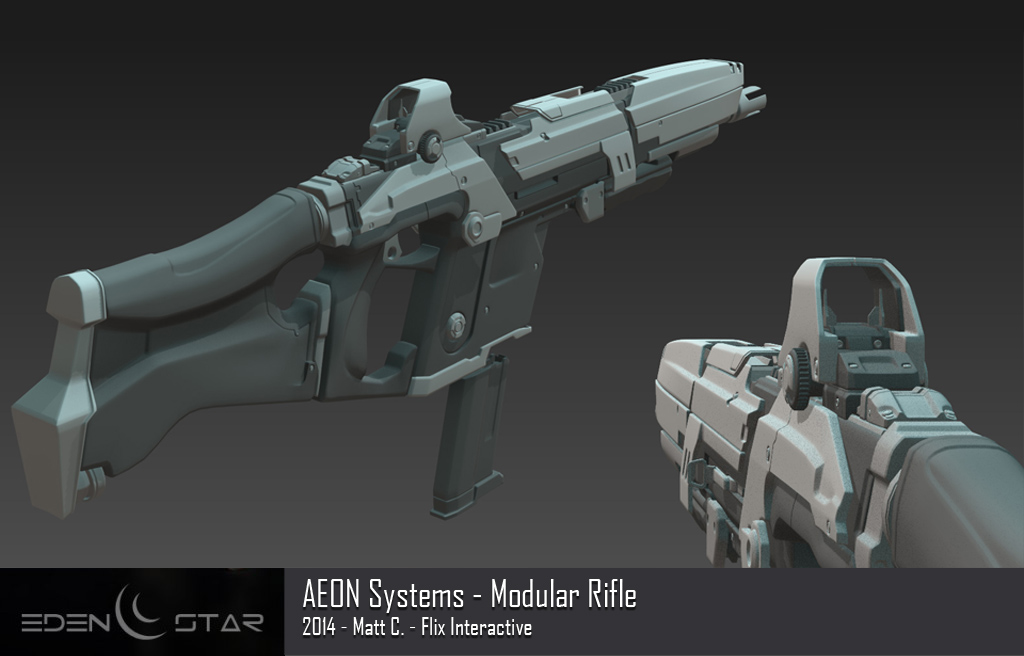 Although there is still some balancing tweaks to do, this weapon really has come a long way and we are really happy with the (almost) finished result. For the rifles we wanted to put a futuristic spin on what is essentially a traditional weapon, which meant taking a look a lot of different weapons, much in the same way as our pistol. Everything from SMGs to LMGs, from video games to books were used in our research. From recoil to bullet spread and range, we wanted the weapon to feels as good as it looks. This setup has a three round burst fire with a 1.5x Zoom and 30 rounds in the clip. It fires almost as quickly as you can pull the trigger allowing you to lay waste to all that stand in your way with a well placed shot!

This is still a work in progress so remember to stay tuned for further details in future posts, and until then, happy hunting!

If you like what you see, please vote for us as Indie of The Year by clicking the button above ^
Leave us a comment and let us know your feedback!

Thanks again for your support!

If you've got anything you want to say about today's post, or anything else, why not post on:

As always, if you haven’t already, you can play the Pre-alpha Combat Tech Demo now by pre-ordering Eden Star here! Only $15 gets you the UE3 Tech Demo and full access to the UE4 based Alpha and beyond!

Love it. Waaaay better than the pistol. x3

The render makes this rifle look very sexy and sleek, but the video gets me the idea that it's a autogenerated Borderlands 2 Weapon.

Maybe you want to take out some of the comic and fast style of the animations, and add some actual dark and slughishness to the animations.

I see your point, and agree. Still, I am happy to see news.
If I could pay for 3rd view in addition to my current donation, I would be Crazy happy..

Thanks 56er, do you have any references for the darker/sluggish anims so that we can take a look and see if we can scope what you and Jetcutter are looking at? Any youtube vids etc. are really appreciated.

It's a cool design. Reminds me of a cross between a Vector smg, G2A2 from FEAR and SBP500 from timesplitters Future Perfect.

Dude Thee
Weapon Model Is so cool
But I Recommend That you need to have a Camera Shakes in your Animations to have more Epic Gameplay.

Definitely needs camera shake and balancing, we also want to introduce spread on movement and greater accuracy with ADS/crouching etc. within reason.

We are toying with the idea of also removing the standard reticule entirely and adding a level of auto aim, similar to the old Goldeneye (weapon turns slightly to aim at target etc.) for when we update the enemies to have targeted/hit-box specific 'weak spots', i.e. head/exposed, fleshy areas. The trade-off then being that you can aim down sight at a reduction to your movement speed.

I just came across this mod today. Looks interesting, and anything on UE4 looks slick.

Just a note: I know it isn't as fun, but bullets tend to just punch tiny holes in leaves (holes small enough not to be worth simulating), so the way you can strip a tree in 10 seconds with a rifle seems a bit off to me.

About the 1st person rifle animations, I agree with the others. Look at references of real rifles being reloaded if you want a more realistic and sluggish approach. Notice things like how the magazine might bounce off the mag well on the first try. Give the animation time to suggest the player is actually retrieving another magazine from a pouch. Consider modeling some of the head movement during the reload to add weight to it.

A great example of wonderful weapon animations would be from Project Reality (BF2 mod).

I dont think this is a mod mate