The very first Renegade X beta will be released on September 30th - just a few days away! Are you ready?

Welcome to the second pre-release Renegade X update. Here we are, only a few days away from our first release.

This update contains a lot of important pre-release information. I would recommend reading it in its entirety - it's a bit lengthy, but definitely worth your time if you are interested in this mod!

Contents in this update:

That's right! As we announced in our previous update, the first release will be available on September 30th 2009, which is just a few days away. For future reference, the incoming beta version will be referred to by us as both the Renegade X Beta 1 or Renegade X Beta Version 0.35. The expression "0.35" is the version number, and it is there to emphasize that the first release is an early version of the mod - about "35%" of what our final release will be in terms of content.

If you're wondering what kind of content we're planning on adding, there is a list later in this post. After the 0.35 release, we will be steadily adding more weapons, vehicles, maps, modes, animations, and more! We also plan on fixing any possible glitches and unbalances we may run into as the mod is played in its beta state.

We've got a new podcast for you guys. In this edition, Fobby, Havoc89, and Avalanche discuss several topics, including:

Download the podcast today by clicking the following link!

Here's some screenshots our beta testers have taken throughout testing the mod: 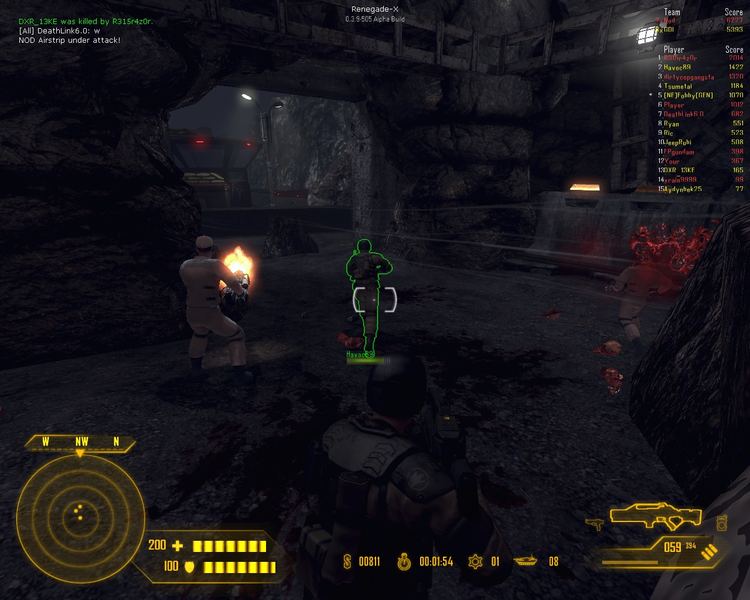 How to Play
We'll be releasing a video tutorial on release day, but for those of you who don't know too much about Renegade X's game mode Command & Conquer mode, or are simply rusty, the following "how to play" walk-through will definitely help you on your way.

Guest Event Feedback!
Last week, the Renegade X invited some special guests from around the community for an opportunity to try an early version of the Renegade X v0.35 beta build. Some of these guests that came included 2POC, who is the "second in command" community manager at EALA, RyanTheHeretic from Planet CNC, Arnyswart of Exodus, and Chris Pham from FilePlanet. Fortunately, these three special guests gave positive feedback after trying Renegade X. Here's what some of them had to say:

2POC (www.commandandconquer.com): I was very impressed with how detailed the maps were, and how true they were to the originals. I think that's going to make modding people very excited... I'm sure a lot of people haven't played Renegade in a while and I know they're going to boot this game up and they're going to remember everything from the original. They'll get that nostalgic feeling, only a lot better, because the graphics for this are ten times better... I'm gonna try to definitely get a lot of them [EA] to play it, because I know a lot of them were Renegade fans, so if we get time when we're not working, I'm sure we can get some of them to play. That would be awesome. I've been looking forward to this mod for a while, I mean it's the only reason why I bought Unreal Tournament :P I'm sure there are others that work here that are excited as well.

Chris Pham (www.fileplanet.com): Gameplay was fun, and when we had 8-9 people on each side playing it was exciting... I must say Totem Art's mod creation not only matches the original game studio but even surpasses it in some departments...Renegade-X just looks banging. This mod is leaps and bounds much better looking than the original game with all the vehicle, units, weapons, and maps looking and feeling like the genuine deal but with a good facelift. The special effects, physics, and sounds of the vehicles, gun fire, and explosions are all upgrade and make a definite impact. Renegade-X has no problem making a good first impression.

RyanTheHeretic (www.planetcnc.gamespy.com): I've been waiting to play Renegade X ever since it was announced. Thankfully, the wait has been worth it. Sure, it's not the finished deal, but it's a damn good recreation of Renegade and an extremely well put together piece of work. The graphics are fantastic (have I mentioned how SWEET the MLRS looks when it fires?) and the gameplay is just as good as Renegade was, if not better thanks to the Unreal engine. It's updated enough to feel like a good use of my HDD space, but classic enough to remind me why I loved Renegade so much to begin with. Consider me impressed.

Arnyswart (www.exoduscommunity.com): The Renegade X developers have recreated the “feel” of renegade but with an advanced gameplay engine which gives it the edge of modern games. Players can “rush” and destroy buildings, drive vehicles and battle it out on the field or grab a sniper and have some infantry action. The possibilities of this game are endless.I just have two words, “Brilliant Job”.

List of Content to be added after first release:
As you all know, the September 30th release is a new beginning for the Renegade X mod. It is the first of hopefully many public updates to the current build. That also means it does not have everything. So, what could you expect for the next releases? I've prepared a quick list, and let me tell you, there is much more to see for Renegade X in the future.

*NOTE: This list is not final, and does not represent our official plan for future builds. This is just meant to give you all an idea of what we want in the mod in the future.*

Maps:
-Many more remakes, such as Under, Walls, and Volcano, coming soon!
-Custom Renegade X maps that we plan on creating. Our own original designs with special features!

Game Modes:
-C&C mode will be expanded as more and more of the mod is released
-Command & Capture (C&C/CTF hybrid)
-World Domination
-Assault

We thank you all for following the mod for so long, but keep in mind, we're not done! The Renegade X development team will be here, pumping out patches and release candidates as time passes by. There's still quite a bit left to do on our part, but we plan on continuing the fulfillment of our promises!

Generally speaking, you can find UT3 for 9-15 USD in most local game stores. So, if you don't have the game yet, what are you waiting for? Buy one cheap game, and get the mod for free.

That's all for now. Be sure to check out Renegade-x.com and Moddb.com on September 30th to pick up Renegade X Beta Version 0.35

It will be a Wednesday, so expect the mod download to go up sometime in the middle of the day eastern time (GMT -5). If you live in a timezone far ahead of EST, the mod will be available to you on the morning of October 1st.

As for servers, we will be talking about that on our release post. We will have 2 US servers available and 1 UK server on September 30th, ready for the release. We will also have at least 4 download clients available for you all.

See you on September 30th!

Man, looking forward to playing this. Great work on the update and the release of the mod guys...

omfg you guys.... god bless you you re my heroes like superman and wonder woman you know
i cant help it but i love you all so much you made my year and also probably destroyed my score ratio in school but i don't care :D love you :*

I AM READY FOR THIS

omg cant wait to get my hands on this! GJ

Finnally! I acctually bought UT3 for this mod, now im glad I can use it!

nice my exams are done on the 30th! can't wait to play this!

Wow this looks fantastic, looks like a lot of hard work went into this, all the effects look great! Can't wait to get it :)

Those 3 servers will be full so fast, gotta be faster then you all hahahaha!

this will be epic,

can't wait, now only hope to have enough players

this should be stand alone

Out of interest how big-a download are we talking here?

The current build is around 421 MB

omg i cant wait! I wanna dust off my original Renegade to celebrate but its so long ago i cant find it anywhere! darn XD

i inventid a time machine, yust for this mod to travel forward in time end dont have to wait another 2 days!!!!! XD (yust kiding)

looking forward to the release. keep up the great work guys.

looking forward to playing this. the old renegade was king on our 5man lan parties back in the days :)

what time will it be released?

Loving the sound of the A-10.... Will you release necessary files so Servers can create their own custom map-packs similar to what happened with original Renegade and UNrules and JellyServers?

this looks insane! I am IN!

when is this comming for ps3 :(,i downloaded it thinking its for ps3 to but it said install.