Introducing some new mutators to customize and increase the realism and battle immersion for Brothers in Arms. Improved AI bots and more soldiers for multiplayer, more realistic physics, new combat dialogue, and much more!

Lots of great stuff developed over the last few months since the last news update. But first, if you aren't familiar with WarZone, here's a short introduction video:

DemonicMP, the multiplayer bots mod, has been thoroughly tested and the AI should give you a run for your money. You can play with the computer or fight alone against them (with the new DemonicMPx), and if the maps are still a little light on action you can throw in WarZoneMP to add up to 20 more AI-controlled soldiers into the mix.

Tired of watching enemies float through the air and eventually just disappearing after getting shot? Try the new WZGravity physics mutator that causes dead bodies to slump down and forward, rather than be blown backwards. Grenade trajectories and just about everything else that blows up look more realistic, too.


And when you're done killing, you can take time to smell the corpses because they aren't going anywhere with the BodyCount mod. 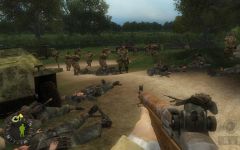 The Germans throw smoke grenades with better accuracy now, and you can use this mutator separately (it used to be part of DangerousAI). For more realism, turn off tracers for rifles and submachine guns with the NoTracers mutator.

And That's Not All

Since v3.32, you get regular US Infantry uniforms, Bazookas and Panzerfausts using pistols, more combat dialogue from both the Germans and Americans, the integrated Original Soundrack (download separately), limping wounded, action cam for soldiers diving on grenades, and a bunch of bug fixes. 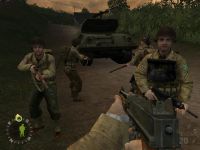 Now, who wants to play Brothers in Arms? You do, Soldier!

Download WarZone 4.0 for Road to Hill 30 and Earned in Blood

CONGRATULATIONS on making it to ModDB's front page news banner!

This mod(s) makes getting these titles a MUST.

Maybe someday we'll get a modern warfare version? Make it better than CoD, which wouldn't be hard to do. Hint, hint!

Thanks again for all of your hard work.

Thanks for the compliments! Enjoy ;)