Matthew talks a bit about numbers, the release of 2.0.4, and introduces Mr. Wallet as the new lead designer of Modular Combat.

Winston and myself have been developing Modular Combat for over 2 and a half years.

Let's run some base numbers here...we have over 285,000 hits on our Mod DB page and just over 6,800 downloads from all the different iterations of Modular Combat. Holy f*ck.

Thank you. We are, and always have been, humbled by the community's passion for Modular Combat. You have stuck with us through the ups and the downs, through the constant server crashes, through the addition of overpowered and underpowered modules...and all we can do is thank you.

That being said, I'd like to introduce a new member to our team: Mr. Wallet.

Jordan (Mr. Wallet) has been the lead designer of the 2.0.0 series for Modular Combat. He has taken on most, if not all, of my responsibilities as lead game designer since our first 2.0.0 release and I believe he's done a fantastic job.

Jordan started work with us as MC's resident systems designer. It was his job to take my crazy ideas and balance everything out. As you know, Modular Combat is a big beast when it comes to balancing modules, monsters, guns, and everything else we've decided to throw in there, but Jordan has been working it out and I believe he's done admirably.

What can I say about this release? Well, it's business as usual. We crushed some bugs, improved stability, and make the overall MC experience a little more pleasant for you all. Besides bugs and statistics collecting (for future balancing), we gave a little bit of love to the Vortigaunts this release. You'll notice a new model for the monsters and a new monster type: Blast Vort.

I was messing around in the beta earlier this week, and I must say...that green bastard scares me. 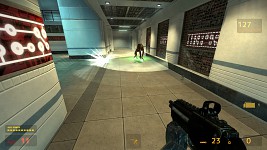 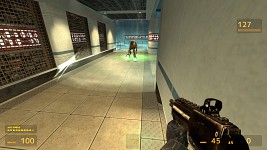 So with out further ado, here is the changelist for MC 2.0.4:

So why step down as lead designer?

Over the past few months (and last year, let's be honest), I've gotten far more busy with the rest of my life. Modular Combat suffered a bit for this. But MC isn't a game I could ever give up on. I didn't want to see the community die out, so I did the best thing I could...I let someone take the reins.

I've been working with Jordan for over 8 months now. I have faith in his vision for MC's future (he's got the releases planned out up until 2.1.0, no joke) and I honestly believe that he'll be able to take Modular Combat to a level that I am not able to.

That being said, I will always be here as your community manager and PR guy.

Thanks again for being apart of Modular Combat.

Haha, I guess so!

It would be epic if there were actual people playing in the servers! :(

still small amount of people in servers once in a while, but also fun 2 play alone.

Thanks for the reply and review! Cheers!

If I had HL2 I would get this!

it needs EP2 not HL2

Still I have neither does it work with Orange Box

The Orange box has HL2 and Ep2