Loads of news! We have announced the release date, we got a cool exclusive The Ball character for Killing Floor, and our Mystery Monday contest has come to an end. Solve the mystery and win a copy of The Ball and Killing Floor!

Long time no update here on ModDB/IndieDB! Loads and loads has happened in the mean time. The most important news is that we got various distribution deals into place and that the game is very close to going on sale! The Ball will be released on Steam, Gamersgate, Impulse, Direct2Drive, and in stores world wide. European retail will be taken care of by Iceberg Interactive, Scandinavian retail by Wendros, and Russia by Akella. North America is covered by Tripwire Interactive.

Yesterday we announced the release date, and an exclusive Killing Floor DLC character for those who pre-order the game!

Press-Release wrote: Tuesday 5th October, Roswell GA: Tripwire Interactive and Teotl Studios are pleased to announce that their upcoming first person action adventure puzzler – The Ball – has gone Gold. The Ball will be released on 26th October 2010 through Steam and eastern European retail stores and will roll out through other digital outlets and worldwide retail soon after. Pre-orders on Steam start 18th October 2010 with a special exclusive bonus for Killing Floor owners that get on the ball and pre-order before the 26th – the hero from The Ball as a fully playable character in Killing Floor!

“We are really happy to see The Ball get a full commercial launch. It is the first UDK-based game to get into stores and the previews show just how much a group of talented developers can achieve with the toolset,” said Mark Rein, Vice President of Epic Games. “Like previous success stories from the Make Something Unreal contest, such as Red Orchestra, it is a highly-polished standalone product – and a great fun game, too! This is a great example of why we put the effort into supporting the community with the UDK and the MSU contest.”

The game will be available on Steam and in stores from 26th October 2010 for $19.99. For further information on the game visit the game website: Theballthegame.com or The Ball Steam Store Page.


Furthermore our Mystery Monday contest has come to an end! The goal of Mystery Monday is to find the 11 hidden words that we have hidden in our backstory. We have given away<!-- m --><!-- m --> the solution to the first one to get people started!
The words can be hidden in numbers, photos, texts, and so on. The words we are looking for are single words or names. They do not contain spaces or non standard characters, nor any numbers. 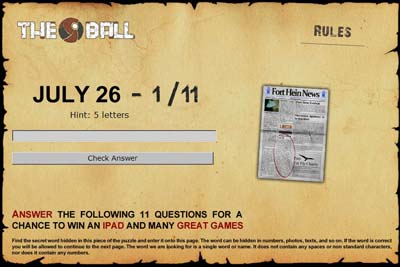 
There are currently 12 winners already, so while the Ipad may be gone already, there are still dozens of games to win!

a gun would be more useful in killing floor. u could just shoot the fleshpound away like the ball. other thing: do we gonna have an sdk?

Im pretty sure that the character in killing floor is only the model, and uses the same weapons like all others in KF.

i was talking about a gun what could be used in all the skins and perks. nobody really cares about the skins, i only see myself if i die, and i dont :D ppl only buy the dlc to support tripwire.

I assume an SDK will come as the TW/Ball forums have a modding section in there.

how much will it cost? there is no price at steam yet

"The game will be available on Steam and in stores from 26th October 2010 for $19.99. For further information on the game visit the game website: Theballthegame.com or The Ball Steam Store Page." use your eyeballs to read

Yeahh, I'm all up for buying DLC Characters for Killing Floor, but it's mainly to support Tripwire. (I bought the first pack and have only used the welder, really). I really didn't care enough to download this game while it was a mod, I don't think I'll be buying it. Good luck

lmao, i cba with the puzzle

I predict: sells less than 5000 units then is being shoved to the cheap lane or bundled with other indie games. The ball has everything going for it - except really interesting gameplay. It annoyed me every single time I played it.

Sadly I must agree here, the early versions that were available (probably as a part of MSU contest) didn't really impress me gameplay-wise. And like SinKing said: this game has it all, interesting art-style, good story, good art, excellent level design, good idea, good audio etc. etc. but when the rubber hits the road result just wasn't what I expected it to be. I hope your commercial version has better gameplay, in that case I'm definitely buying. Good luck!

ModDB, Epic Games, ~19 previewers, and the 4 publishers who signed up for the game seem to think otherwise.

Perhaps it is just not your type of game. Can happen. It is impossible to make a game that every person on this planet likes.

the character really reminds me of indiana jones ~_~

i belive thats their inspiration.