Update 0.4.2 brings big art update, number of new features, bug fixes and improvements based on feedback. As mentioned in earlier releases, current work is focused on bringing in missing art and making sure there is no game braking bugs. So let's shed some light on what this release has to offer.

Avatars
Finally all heroes have avatars. No longer black & white generic faces. Each hero's avatar has been hand drawn and only piece of art that is missing now in Dark Gates is heroes representations in fight screen. This is aimed to be done within next release. Also please welcome a new hero - Matthias. He is a unique character as this is only hero that have a single weapon. His longsword requires two hands, but damage is grater that regular one handed sword. Matthias is a winner of indiebundle.com competition, please make sure he is well used in game as he needs some practice. 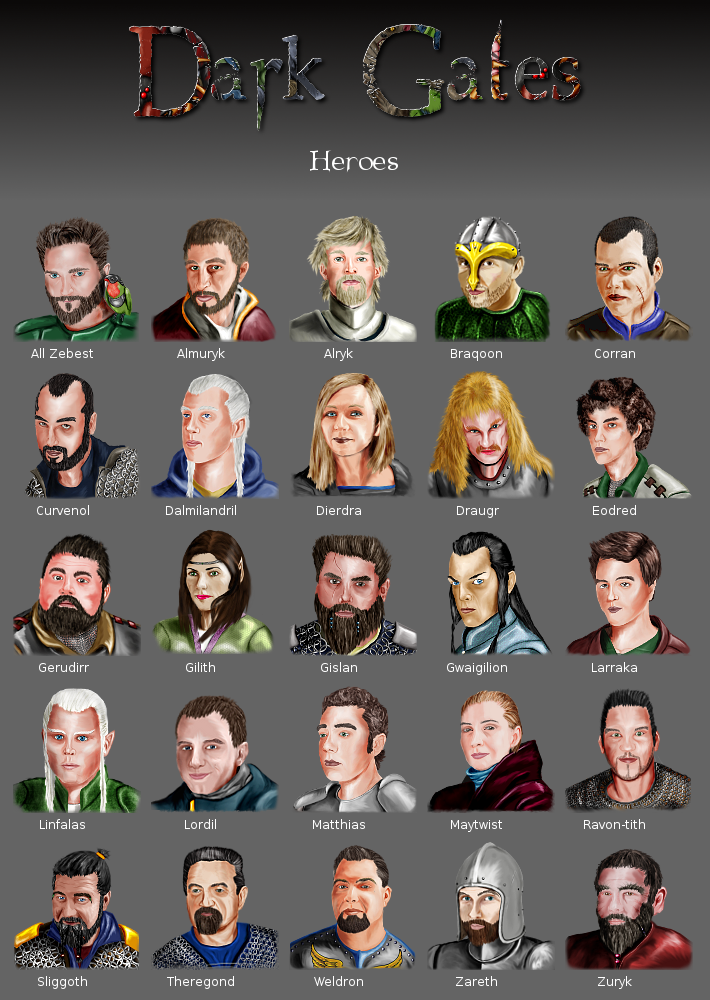 Translations
This release also features new German translation by Thomas Faust. Work also has been done to open language files to anyone who wants to contribute and translate Dark Gates to his/her native language. For quick tutorial please go here

Bug fixes & speed improvements based on feedback
Thanks to your feedback, reviews and some testing, three quite big bugs has been fixed. Hopefully that means no more crashes to OS. I had lot's of feedback about how slow main exploration of labyrinth is. With this release speed of movement has been increased so exploration is now much faster. Of course feedback on this change is also much appreciated.

Sale
As there seems to be now season for sales, Dark Gates will be not left behind. Game is 50% off till the end of July. Have a great summer.

Very nice update. The game is very stable now and artistically more coherent with all the portraits and as funny as before if not funnier. I am looking froward to looking at the new battle figures next time. I just regret my caracter be so underpowered (my strokes only hit 50% of time).

Do not despair, character balancing is still to be done.

I gave you a karma point for that.

Great Update! The game gets better and better. I love it. Keep on your great work!